G.A.O. Assesses Nation's Energy Security And The Negative Effect On Maritime Industry The Export Administration Act of 1979 places restrictions on the export of Alaskan North Slope crude that effectively ban its export. The act states that "no domestically produced crude oil transported through the Alaska pipeline may be exported from the United States." The purpose of this ban was to restrict "the export of goods where necessary to protect the domestic economy from excessive drain of scarce materials and to reduce the serious inflationary impact of foreign demand." This provision of the law was part of the compromise that permitted the construction of the Trans-Alaska Pipeline. The act allows the ban to be lifted only upon the President's certification that the export of Alaskan oil is in the national interest and meets several other specified conditions.

ports, i.e., those on the East Coast, the Caribbean, and the Gulf of Mexico, will probably cease at some time in the next several years.

If the ban on exporting Alaskan North Slope crude oil is removed, some of it is likely to be exported to Pacific Rim countries. Since transportation costs to Pacific Rim ports are much less than those to eastern U.S. ports, oil that is currently transported to the eastern United States is likely to be exported. In addition, some Alaskan North Slope crude that would have gone to the U.S.

West Coast may also be exported, since the cost of transporting oil to some Pacific Rim destinations is comparable to, if not lower than, the cost to U.S. West Coast ports. In this regard, the heavier weight of Alaskan North Slope crude is more likely to be attractive to refiners in Pacific Rim countries that it is to U.S. West Coast refiners, who refine more of their oil into light products, such as gasoline.

The energy supply disruption resulting from Iraq's invasion of Kuwait has focused attention on U.S. energy security and, in particular, our reliance on imported oil.

From an energy security standpoint, the effect of lifting the Alaskan North Slope export ban would probably be to increase total U.S. oil imports but possibly decrease net imports (total imports minus exports) to the extent that refinery efficiency is improved and Alaskan North Slope oil production increases in response to higher prices. Finally, lifting the ban could also contribute to the integrated world market's smooth and efficient functioning.

This trend is expected to continue, so that in the near future Alaskan North Slope crude shipments to eastern ports will cease. The exact timing of this development will depend to a large extent upon the rate of decline of Alaskan production.

Using the Energy Information Administration's (EIA) base case assumption of Alaskan production, shipments to eastern ports could cease by 1992, even if West Coast demand for Alaskan production remains constant.

If the ban on exports of Alaskan North Slope crude is lifted, industry and public authorities generally agree that the oil now shipped to eastern U.S. ports—about 300 mbd—will be exported to Pacific Rim countries. This will occur, to a large extent, because such action would reduce transportation costs by a considerable amount. This reduction in transportation costs would increase the amount Alaskan North Slope producers receive for the oil.

In addition, some of the oil that is now shipped to the West Coast may also be exported, but opinions vary on how much. A possible maximum impact of lifting the ban might be one in which the only Alaskan North Slope oil that would continue to be shipped to the West Coast would be oil used by integrated oil companies, that is, those that produce oil in Alaska and transport it to their own refineries on the West Coast. In 1989, these companies used around 570 mbd of Alaskan North Slope crude.

If the ban is lifted and some of this oil is exported, foreign-flag tankers, because their costs are lower, are likely to transport that oil. This will accelerate the loss of U.S. ships, which will be laid up, scrapped, or sold anyway as Alaskan North Slope production decreases.

Between 1989 and 1995, the Maritime Administration (MarAd) estimates that 32 shi^*s will be lost because i f declining Alaskai North Slope production, even if the ban stays in place. However, if the ban is lifted and exports begin in 1991, the same losses occur as in the minimum exports case, but earlier. An additional seven ships are lost if there are maximum exports.

The loss of these ships would also affect the national defense through reduced availability of U.S.-flag, "militarily useful" tankers; the federal budget through possible guaranteed loan defaults; and national unemployment by threatening seafarers' jobs.

Second, it would possibly lead to a decrease in net imports. Finally, in an integrated world oil market, U.S. energy security depends in large part of this market's smooth and efficient functioning.

Lifting the ban would probably lead to gains in economic efficiency.

However it would also have a negative effect on independent refiners on the West Coast and certainly on the U.S. maritime industry. 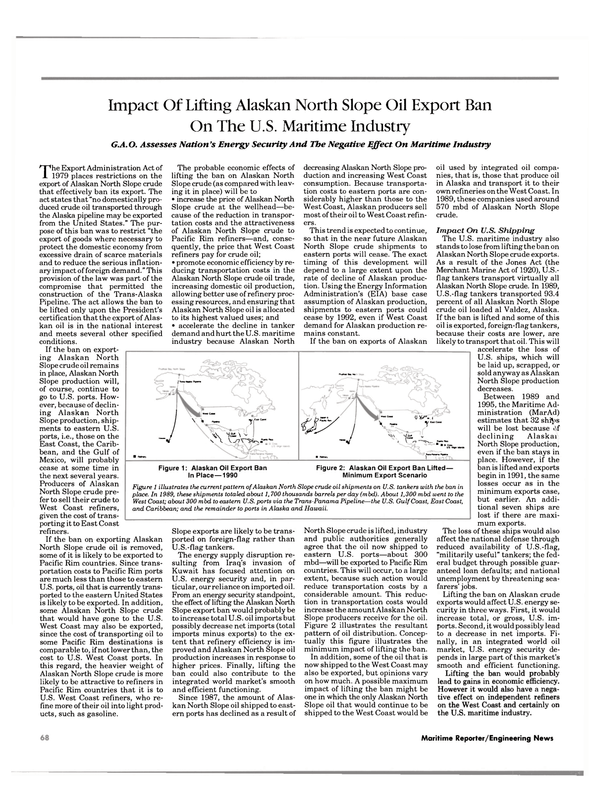