Autohydro 5.2 was recently released by Autoship. The following are some of the more salient new features of the product. Torsion moments are calculated for all ship loading conditions.

Moments of inertia are calculated for tank contents and can be user-defined for lightship and added weights. Vessel total moments of inertia (about all three axes), radii of gyration (about all three axes), and rolling and pitching periods can also be calculated. There is a new draft comparison routine, allowing the user to easily calculate constant weight.

The user can now input either distributed or point-load weights in userdefined groups. Lastly, the user can view a body-section at any specified longitudinal location.

Autoship is developing a totally new ship structural design program, Autostructure. It will run on NT 4 or Windows 2000 workstations, with NT Server 4 or Windows 2000 to host large networks. The program will be launched in stages, with release of the first stage expected for last month. For 2-D editing of flat parts, and for drawing production, Autoship chose AutoCAD 2000.

Given that AutoCAD is already used in many ship design operations, Autoship feels that incorporation of AutoCAD 2000 will be viewed as another advantage of Autostructure. Shipyard staff will not need to be trained on new 2-D drawing software; training costs will be reduced accordingly. An important new technology, Microsoft's Common Object Model (COM), is being used 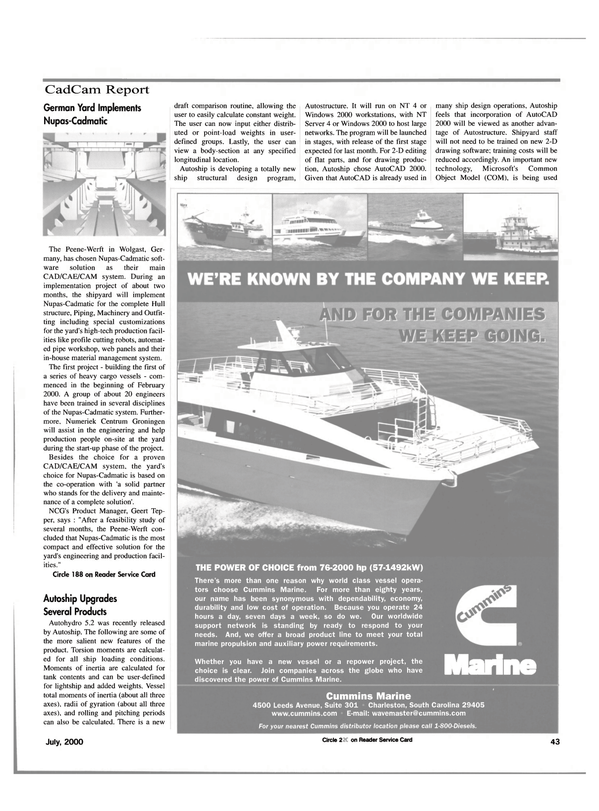