Ever since two enterprising reporters for the Baltimore Sun decided, in 1997.

to take a closer look at ship scrapping, first at a Baltimore shipyard dismantling a Navy ship, and subsequently an in depth review of scrapping conditions in Alang, India, the light of public attention has been shining on this oldest of maritime practices.

With this scrutiny, the world of scrapping ships will be forever changed — hopefully for the better.

Background Following the end of the Cold War, the Navy's downsizing its fleet, and the requirement to replace tankers with more modern and environmentally safer ships, the demand to decommission and dispose of obsolete vessels is increasing at a pace more rapid than the capacity exists to handle this demand. Certainly, this is true in the U. S. And therein lies the nub of this debate. Should the U. S.

be required to dispose of obsolete government vessels, from the Navy and the Maritime Administration's (MarAd's) National Defense Reserve Fleet (NDRF), only in U.S. shipyards and facilities? The Clinton Administration, and some Members of Congress, have clearly answered this question in the affirmative.

Between the Navy and MarAd, the Government has close to 200 obsolete vessels to dispose of over the next 10 years, or sooner if possible. Because of their age, these ships contain a number of hazardous substances, including asbestos and solid and liquid polychlorinated biphenyls (PCBs) - all substances now banned or highly regulated by the Environmental Protection Agency (EPA). Also, due to their age, a number of these ships are in very bad or deteriorating condition, and could well be causing environmental degradation to the very U.S. waters and rivers in which they are presently moored. In the case of MarAd, it spends millions of dollars each year simply to maintain and preserve these ships in three NDRF sites around the country.

U.S. Shipbreaking Capacity Does the capacity exist in the U.S. to dismantle this number of obsolete ships? Probably not at the present time.

And. certainly not without additional financial incentives from the Government to encourage more shipyards or shipbreakers in the U.S. to get into this business. At one time, U.S. yards did break up ships, but this largely changed in the 1980s when overseas yards, including those in India and Bangladesh, took over this responsibility.

In these Asian nations, labor was cheaper and environmental standards were certainly lower. At the same time, the price of scrap metal and steel was much higher. (For a piercing picture of the conditions in an Indian scrapyard, see the above-mentioned Baltimore Sun series.) However, after the Clinton Administration imposed a moratorium on the export of government vessels for overseas scrapping, U.S. yards have gotten back into the business.

Consistent with the moratorium, an interagency panel report on ship scrapping, and legislation sponsored by Senator Barbara Mikulski of Maryland, the Navy has recently embarked on a pilot project to ascertain the "true" costs of dismantling a ship in the U.S. in full compliance with U.S. environmental laws and regulations. In September 1999, the Navy awarded four contracts to four companies to scrap one ship apiece for the Navy. The awards were made to Baltimore Marine Industries, Inc., of Baltimore, Md.; International Shipbreaking Limited, of Brownsville, Texas; Ship Dismantling & Recycling Joint Venture (of New Hampshire and Virginia); and Metro Machine Corp. of Norfolk, Va. The Navy paid these companies between $1.8 million and $3.8 million apiece for the disposal of four decommissioned frigates. The proceeds from the sale of the scrap is to be credited toward the value of the contract. If the scrapping at these facilities is successful, they could receive other contracts for scrapping the remaining 55 vessels in the Navy Inactive Fleet designated for scrapping.

MarAd is required to dispose of more than 100 obsolete vessels by September 30, 2001, a deadline that the agency recognizes it cannot meet. However, unlike the Navy, to date, MarAd has not been given the financial resources or the authority to pay U.S. yards for scrapping.

Most MarAd ships are being broken up in Brownsville, TX, although one company recently defaulted on its contract. In the meantime, MarAd has had to expend considerable funds to maintain the ships in its Reserve Fleet sites located in the James River, Virginia, Suisun Bay, California, and Beaumont, Texas. A report by the Inspector General of the Department of Transportation, issued in March 2000, recommended that MarAd seek new legislative authority comparable to the Navy's and extend the deadline for scrapping its remaining ships. MarAd has requested an extension to 2006.

International Attention The U.S. is not alone in examining its ship disposal practices. Heightened scrutiny by Greenpeace, the Basel Action Network (BAN), and the International Federation of Transport Workers, among others, is forcing international organizations as well as foreign scrapping nations to reexamine their laws and practices. As noted above, the majority of scrapping in recent years has taken place in India, Bangladesh, and Pakistan, although China is also scrapping foreign ships.

The U.S., and most other interested maritime nations, prefer to have ship scrapping reviewed by the International Maritime Organization (IMO), headquartered in London, and made up of most shipping nations. In March 2000, the IMO agreed to have its Marine Environment Protection Committee look at current practices in shipbreaking, including the possibility of having all toxic substances removed before the scrapping takes place. A Correspondence Group, under the leadership of Bangladesh, is undertaking this review. 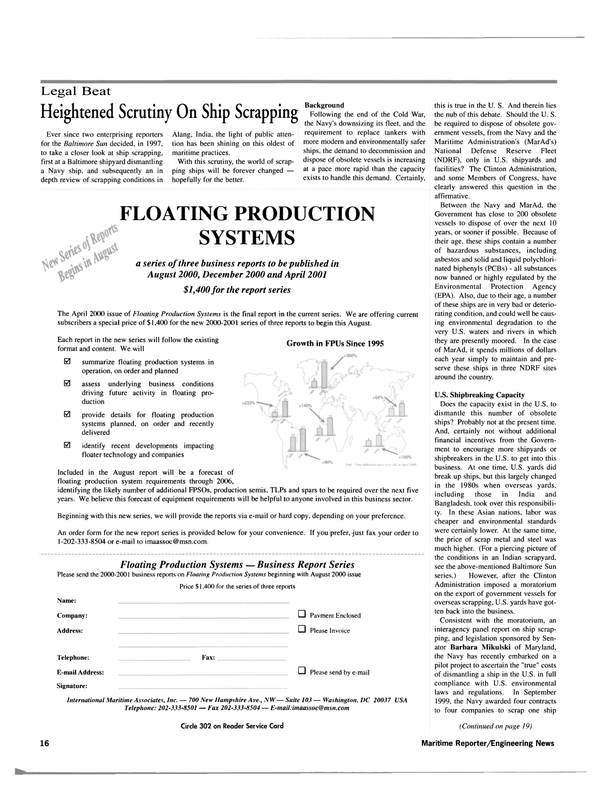