FGH moves to get house in order

Those searching for tangible effects of a dramatic offshore drawdown need look no further than Friede Goldman Halter. The company, which was riding a crest of business powered by key acquisitions in the mid-90s, saw its plan thwarted when a host of factors conspired to drive oil prices into the ground. The result is a company which is managing a large amount of debt while positioning itself to regain its position atop the Gulf of Mexico boatbuilding and repair heap.

Although the company's backlog stands at an impressive $543 million, nearly 73 percent of that is due for delivery by the end of the year, and the boatbuilding market in the GOM area is still recovering and considered overcrowded by some, placing further price pressures.

Last month the company announced that it sold its vessel repair unit to Bollinger Shipyards Inc. for $80 million.

The all-cash deal with the Lockport, La.-based company, which is expected to be completed this month, is structured as an asset sale and is subject to certain regulatory conditions.

The vessel repair business is an operating unit of Halter Marine, Friede Goldman Halter's Vessel segment, and consists of five vessel repair and maintenance facilities devoted in Louisiana and Texas. The company expects the $80 million transaction and an additional $33 million in tax refunds to be collected during 2000 to provide "significant additional liquidity for Friede Goldman Halter as it enters a strengthening marketplace." In another move to secure its financial future, it was announced that Friede Goldman Offshore Texas has reached a decision with Petrodrill IV and Petrodrill V concerning contract disputes over Friede Goldman's construction of two Amethyst-class deepwater semisubmersible drilling rigs for Petrodrill. The agreements have been approved by the boards of directors for both companies by MarAd, which is providing loan guarantees for the project. The agreements call for the new delivery dates of Amethyst 4 and 5 to occur on September 15, 2001 and December 15, 2001, respectively.

Both parties have agreed to increase the float-out milestone payment by $3 million per rig and to a final $6.4 million payment per rig at delivery, resulting in a new contract value of $186.8 million based upon the new delivery schedules. Both companies have also decided to terminate all pending litigation related to the project. 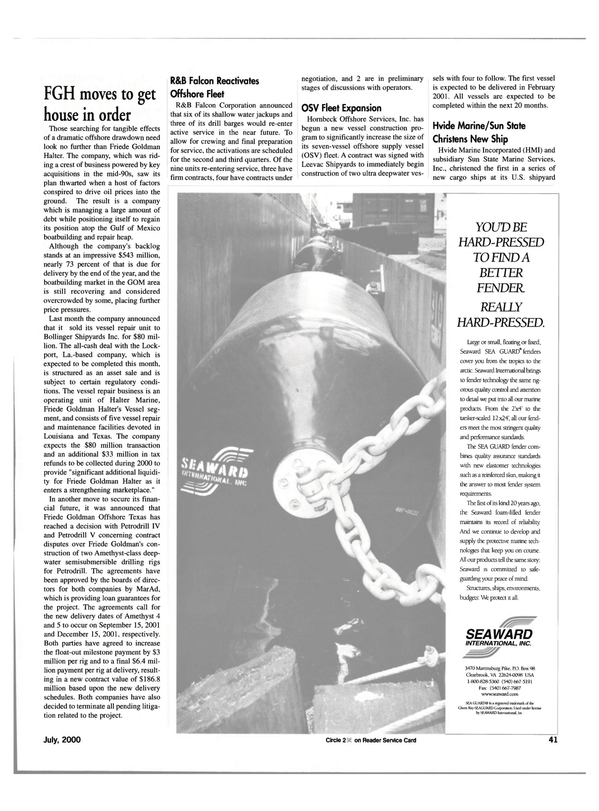 Read FGH moves to get house in order in Pdf, Flash or Html5 edition of July 2000 Maritime Reporter