Several recent deals have confirmed the continuing trend towards a consolidation of resources in the realm of marine propulsion equipment. The trend, to regular followers of the industry, is hardly a new development.

However, a spate of recent new deals and consummations has brought the topic to the forefront again.

As reported in the June 2000 edition of Maritime Reporter & Engineering News, the emergence of Rolls Royce as a major force in the field of marine propusion is solidified with a collection of brand name equipment suppliers. The U.K. based organization has a true global reach, and is a threatening force to dominate any market, which it chooses to enter.

"We welcome the new British members of the MAN B&W Diesel team to the MAN family," said Dr. Hans-J. Schulte, president of MAN B&W Diesel. "We will strengthen their technical and brand identities, thus bringing a wider range of products into a wider range of markets and placing more resources at the disposal and to the benefit of our customers." The U.K. company manufactures diesel engines under the long established Mirrlees Blackstone, Ruston and Paxman brand names, which will continue to be strongly promoted. The existing engine programs under these brand names will also continue and will be complementary to the extensive range of engines in the power bracket between 500 and 68,640 kW being designed and produced by the MAN B&W Diesel Group at its other locations in Europe. Mirrlees Blackstone 500 - 600 rpm medium-speed engines find application in the base load power generation in markets up to 15 MW per unit.

Ruston 750 - 1,000 rpm medium-speed engines up to 9 MW are widely used in power generation, marine propulsion and rail traction applications and it is the leading brand in engines for large high-speed ferries. Paxman high-speed engines are well known in applications demanding high power density engines up to 4 MW including power generation, high-speed marine and high-speed rail traction applications. The U.K. company also manufactures Diesel engine governors and control systems through its Regulateurs Europa subsidiary and has a high quality iron foundry in Stamford.

MAN B&W Diesel AG is a market leader in marine propulsion engines for commercial shipping. The MAN B&W Diesel Group employs some 6,000 people world-wide and has an annual business volume of $1.1 billion. The acquisition will bring an additional workforce of approximately 1,500 and annual sales of some $200 million. Wartsila NSD also made headlines when it announced that it and the TI Group, on behalf of John Crane-Lips, signed of a co-operation agreement to develop, market and supply total marine propulsion power systems to the shipbuilding industry. Agreement has also been reached for TI Group to purchase Wiirtsila NSD's propeller production and related servicing business at Rubbestadneset, Norway, with approxi- mately 120 employees transferring from Wartsila NSD Norway to John Crane-Lips.

"This agreement is an important milestone for Wartsila NSD in developing our position as The Ship Power Supplier," said Ole Johansson, president and CEO of Wartsila NSD. "The requirement for integrated solutions is increasing within the industry and Wartsila NSD is well placed to respond to that need." Wartsila NSD has a substantial share of the marine engine market and John Crane-Lips has a leading position in the market for integrated propulsion systems, including propellers, waterjets, thrusters, shaft seals and bearings. Under the brand name, Wartsila- Lips, customers will be offered total marine propulsion power systems from a single source, integrating all aspects of propulsion and maneuvering systems from the engine, through the gear box to the ship's propellers and controls.

The global commercial shipbuilding market is expected to grow significantly over the next decade. In the face of competitive pressures, environmental regulations and greater complexity in ship design, shipowners and shipbuilders are now seeking to outsource substantial elements of ship construction, including marine propulsion power systems, to suppliers. Under the co-operation agreement, Wartsila NSD, with 560 marine support people worldwide, will act as prime contractor to shipyards for total marine propulsion power systems. It will provide diesel engine based prime movers and gearboxes while John Crane-Lips will supply on-board propulsion and sealing systems. Using innovative and advanced technology, the co-operation agreement addresses the entire commercial marine market, from fishing vessels and tug boats to cruise ships and VLCC's, as well as defense markets, and should provide significant growth opportunities for both companies.

Both Wartsila NSD and John Crane-Lips retain the right to market their own product ranges independently. 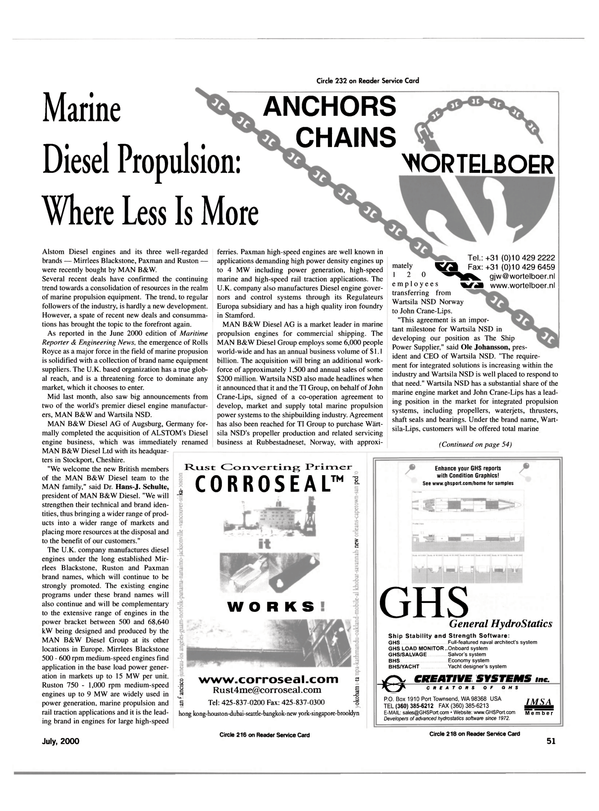