Celebrity Links Its Past To Its Future With Millennium

Celebrity Cruise Lines experienced its own "Night At The Oscars" by literally rolling out the red carpet this past June for its inaugural christening ceremony of its new "Millennium" while docked in Southampton, U.K. MR/EN was invited to Southampton to spend a few days onboard this technologically driven vessel before it departed for Amsterdam to begin its maiden voyage - a 14-day journey around Russia and the Baltics.

— By Regina P. Ciardiello, associate editor Incorporating old-world style and classic ambiance with its Olympic Restaurant, which houses the original paneling from the R.M.S. Olympic — and delving into new technology by implementing a premiere gas turbine system in its engine room — Celebrity's newest vessel truly exemplifies a "bridge between two centuries," as stated by Royal Caribbean's (RCCL) chairman and CEO, Richard Fain at Millennium's christening on June 26.

Fain, who oversees RCCL, which is Celebrity's parent company, along with the latter's president, Rick Sasso, made history in the cruise industry with their decision to install the gas turbine system on the 965-ft.

In an industry that has relied on diesel engines for power, many executives were not receptive at first to this new innovation. Diesel engines always have, and continue to, capably perform the job of moving these large floating cities, so why would Celebrity want to fix something that wasn't broken? Eventually the gas turbine concept was seen as a new breed of power for cruise ships by none other than Demetrios P. Kaparis, Celebrity's senior executive vice president, newbuildings.

Kaparis, who is a firm believer in this new form of vessel power, had designed, administered and supervised work at Meyer Werft's Papenburg shipyard during the construction of all of the company's existing vessels — as well as the current Millennium that was constructed at French-based Chantiers de l'Atlantique.

And who better than Kaparis himself to be the company's firmest believer in its new vision; Kaparis has an impressive technical background that began in 1961 when he joined London-based Chandris Lines as a naval architect and marine superintendent engineer. An added plus is his experience with both turbine and diesel engine operations with noted companies as Vickers Armstrong Shipyards, Austin and Pickersgill and George Sulzer Diesel Works in England.

In fact, since Kaparis has such a broad-based background in naval architecture and has also been described as one of the industry's top experts in specialized safety implementation, he designed and supervised construction of Millennium to expertly meet all the IMO Regulations and SOLAS Requirements without any obstacles. His own innovations on the vessel include a special sprinkler system called HI-Fog, which in case of fire is activated by a light mist rather than the conventional shower spray. Kaparis explained that the HI-Fog system is better suited for ships because it is able to cool down the fire quicker and is less damaging to interiors on which it is sprayed. He can also be credited for any safety devices that have been implemented in Millennium's bridge room. Kaparis' mission of "Eternal Vigilance is the Price of Safety," which is emblazoned on a plaque in the vessel's bridge area, was created through his own safety center that is up for recommendation to IMO for mandatory placement on all cruise vessels.

Celebrity's History in the Making The gas turbine concept became a reality in November 1997, when S&S Energy Products, a GE Marine Engines Systems Supplier, located in Houston, Texas, received a proposal from Celebrity outlining its desire for the gas turbines. Subsequent to the cruise line's contracting of Chantiers as Millennium's builder, S&S traveled to the French yard in March 1998 to further convince its engineers that gas turbines were a more integrated approach.

David Whisenhunt, who is vice president, general manager of Commercial Marine Systems at S&S remarked that "gas turbines had been trying to break ground since the late 1980s," so it is accurate to say that this would be a major event in the cruise industry if Chantiers agreed. The outcome was favorable and since the vessel had already been configured to fit a diesel engine package — the yard's engineers had to implement some fine-tuning.

"The engineering team at Chantiers did a great job in optimizing the space that had to be reconfigured for the gas turbines," Whisenhunt said.

Celebrity opted to install a pair of GE LM2500+aeroderivative gas turbines, using a combined gas and steam turbine integrated electric drive system (COGES) configuration — an extremely efficient use of energy: Energy that would otherwise be lost in the exhaust from the gas turbines is captured to produce steam from boilers for the steam turbines. The gas turbine-based system powers electric motors that move the vessel through the water. COGES is also responsible for all onboard power requirements, including ventilation systems, electrical power to light cabins and air conditioning.

According to Kaparis, who hosted MR/EN's all-encompassing tour of Millennium's engine room, the box holding the turbines takes up about 59 ft. (18 m) — while the actual turbines themselves measure about 26 ft. (8 m) each.

These measurements allowed for the addition of 50 extra passenger staterooms, measuring 170-sq. ft., as well as 20 additional crew cabins. Aside from the engine room's main event, which is undoubtedly its gas turbines, the vessel also boasts the latest black and gray water treatment systems equipped with technologically advanced waste handling environmental equipment. While the turbines offer the environmentally friendly 80 to 90 percent reduction in exhaust emissions and noxious gases, Celebrity has gone a step further in its environmental safety precautions with a flue gas cleaning system and de-ashing incinerators. This concept ensures a "green ship" status at all times with no discharge and stringent monitoring of emissions and residuals at sea and port conditions.

Kaparis pointed out that the 21,000 maximum kW turbines offer less noise and vibration from the engine room.

Even those who hold staterooms on the lower decks closer to the engine room will feel virtually no effects from the bowels beneath.

Trendsetters in the Making While Celebrity will be forever known as the cruise line to implement a world premiere piece of technology to its vessels, two other cruise lines. Princess and Carnival-owned Holland America, have decided to follow Celebrity's trend by outfitting their respective newbuilds with this innovation.

Celebrity is not stopping with just one new product incorporating the gas turbines.

The company has contracted Chantiers to construct three additional vessels that will round out the Millennium Class series. Known as Infinity, Summit and unnamed, the vessel trio is scheduled for completion in January 2001, August 2001 and April 2002, respectively.

In addition, Royal Caribbean plans to employ LM2500+ gas turbine-generator sets for main propulsion and onboard power for its four new Vantage-class ships that are currently under construction. 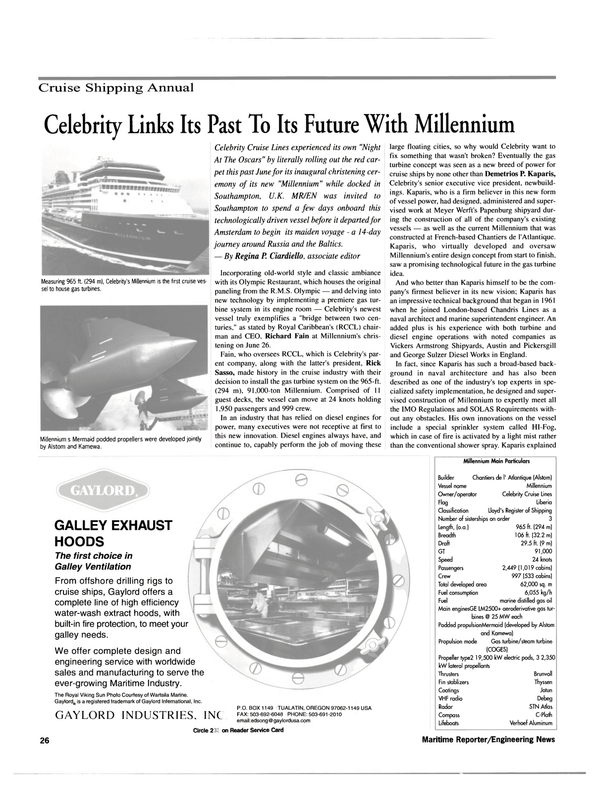 Read Celebrity Links Its Past To Its Future With Millennium in Pdf, Flash or Html5 edition of July 2000 Maritime Reporter