The Gulf of Mexico offshore market is quickly shaping up to be the driving maritime force of 2001 and beyond.

While the market today is, and will always be, largely dependent on the political wranglings of OPEC nations, the recent consolidation which has swept the oil majors and, to some degree, the offshore drilling and supply and service companies, has helped to alter some of the traditional instabilities.

For example, despite the fact that the price per barrel of oil has elevated to and remained in the mid $20s to low $30s for much of the year, offshore activity in the Gulf of Mexico has been sluggish to initially respond. While it appears that offshore business in the region will rebound strongly in the latter part of 2000 through 2001, the more measured approach to the business of discovering and recovering resources in the Gulf of Mexico should be a welcome sign to the myriad of businesses which depend on a healthy market for sustained business.

The following is excerpted a report entitled Market Prospects for Floating Production Systems, produced quarterly by International Maritime Associates, Inc. (Washington, D.C.), which discusses in great detail the spending plans for all offshore producing areas in the next several years Current Situation There are now 116 floating production systems in operation worldwide. This is an 81 percent increase over the inventory of floaters reported in September 1996. Another 60 floating storage vessels (without production capability) are now in operation, two of which are for LPG storage.

Currently, 28 percent of the FPUs in operation are situated off Northern Europe, 23 percent off Brazil, 20 percent in Southeast Asia/China, 10 percent off West Africa, nine percent in the Gulf of Mexico and seven percent off Australia.

Hulls or topsides for systems currently on order are being built at 19 facilities.

These facilities are spread worldwide - 6 yards in Europe, 7 yards in Asia and 6 yards in North America. U.S. facilities that have garnered orders including Amfels, Friede Goldman, McDermott, B&R Greens Bayou and Omega.

Future Prospects International Maritime Associates has identified 210 floating production systems planned or under study, an increase of about five percent over the number of planned projects identified in our previous report. These are projects where a floating system is being considered as the production solution. Some are in the advanced design or bidding stage - some are at an early stage of consideration.

Proceeding with individual projects will hinge on the economics of the discovery, which in turn will be influenced by the expected price of oil and project development cost. Not all will materialize and in some cases another production solution will be selected. Other projects are likely in the planning and study phase where there is no publicized information.

116 Floating Production Systems and 60 Storage Vessels are in Operation as of April 2000.

The Drivers Oil market fundamentals continue to strengthen. The outlook for world economic growth continues to be good, forecasts call for oil demand to increase and the oil producers appear to have engineered a soft landing for oil prices.

According to the IMF, the world economy in 2000 will expand at a significantly higher rate than the rate of growth over the past several years. Reflecting buoyant conditions in the world economy, the IEA expects world demand for oil to increase 2.2 percent this year.

This is significantly higher than the 0.8 percent and 1.7 percent growth in oil demand in 1998 and 1999. Details for global oil demand are shown on the opposite page.

The offshore sector is about to see the arrival of a large number of new deepwater drill rigs able to operate on fields to 3,000 m water depth. More than 40 semisubmersibles or drill ships were ordered between 1996 and 1998 - the last 25 of which are to be delivered this year and early 2001. This equipment will provide tremendous additional capability to explore and appraise deepwater fields in the Gulf of Mexico, off- shore West Africa and elsewhere.

A recent survey of 177 oil and gas companies by Salomon Smith Barney found that worldwide upstream spending in 2000 will be 11.4 percent higher than last year. Companies surveyed indicated that they plan to spend $92.6 billion on oil and gas E&P this year vs. $83.1 billion last year. A survey by Lehman Bros, at the end of last year found that worldwide exploration and production budgets will increase by 10 percent in 2000. The companies surveyed based their budgeting for 2000 on an assumed average price of $19.25 for WTI crude. While these forecasts are bullish, the E&P budgets for 2000 will likely be even higher should there be a sustained crude price higher than those assumed in the surveys.

Responding to political pressures, two bills have been introduced in Congress to provide tax breaks to encourage exploration and development in the U.S. One bill would enable producers to expense geological and geophysical cost of E&D.

While these are relatively modest initiatives and there is little expectation that the bills will pass Congress this session, they may be forerunners of a variety of initiatives designed to ramp up onshore and offshore E&D activity in the U.S.

The Deep Water Royalty Relief Act of 1995 was an earlier initiative that certainly got the interest of field operators in the Gulf of Mexico. 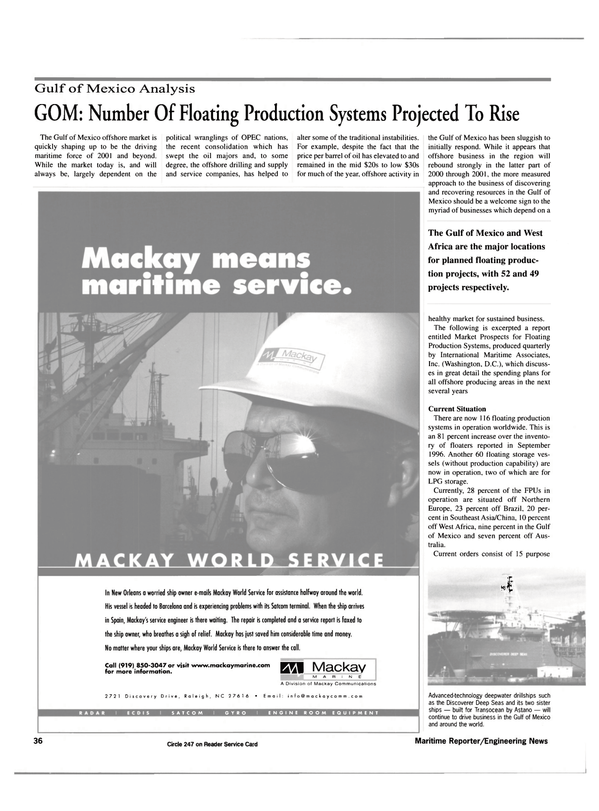