Expanding upon the Cat 3000 line of engines introduced in 2000. these versatile.

Caterpillar initially offered the 3056 propulsion engine as the first in a new line of compact, fuel-efficient marine propulsion engines based on an environmentally friendly, in-line six-cylinder, four-stroke cycle diesel design.

Operation is quiet and clean with extremely low emissions levels, and the engines are environmentally friendly with no visible smoke throughout the engine's operating range.

The engine is designed to offer owners low fuel consumption, low cost of replacement parts and extended service intervals meaning overall low operation costs of the engines. Engine shipments to dealers will begin in July for the 3034 and September for the 3054 models.

The 3034, 3054 and 3054B engines feature a high-tech rotary fuel injection pump and low inertia injection system that use less engine energy to move fuel to the injectors. The state-of-the-art combustion chamber design provides the correct fuel/air mix for combustion efficiency, power and torque, and low fuel consumption and emissions. The combustion systems' relatively low peak pressure reduces mechanical stress within the engine to improve reliability and prolong engine life.

The recommended oil and filter change interval is 250 hours for the 3054. but engines in 'E' applications and some 'D' applications where load factors are less than 30 percent may be capable of an extended interval of up to 500 hours. Similar to larger Cat engines, both seawater and freshwater pumps are gear driven on the 3054 and 3054B. The 3034 is available with a gear-driven seawater pump and belt-driven jacket water pumps. On heat exchanger cooled engines, the heat exchanger is equipped with long-life cupro nickel tubes and replaceable end caps for easy service. 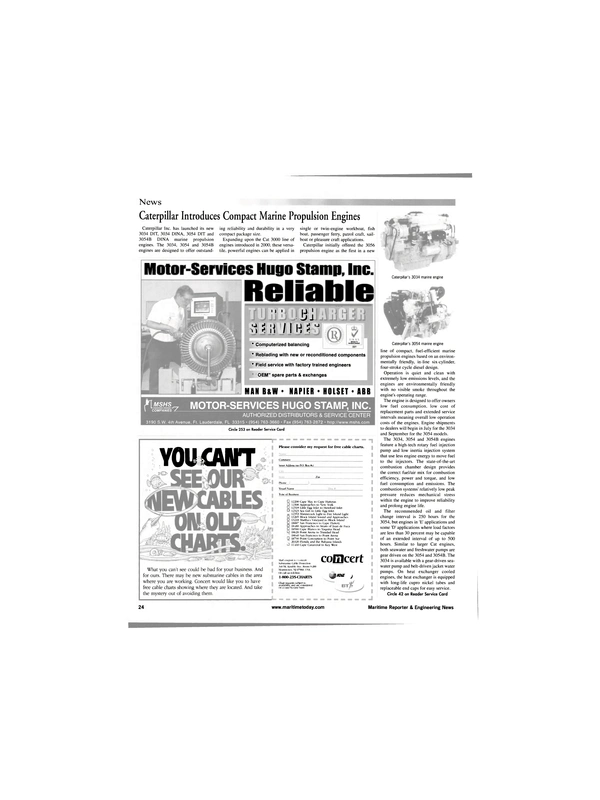