Vosper Thornycroft (VT) has once again, completed a successful shipbuilding project for the Royal Navy with the launch of the last minehunter in the Sandown Class at its Southampton shipyard.

HMS Shoreham, which was sponsored by Lady Perowne, wife of Admiral Sir James Perowne, Deputy Supreme Allied Commander Atlantic, is the 12th of these technologically-driven fiber reinforced plastic minehunters, all of which were built by VT.

Circle 233 on Reader Service Card VT. which collaborated closely with the Ministry of Defence in the design of this third generation FRP minehunter, was able to design the RN class via sophisticated computer aided design techniques.

The construction of HMS Shoreham inaugurated many firsts for the yard, as the vessel was 90 percent complete at its launching and holds the designation as one of the first RN ships to be launched with its gun, a Bofors 30 mm, installed.

Equally impressive has been VT's ability to adapt during the life of the Sandown class program. More than 1,000 modifications have been made in the vessels — taking into account changing technology.

Scheduled for delivery later this year, HMS Shoreham measures 172 ft. (52.5 m) and has a displacement of 470 tons.

Able to cruise at a maximum speed of 14 knots, the vessel's propulsion system is comprised of two Paxman Valenta engines and two Voith-Schneider propulsors. 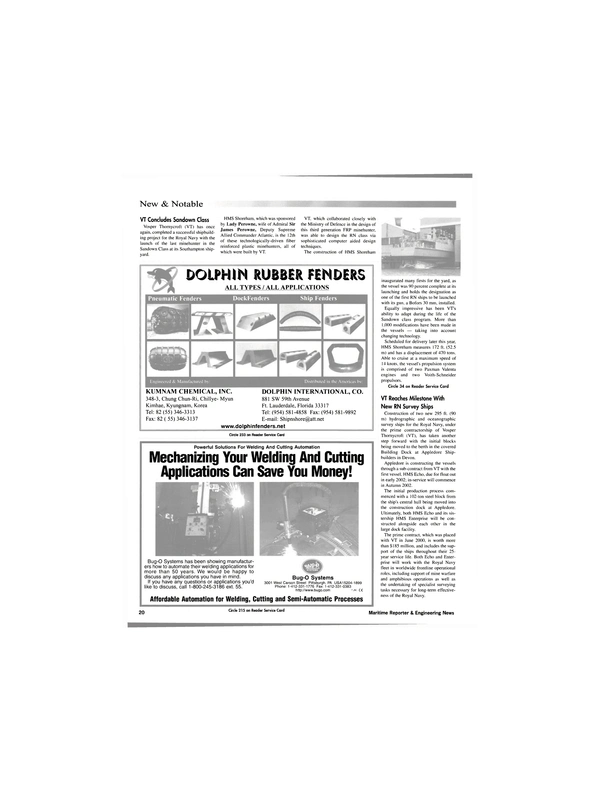