Derecktor signed a contract with the Sandy Hook Pilots Association for the supply of the third of a series of new pilot boats as part of the fleet modernization effort of one of the busiest Pilots Associations in the country. Scheduled for delivery in fall 2001, these 53-ft.

(16.1-m) boats are all-aluminum construction on a design by Camarc Small Craft Designs. Powered by two Detroit 8V2000, the vessels are capable of top speeds of 25 knots.

Derecktor also signed with the State of Delaware Department of Fish & Wildlife for the construction of a new Fisheries Research Vessel that will replace their current boat, a 100-year-old converted wooden sailboat. The new 62-ft. (18.8 m) vessel designed by Nigel Gee Associates, will be built by Derecktor in aluminum with a hard chine hull. Behind the pilot house with aft-raked windows, the ample aft deck will be fitted with swinging A-Frame and cargo boom, net reel, trawl winch and dredge.

The twin Daewoo T180V1M (650 [email protected],100 rpm) engines will be resiliently mounted, driving twin fixed-pitch propellers through ZF gearboxes. Planned uses of the new vessel include study and sampling of the fisheries in the Delaware River and Bay. 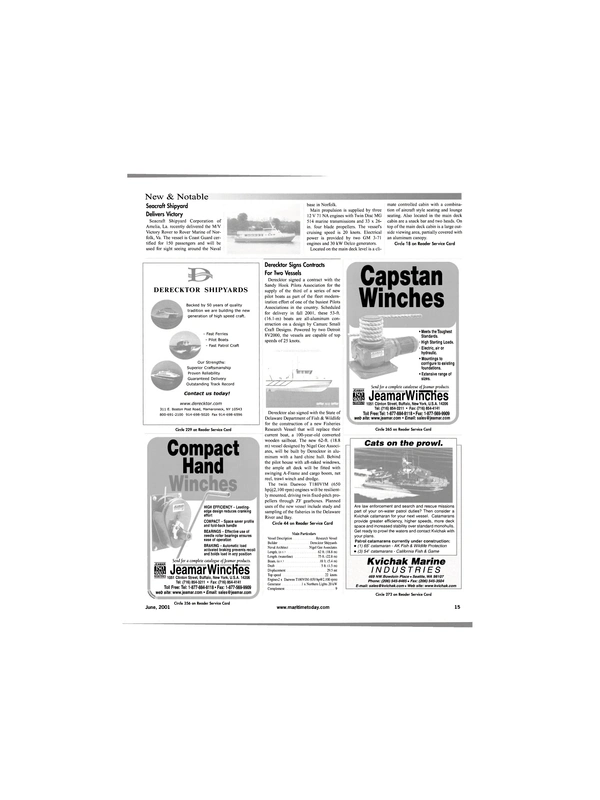