Independent Spanish shipbuilder Hijos de J Barreras has again showed its mettle by delivering two specialized vessels within the space of just a few days, and by landing a three-ship contract to take its orderbook into mid 2003. Three years after being spun-off from the former Astilleros Espanoles (AESA), the Vigo yard demonstrates how a wellmanaged and motivated undertaking can successfully make the transition into private control. It provides a template for broader Spanish endeavors to slim the state's holding in a number of industrial sectors, not only shipbuilding.

Barreras always displayed something of an independent style within AESA (now IZAR), of which it was part for nearly a quarter-century. The disposition of its people, as in all such situations, has been a key factor in ensuring business development outside the stateowned fold. The maintenance of a substantial in-house design resource and the continuous plough-back of profits into the shipyard also give solid expression to the long-term commitment displayed by the yard's owning consortium.

Ensuring competitiveness and viability with a broad range of vessel types and a preponderance of 'one-offs' is a necessary prerequisite of a medium-sized shipbuilding enterprise. If blueprints can be used again for repeats or variants at some stage down the line, then that is a bonus. But the economics of the business hinge on being able to make money from a mixed production base, such that this sector of shipbuilding ranks among the most challenging of all fields of industrial production.

During early May, the Galician yard dispatched a compact pure car carrier (PCC), intended for the buoyant vehicle export trade out of Spain, a prominent and growing European auto manufacturby David Tinsley, technical editor er. The vessel was closely followed down the mountain-fringed Ria de Vigo by the first of a new breed of RoRo passenger (RoPax) ferry for national operator Trasmediterranea. Named Sorolla, the 23.5-knot ferry provides for 1,000 passengers and 1,800 lane-meters of RoRo garaging, and denotes a new phase in the upgrading of the traffic between the Spanish mainland and the Balearic Islands.

As a mark of its business versatility, Barreras has also supplied the detailed design for the second ship of the class, entrusted by Trasmediterranea to IZAR's showcase Puerto Real yard at Cadiz.

Meanwhile, the Vigo orderbook has been augmented with a deal from Lineas Suardiaz for three RoRo vehicle carriers based on the design adopted for 15,300- gt sisters L'Audace and La Surprise, delivered by Barreras to the same owner in 1999 and 2000. Suardiaz has also made a 10-year charter commitment to the Gran Canada Car, the 1,146 carcapacity PCC which preceded Trasmediterranea's Sorolla out of the yard by a couple of days. Gran Canaria Car is owned by Naviera del Odiel, one of the shareholders in Barreras.

Another of the maritime interests with a stake in the yard is Albacora, Spain's biggest operator of deepsea tuna freezer fishing vessels. A company linked to the Albacora group has a refrigerated fish carrier under construction there. The diversity of the Barreras production is further evident in outstanding contracts for a pair of 1,100-TEU containerships, to be operated by Trasatlantica Espanola, plus two 1,500 car-capacity RoRos to be built for the Greek company Neptune Shipping Agencies.

Many of the sleek modern generation of large, deepsea tuna seiner vessels that homeport in Vigo have been turned out by Barreras, although reccnt years have seen the shipbuilder demonstrate equal prowess in the RoRo disciplines.

Visionary Approach to Tanker Trades With the first of Concordia Maritime's revolutionary class of V-Max tanker set to cut a new figure in crude oil trade into the Delaware River, parent Stena Bulk has embarked on plans to adapt the innovative design concept to other sectors of the market. Just as the intrinsic maneuverability and shallow draft of the twin-engined, twin-skeg V-Max has brought a VLCC shipment capability to ports hitherto limited to Suezmax tonnage, the nascent S-Max is intended to deliver Suezmax shipments to ports and terminals currently restricted to Aframax tankers.

Work has been implemented in Gothenburg on the wide-bodied S-Max, which would perpetuate, in the one million- barrel capacity league, the combination of economies of scale, exceptional operational flexibility, enhanced transportation dependability, safety and environmental protection manifested in Concordia Maritime's 313,000-dwt Stena Vision.

The V-Max tankers have been conceived with a clear customer focus. The objective has been reduce oil companies' logistic costs, by offering a 30 percent higher loading capacity on a limited draft relative to more conventional designs of newbuilding VLCC, on an equivalent bunker consumption. Stena Vision is claimed to be the first VLCC to satisfy Det Norske Veritas' requirements for the class notation RPS (redundant propulsion, separate). The premium entailed in a dual main engine installation, with two shaftlines and twin propellers, plus the associated special underwater form, is largely offset by the increased revenue-earning capacity and potential savings in unit transport costs.

Concordia's investment in the pioneering V-Max type was quickly vindicated by Sun Oil Company's three-year charter commitments to the newbuilding pair. As a consequence of the agreement, the twin-skeg Stena Vision, to be joined in July by Stena Victory, will become a regular feature of the traffic to Sun's two refineries near Philadelphia.

However, options on a further six such vessels appended to Concordia's contract with Hyundai Heavy Industries have not been exercised, in the absence of satisfactory agreements with other charterers. The reported 10-12 percent higher price commanded by each of the V-Max duo at the time of contracting, relative to more standard VLCC capacity, is a measure of the premium entailed in conferring such a high margin of safety Although there would currently appear to be few charterers worldwide willing to pay significantly more for quality tonnage designed and engineered to confer very high safety factors, Concordia Maritime's managing director Lars Carlsson believes that the V-Max investment will pay-off in the long-term.

Within the framework of Stena's Wide Body concept, the group's engineers have also developed a 10,000 dwt flexible coastal tanker type with a draft of only 20 ft. (6.1 m).

Optimized to reduce the prospective oil company user's transport costs per barrel, the C-Max type incorporates diesel-electric propulsion and azimuthing thrusters and has provided the blueprint for a newbuild pair in Poland. 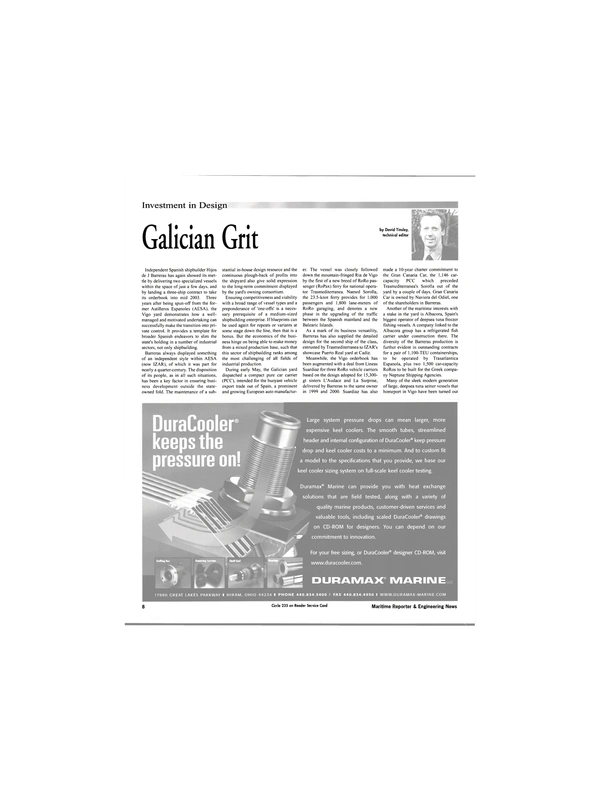