(28-m) Catamarans (type MC 25) from Barcas S.A. in 16 Rio de Janeiro, Brazil. The contract was signed on May 4. and construction of the boats will begin in June 2001, with delivery of the first vessels scheduled for approximately 12 months later.

These vessels, designed and engineered by Rodriquez, are an extension of the CityCat range of catamarans and will serve the city of Rio de Janeiro and its suburbs.

The 148-ft. (45-m) HC 18, built entirely out of aluminum, will connect downtown Rio with the city of Niteroi. a Route of only three nm but carrying approximately 22 million passengers per year. To facilitate the loading and unloading of the passengers, the HC 18 is a double-ended design with a command bridge at either end and will be able to transport 900-seated passengers with more than 300 standing.

The vessel will be powered by four MTU 8V2000 M70 diesels, each connected to a dedicated CP propeller that will provide a service speed of 18 knots.

The 92-ft. (28-m) MC 25, also built entirely out of aluminum, will serve the Rio de Janeiro to Charitas route, which is a slightly longer route of about six nm and is not as busy as the one previously mentioned.

As a result, the vessels are therefore slightly smaller with a capacity of 200 passengers but with a higher service speed of 25 knots. MC 25 is a "traditional" catamaran, i.e. not double-ended, and will be powered by two MTU 12V2000 M70 diesels.

Ettore Morace, sales & marketing manager of Rodriquez, after signing the contract said that "Rodriquez is a worldclass shipyard with the technology and the know-how to be competitive against the leading shipyards from around the globe and can build advanced ships be they catamarans, monohulls or hydrofoils for any function such as military, commercial or pleasure." As part of the ongoing investment at Rodriquez Cantieri Navali SpA, the company is in the midst of a major $43.9 million investment into the Research and Development facilities as well as capital improvements at all the Rodriquez shipyard facilities. Included in this effort is the formation of a new company and shipyard in Rio de Janeiro to be named Rodriquez Cantieri Navali do Brazil.

This new company, a wholly owned subsidiary of Rodriquez Cantieri Navali SpA, will be fully responsible for the construction of the ships for Barcas.

Additionally, this new yard will have the capabilities to build all vessels in the current Rodriquez portfolio and will serve the entire South American continent. 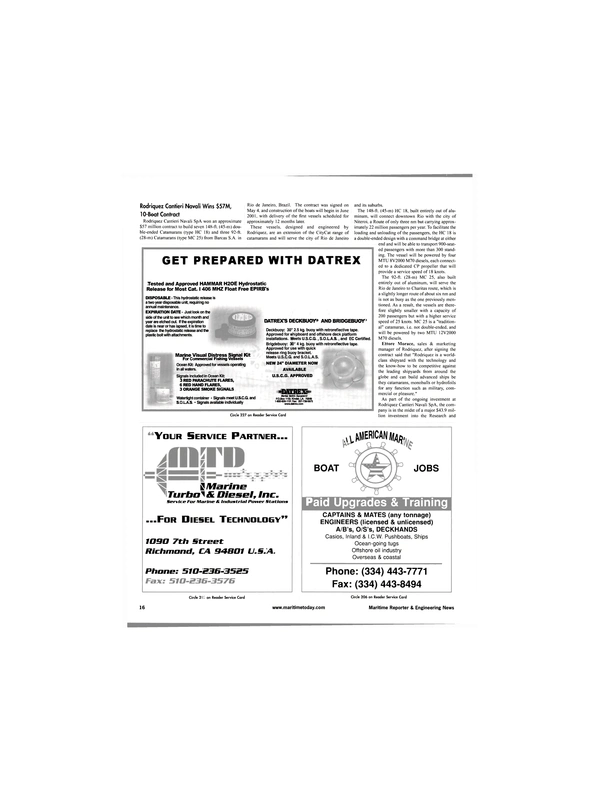