In the process of enhancing homeland and maritime security in the United States, the federal government is substantially increasing the burden on the owners, operators, managers, and agents of foreign ships. The heaviest burden, though, is being felt by the individual crewmember.

INS Policy For a short time after the horrific terrorist attacks of September 11, 2002, Immigration and Naturalization Service (INS) officials in some ports (particularly the Port of New York and New Jersey) would not allow non-U.S. crewmembers to land (come ashore) in the United States. This knee-jerk reaction gradually faded and INS processing of foreign crewmembers slowly returned to nearly the pre-9/11 situation.

In March 2002, an incident in Chesapeake, Va. changed the unofficial INS policy. Four Pakistani crewmembers from the Maltese-flag freighter PROGRESSO sought shore leave. They did not have individual passports and the ship had not obtained a crew list visa.

Despite that, the INS officer attending the ship exercised his discretion and, in accordance with the regulations, granted the shore leave request. The crewmembers promptly deserted, hoping for a better life in the United States. The INS Commissioner reacted by immediately recalling the District Director. This action had the intended effect of prompting all other INS District Directors to tighten the procedures for handling foreign ships and their crews.

The unofficial policy that rapidly but unevenly developed within the INS following the PROGRESSO incident was that no work was to begin on any vessel carrying non-U.S. crewmembers unless prior clearance had been received from the INS boarding inspector. On vessels that the Customs Service was not boarding, the gangway was not to be put down unless the INS inspector was present, unless prior approval has been received from the INS inspector. Finally, no visa waivers would be approved. Medical emergencies or other paroles will be considered only on a case-by-case basis, and then only with the specific approval of an INS supervisor.

Recently, though, even this policy has been tightened. At an increasing number of U.S. ports, the INS is issuing "detain on board" orders, requiring masters to keep on board some or all crewmembers.

Allegedly for national security reasons, the INS is refusing to tell masters, agents, and ship owners, operators, and managers the basis of the "detain on board" orders. In many cases, the U.S.

Coast Guard, at the request of the local INS office, issues Captain of the Port (COTP) orders requiring masters to hire commercial guard services to man the gangway 24-hours a day while the ship is in port to prevent crewmembers from going ashore. Disputes are now arising between ship owners and ship operators over responsibility for this added cost, which can run as high as $3,000 per day of the port call.

Crew List Visas The U.S. Department of State, in a separate initiative, has drafted a proposal to eliminate crew list visas entirely.

This measure, which was submitted on August 6, 2002 for review by the Office of Management and Budget (OMB) and could be placed into effect as early as January 2003, would eliminate U.S.

shore leave for all foreign crewmembers except those fortunate enough to have both a valid passport from their country and a current U.S. visa. Many crewmembers from third world countries lack passports, which traditionally were not required. In addition, it is often difficult for a mariner, who may be sailing for months at a time and who doesn't know future ports of call far in advance, to obtain a U.S. visa. The elimination of the crew list visa will provide a further obstacle to both shore leave and the ability of ship owners, operators, and managers to undertake crew changes while the ship is in a U.S.

Maritime Identification Credentials The U.S. Coast Guard has announced that, starting September 6, 2002, it will only accept certain credentials for the purpose of identifying maritime personnel needing to board or disembark from ships and enter or leave waterfront facilities.

Unofficially, the individual Captains of the Port (COTPs) are given broad discretion to accept additional credentials that they have determined to be trustworthy, but this will naturally vary from port to port.

(NSEERS). The NSEERS Program will be adopted at all U.S. ports of entry (including seaports, airports, and land border crossings) on October 1, 2002.

This program, which is intended to "provide greater protection for the United States and help aliens fulfill their responsibilities under the laws of the United States," will require the fingerprinting of some entering foreign visitors and completion of registration forms. Initially, the requirements will be imposed on all nationals of Iran, Iraq, Libya, Sudan, and Syria and on all other nonimmigrants whom the State Department or the INS determines to present an elevated national security risk.

The NSEERS Program relies on regu- Government Update lations that have been on the books for many years, but these regulations have been suspended for decades, as conceded by the Department of Justice.

National Security Entry-Exit Registration System (NSEERS) On August 12, 2002, Attorney General John Ashcroft announced that on September 11, 2002, the Immigration and Naturalization Service (INS) will commence a pilot program at selected ports of entry called the National Security Entry-Exit Registration System (NSEERS). The NSEERS Program will be adopted at all U.S. ports of entry (including seaports, airports, and land border crossings) on October 1, 2002.

This program, which is intended to "provide greater protection for the United States and help aliens fulfill their responsibilities under the laws of the United States," will require the fingerprinting of some entering foreign visitors and completion of registration forms. Initially, the requirements will be imposed on all nationals of Iran, Iraq, Libya, Sudan, and Syria and on all other nonimmigrants whom the State Department or the INS determines to present an elevated national security risk.

The NSEERS Program relies on regu- lations that have been on the books for many years, but these regulations have been suspended for decades, as conceded by the Department of Justice.

Analysis The new emphasis on ships' crews raises a host of issues.

The INS is now strictly enforcing reg- ulations that have not been adhered to in years. The U.S. Coast Guard is preparing to do likewise. Particularly with regard to the newly-reinvigorated INS policy, the question of due process is germane.

Crewmembers are being branded as threats to U.S. national security, but the individuals affected, the masters, owners, operators, managers, and agents are not being advised of the basis of the allegations.

It is questionable whether INS has the authority to require a master to hire a commercial guard service merely because INS has issued a "detain on board" order with regard to a particular crewmember. The pertinent statute merely requires the master to receive and detain the crewmember. The regulations largely repeat the statutory provision.

The words 'guard' or 'guard service' appear in neither the statute nor the regulations.

This would not be the first time that INS has overstepped its authority. In the mid-1990s, INS was demanding that sea and air carriers pay detention costs (including the cost of guard services) in cases where a stowaway alleged political asylum. Processing of asylum cases can be lengthy and the detention costs can be high. Various sea and air carriers brought separate actions against INS for recovery of monies expended in accordance with the INS orders. The appellate courts held that INS lacked authority to require the carriers to bear the expense of detention.

On the diplomatic level, the question arises with regard to how the United States Government can engage in meaningful negotiations in an international forum to develop a universal standard for mariners' identification cards when it is actively working on the domestic level to implement a unilateral scheme.

Only time will whether the two processes will be compatible.

It is presently unclear how many mariners will be caught up in the NSEERS Program and required to be fingerprinted and complete new documentation.

If the incidence of "detain on board" orders is any indication, though, the number could be quite high.

Conclusion Foreign mariners on foreign ships carry 95 percent of U.S. imports and exports. The U.S. economy would grind to a halt without them and their ships. They have carried U.S. military personnel and U.S. military equipment on a regular basis since at least World War I. While the United States certainly needs to exercise heightened vigilance subsequent to September 11, 2001, the need to "detain on board" large numbers of foreign mariners is less than clear, and certainly has not been explained to those involved or to the public at large. Until and unless a public explanation of the new processes is forthcoming, the U.S. Government will lack moral authority in this regard. 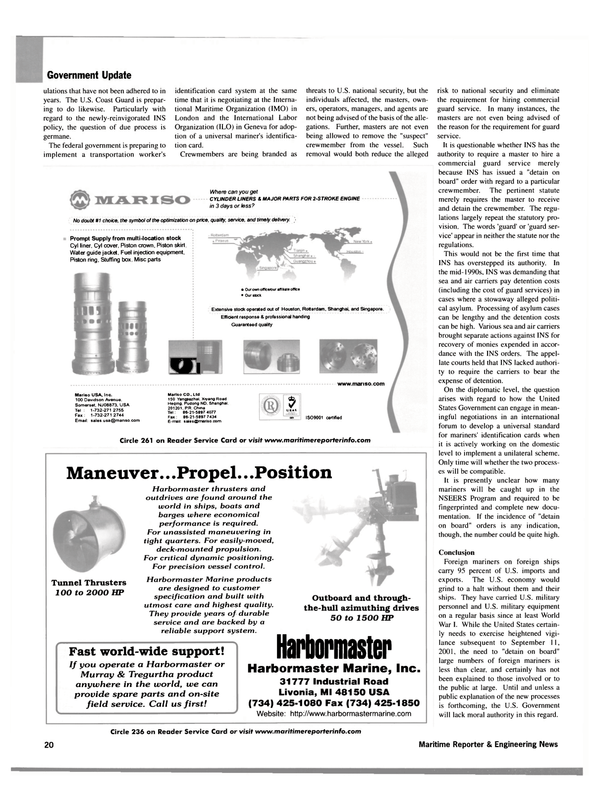