What Hull Shape Is Best?

Back at the dawn of maritime history, a coastal dweller first took a log and ventured out on the water. Over time his craft evolved from a rough log to one that had shape at the ends and was hollowed out. These changes to the basic log shape were the first example of modifying a hull form to increase carrying capacity, improve ride comfort, and to reduce resistance. Since then, shipbuilders, naval architects, and ship owners have experimented with hull shapes and the number of hulls to find the "best" design. Let's look at some of those variations to understand the challenges of choosing a hull shape. — by John Waterhouse Monohull Design The basic monohull can be defined by six key numbers: length, beam, depth of hull at midships, design draft, prismatic coefficient, and displacement.

Length, beam, and draft are familiar to everyone. Depth of hull at midships gives an idea of the freeboard as well as an indication of the hull strength in bending. The prismatic coefficient is a measure of how much shape there is in the ends of a hull. A high prismatic coefficient means that the ends are full such as a tanker bow. A low prismatic means that the ends are fine, with little volume, such as a tugboat stern.

The choice of what dimensions to use depends on the intended use of the vessel. For a passenger vessel, there are considerations of carrying capacity, operating environment, and type of operation.

Clearly, a 400-passenger dinner boat operating on a river will have different characteristics than a 400- passenger overnight car ferry operating in Alaska.

Characteristics the riverboat hull will likely have include: • Shallow Draft — allowing the vessel to operate near river banks at various river levels • Relatively low freeboard — vessel is not subject to the bending forces from ocean waves • Relatively high beam — provides stability since there is little of the vessel down in the water • Moderate displacement — the variable load (people, fuel, provisions) is relatively small • Low prismatic — the hull operates at modest speeds and low horsepower Further refinements of the hull shape have to do with factors such as: type of propulsion, sea conditions the vessel will experience, method of construction, and handling characteristics. Using our example of a riverboat, the after portion of the hull will be shaped differently if the vessel is propelled by a paddlewheel versus propellers in tunnels.

Similarly, for steel construction, the designer must decide whether to choose a molded hull or a hardchine hull. The latter construction method is less expensive, but may require more power to drive at the same speed.

Key Factors in Hull Shape Selection Speed and displacement are key factors in choosing a hull shape. To a waterfront observer, a 600-ft.

(182.8-m) tanker moving at eight knots leaves little or no apparent wake behind it while an 80-ft. (24.3- m) tug operating at the same speed leaves a very noticeable wake. The great naval architect William Froude showed us that the wave-making resistance of a vessel is proportional to the square root of the vessel's waterline length, or: Rw = Speed (waterline length)l/2 The tanker is operating at eight knots divided by the square root of 600 ft., or a so-called speedlength ratio of 0.33, while the tug is operating at a speed-length ratio of 0.89. Relative to its size, the tug is putting more effort into moving through the water.

Another factor in hull design is the displacement.

For speed-length ratios from zero to approximately 1.3, the weight of a vessel, at speed, is supported by buoyancy forces. Operating at a speed above 1.0 times the square root of the waterline length, greater speed typically means a long, slender hull. This is shown in the transatlantic liners of the 1930's such as Normandie, which has an operating speed of 29.5 knots - provided by a hull that was approximately 962 ft. (293.2 m) on the waterline; giving her a speedlength ratio of 0.95. Its ratio of length to beam was 8.7:1 and its displacementlength ratio was 76.7.

Where the weight of the hull is supported by both buoyancy and hydrodynamic forces, as in a planing hull, the hull shape is markedly different. The width of the hull relative to the length increases in order to provide more lifting area to get the hull out of the water.

Typical of monohull planing boats are length to beam ratios of between 5:1 and 4:1. The hulls have significant deadrise in the bow to prevent pounding in waves. The bottom lines aft of amidships tend to be of a relatively constant shape, providing good water flow. The stern is a transom shape to provide a clean separation of the water flow.

Again, the hull shape changes as the operation changes.

Shortly after our coastal dweller modified his basic log shape, his neighbor probably lashed other timbers onto a log and pronounced his invention of a newer, better hull shape: the outrigger canoe. Since that time there have been a large number of vessels built with two or more hulls. Are two hulls better than one? Let's see what our key numbers tell us.

This frictional resistance is proportional to the surface area of the hull. With two hulls, a catamaran has more surface area than a monohull of the same displacement.

Therefore, at low speeds, a catamaran is less efficient than a monohull.

At high speeds the catamaran design divides the weight of the vessel and wave making resistance between two demi-hulls, both of which are relatively narrow for their length. Let's take the example of a 135-ft. (41-m) catamaran with a waterline length of 115 ft. (35.2- m), a speed of 36 knots, and a full load displacement of 170 metric tons (167.3 long tons). Each demi-hull has a speedlength ratio of 3.35 and a displacementlength ratio of 54.4. The beam of the demi-hull is 9 ft. (3 m) giving a length to beam ratio of 11.7:1. Note that the hulls are long and narrow and that the weight is relatively low compared to the size of the vessel. They are also spaced far enough apart that the wave train from one demi-hull does not affect the other demi-hull. The shape of the main deck with a beam of 34 ft. (10.5-m) also gives a good layout for passenger spaces.

Like any other hull type, there are disadvantages to the catamaran configuration.

The narrow shape of the demihulls makes for restricted access to the propulsion machinery.

The hull will be subject to slamming when the height of the seas exceeds the air gap clearance between the cross structure and the design waterline. The fine shape of the bows can cause the bow to plunge into waves rather than rise over them and the stresses induced by two demi-hulls working in a seaway can lead to structural cracking.

Lastly, the performance of the vessel is very sensitive to weight so careful mon- itoring of weight growth is essential.

So, What' s the Perfect Hull Shape?

The answer will be different for different operations. If you are thinking of a new vessel design or about modifying an existing one, I suggest talking to a variety of designers. Each one has their preferences and their areas of expertise.

If someone is trying to convince you that there is a break-through design that is better than anything out there, be cautious.

As we have tried to show above, there is no one hull shape or type that will meet all needs.

Designers have lots of good tools to analyze vessel performance in order to optimize hull shape for seakeeping and resistance. Talk to them and get educated about the options for hull shape and their costs. Size up those logs and pick the one that's best for you. 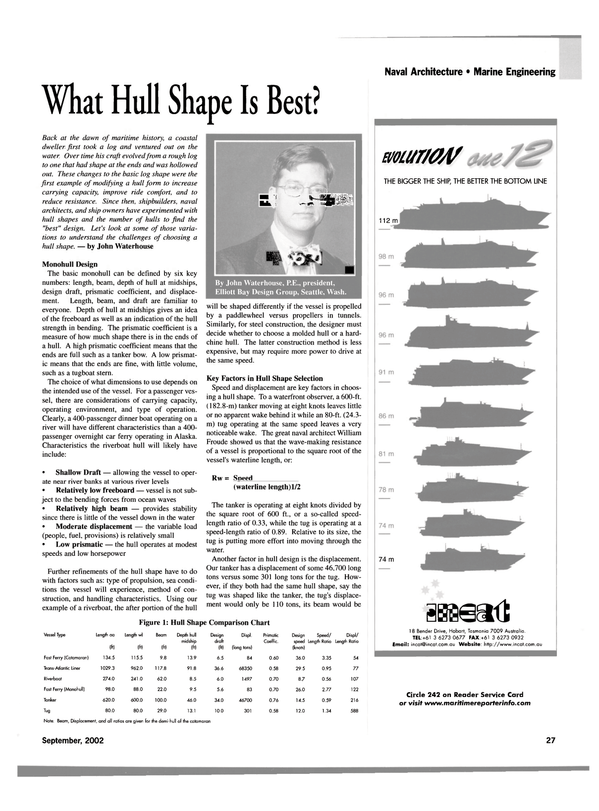 Read What Hull Shape Is Best? in Pdf, Flash or Html5 edition of September 2002 Maritime Reporter