The saga of the now-defunct American Classic Voyages' U.S. Lines has seemingly come to a close with Northrop Grumman Corporation reaching an agreement on August 19 to sell all structures and material associated with the cruise vessel program at the company's Ship Systems sector to Norwegian Cruise Line.

Under the agreement, Norwegian Cruise Line will take possession by Sept. 30, 2002 of the nearly half-complete first ship and all associated equipment and materials, as well as material acquired by Northrop Grumman for a planned seconde ship. Approximately 350 Ship Systems employees are currently preparing the cruise ship f o r launching and towing. These ships were to have been known as the first cruise ships to be constructed in the U.S. in more than 30 years.

The company does not expect the sale to impact previously announced financial guidance. In May, the U.S. Maritime Administration (MarAd) conducted an auction for the cruise ship and associated materials, at which time MarAd subsequently directed Northrop Grumman Ship Systems to proceed unilaterally with the disposition of the vessel.

Malaysian-based Star Cruises Group, which is the parent company of NCL, said that that the vessel will be operated as part of the Norwegian fleet as a 2,000-guest purpose-built ship for Freestyle Cruising. The yet-to-benamed ship will be delivered in spring of 2004 in time for the summer season.

NCL has contracted with Northrop Grumman Ship Systems (NGSS) to buy all of the materials and equipment and the work performed to date on the two Project America vessels under construction at Northrop's Ingalls shipyard in Mississippi, that were to have been part of the now-defunct United States Lines fleet. The substantially completed hull of the first vessel, plus all of the associated equipment and materials, will be transported to Europe, where work will be completed ina yet to be determined shipyard.

"The acquisition of the 'Project America' assets was prompted by the success of Freestyle Cruising, the tremendous reception we have had to Norwegian Sun and Star, and the need to add ships as soon as possible after the delivery of Norwegian Dawn, our last scheduled new build, in December 2002," said Colin Veitch, president and CEO of NCL.

The original design of the "Project America" ship has been modified and will sail under the NCL brand as the latest addition to the company's revolutionary Freestyle Cruising fleet, which allows passengers to enjoy the benefits of no fixed meal times and no assigned seating in a relaxed atmosphere.

Once the completion of the first vessel is under way, NCL will explore the feasibility of completing the second vessel based on the work in progress and materials that have been purchased as part of the deal with NGSS. 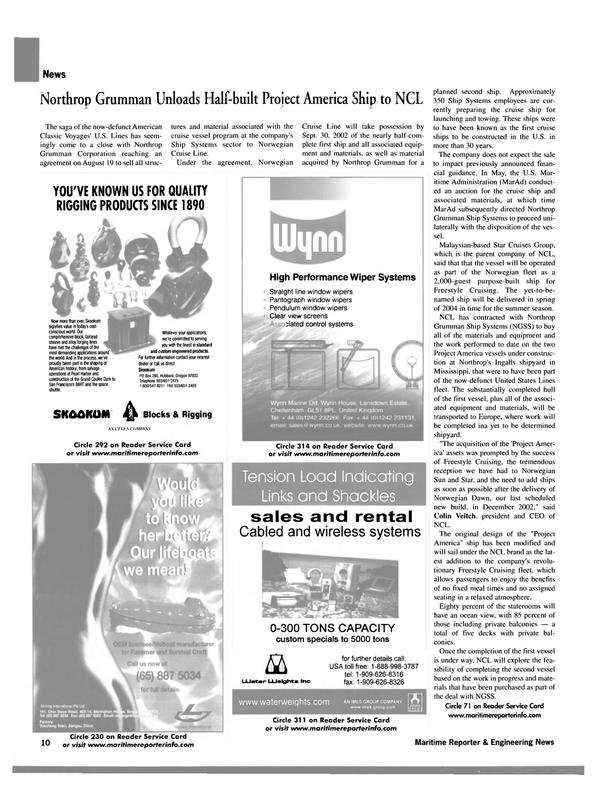