Despite the challenges and risks involved with the operation, the responders have identified 26 tanks and spaces on the wreck containing about 132,000 gallons of heavy fuel oil. To date, about 12,000 gallons of oil have been recovered.

During the assessment, many fuel tanks were found to have badly corroded vent pipes, which allowed oil to slowly leak into the cargo holds. These vents are the primary sources of the pollution that has contaminated shorelines and sea birds over the last few years.

Most of the leaking fuel vents have been sealed, but the process in ongoing.

Operations in the forward cargo holds have been especially challenging. Inaccurate ship drawings and piles of cargo have complicated the search for vents in the holds. The 50-year-old cargo has corroded and fused together, forcing divers to chisel through solid walls of material to tunnel access ways to the vents.

The piles of cargo create safety concerns for the divers due to its instability.

The recovery team has also had to overcome many challenges, including; diving in 175 ft. of water, 45 degree sea temperatures, poor underwater visibility, and strong bottom currents.

With the assessment and vent sealing phase nearly completed, the responders are using various techniques to remove the oil from the tanks. The oil at 50 degrees resembles that of peanut butter in thickness and is very difficult to pump to the surface. Divers are inserting heat exchangers and injecting steam into the oil to raise the oil's temperature enough to pump. The responders are making good progress refining these techniques or developing new, innovative ways to remove as much oil as possible. 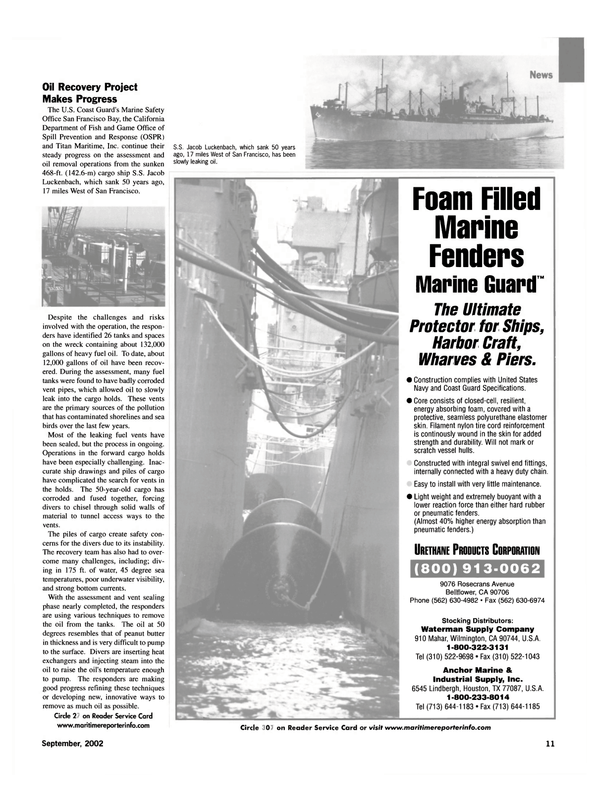