Research to measure offshore workers’ body size with 3D scanners to inform the future design of safety equipment, survival clothing and space requirements on offshore installations has been launched in Aberdeen.
The research, which will generate an ongoing capability for measuring the size and shape of the offshore workforce, is reported to be the first of its kind in more than 25 years and is being led by researchers at Robert Gordon University’s Institute of Health and Welfare Research (IHWR) in collaboration with Oil and Gas U.K. The project’s aim is to design and implement a systematic assessment of 3D measurements on a sample of approximately 600 offshore workers. The data will then be used to inform all aspects of offshore ergonomics and health and safety, from emergency helicopter evacuation and survival suit design to space availability in corridors and work environments. Project leaders Dr. Arthur Stewart, Reader, and deputy director of RGU’s Center for Obesity Research and Epidemiology (CORE), and Dr. Graham Furnace, Medical Advisor for Oil & Gas U.K. conceived the project in 2011.
It includes senior figures from Oil and Gas U.K. – Robert Paterson, Health, Safety and Employment Issues Director and Bob Lauder, Health and Safety Policy Manager – as well as data modeling experts Professor Patrik Holt and Dr. Eyad Elyan from RGU’s Institute for Innovation, Design and Sustainability Research (IDEAS). “The last body size survey of offshore workers was undertaken in the mid 1980s and since then the average weight of the workforce has risen by 19%,” said Dr. Stewart. “As a consequence the size and shape of the offshore workforce has increased to an unknown level.”
“Understanding this change in size and space requirements for the offshore workforce is important as their current workplace is designed for personnel as they were a quarter of a century ago. Knowing the actual size of the workforce, together with size increments imposed by different types of clothing, will enable space-related risk to be managed and future design for space provision optimized.”
KTP Associate Robert Ledingham has been appointed to work on the study and will test and calibrate new portable 3D scanning technology at the University’s Center for Obesity Research and Epidemiology where the first group of volunteers will be scanned before using it to gather more data at Falck Nutec’s offshore training facility in Dyce.
Initial research conducted by the team at RGU has shown that a 90kg man wearing a standard helicopter passenger survival suit increases body volume by 44 liters over that of close fitting clothing. Graham Furnace added, “It is already known that the majority of the U.K. population is overweight, and offshore workers are no different in this respect. The question of ‘big people’ is a major area of medical concern within the industry because of the health risks associated with being overweight, but as the initial scans of the study already confirm, the issues relating to the size and shape of offshore workers also have important safety and equipment design implications.” 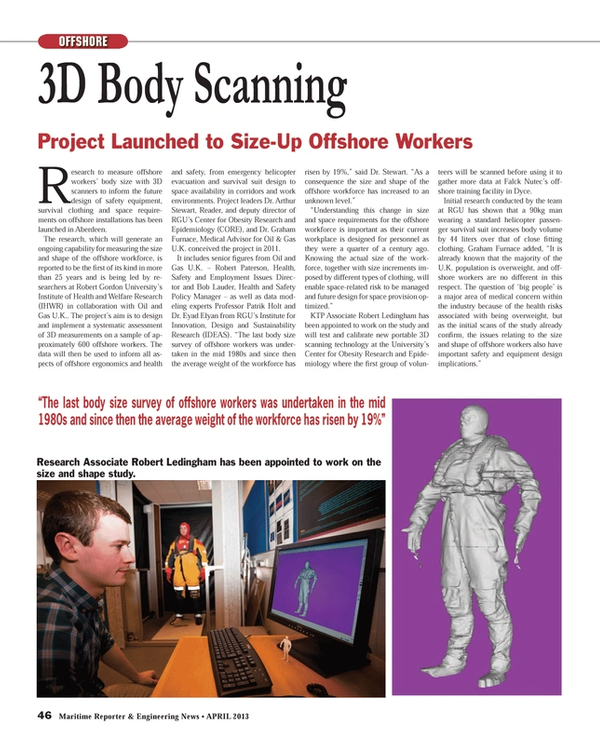