Dead in the Water

The world watched as the Carnival Triumph sat still, dead in the water in the Gulf of Mexico after a main space fire caused a total loss of electrical power.  For the 3,143 passengers and 1,000-plus crewmembers, there was no heat or air conditioning, toilets or sanitation, lights or  ventilation.  Fortunately, despite the seriousness of the fire, which was caused by a leaking fuel line, nobody was hurt.  We waited and watched for several days for tugs to arrive on the scene and begin the slow process of pulling the 893-foot ship to port to let her passengers debark and commence repairs.
Problems on cruise ships have high visibility.  Today many ponder the discomfort of those on board and debate a “cruise passenger bill of rights.”  Engineering problems can affect all ships, so maritime professionals should ponder how a main space fire could eliminate all capability to generate power and the consequences if that should occur.  No single point of failure should cause a ship to lose all power.
According to marine electrical engineer Moni Islam, there are several factors to be addressed to reduce the likelihood of power failures, not just on cruise ships but all types of vessels and offshore platforms.  He is particularly concerned with ships that feature integrated electric propulsion.
“We need to redefine failure mode and effects analysis (FMEA) to better understand the weak links in the electrical system,” says Islam.  “It’s important to monitor and maintain a baseline electrical system configuration so that any deviation is quickly identified and attended in a timely manner by a knowledgeable operator.”
Systems employ “black boxes,” that can monitor or control electrical propulsion processes without any human intervention.  But, Islam says, operators are not trained recognize when the black box has found a problem, or to be able to do anything about it.  “We need to train shipboard engineers better, or make the system smart enough to self-repair the problem.”
This will require an evaluation of the skill-level and amount of training necessary to safely operate integrated electric power systems at sea, i.e., what capability is needed at sea and what can remain on shore, he says.
Black outs are a problem, and ships that go dark, especially with passengers, draw public attention and scrutiny.  To prevent worst-case bolted electric fault-related cascading failures, Islam says new ships should be designed with more and larger emergency generators to carry the vital loads if there is a main propulsion failure.  Retrofitting existing ships with larger generators, or installing additional generating capacity during refit, should be considered.  Islam also recommends mandating uninterrupted power supply systems (UPS) to kick in to provide no-break power between the initiation of a blackout and availability of emergency power.
“We must redefine vital and redundant auxiliaries and their performance requirements,” Islam says.  “We also need to employ smart reconfiguration control system for vital auxiliaries.”
Islam says research is needed to determine the best method to manage medium voltage (MV) system grounding and monitor system-level electrical ground capacitance.
One way to prevent total ship power outages resulting from major fires is to install fire-rated power cables and insulated bus pipe installations for critical applications, he says.
Islam points to fires resulting from variable frequency drive (VFD) units.  “We need to better understand and manage the harmful effect of VFD harmonics.”
Systems by system, the operating characteristics are well understood.  However, there is insufficient information to determine if the integration of these electrical systems is a root cause of the problems being experienced.  Islam’s suggestions are aimed at designers, operators, maintainers and regulators.  “All of these ideas require investigation,” Islam says.  “We need additional research and development efforts to identify affordable, acceptable, practical solutions that take the greatest advantage of installed hardware and software, and of shipboard personnel who are trained appropriately.”

Islam is chairing a committee of industry, government and academic representatives to update IEEE Std 45, the standard for designing and reliably operating and maintaining electrical installations aboard ships.  The updated standard should supply solutions to these operational problems.  He can be reached by phone at 504-333-5004 or by e-mail at moni.islam@ieee.org or mmislam183@gmail.com. 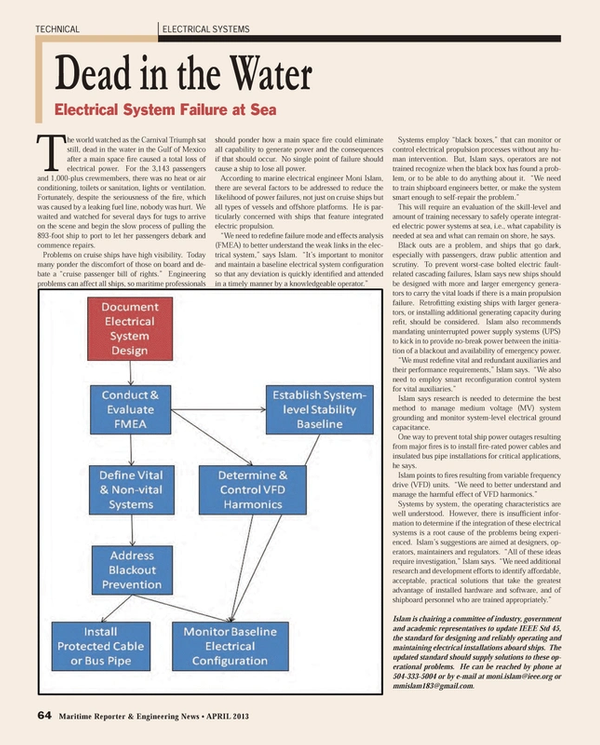 Read Dead in the Water in Pdf, Flash or Html5 edition of April 2013 Maritime Reporter