With the earning of ABS global approval for its safety services and the opening of a Houston Training facility, Wilhelmsen Ships Services (WSS) passed two critical milestone’s in a quest to build and operate an efficient, technically superior maritime and offshore services juggernaut.

More than a decade ago Wilhelmsen Ships Service planted the seeds for what today is growing one of the world’s premier providers of services to the maritime and offshore markets globally. The company celebrated two significant milestones in its quest, with the opening of its state-of-the-art training facility in Houston and the earning of ABS global approval for its safety services – a two-year journey that makes it one of only two companies in the world with this approval (Radio Holland was the first) – and the only service provider within the safety sector. Demand for technical talent is common across the maritime and offshore sectors, with companies of all size and locale vying for a finite pool of top technicians. Simultaneous with the trend to carry smaller crews is the trend toward larger, more technically complex ships, a situation that has created a vacuum of technical specialists at shipping companies at sea and ashore and created a ripe environment for service companies to step in. “It was very clear back in 2000 that the services business would grow significantly,” said Andrew Sheriff, WSS Business Director Safety, during an interview in the new Houston training facility. “So we need to get into the service business, and that’s what we’re doing. But getting into the service business means that you have to train your people.”
Target 2016
The year 2016 is figuratively circled in bold red across the WSS brand, as it is this target date driving the company to up its ante in the training of new technicians to coincide with what is widely believed to be a strong rebound in shipping. Essentially WSS thinks it necessary to be proactive in increasing the general skill base of its technicians to ensure the fuzzy if not noble goal that it provides the industry’s most highly skilled technicians. Simply bolstering the technical talent through a hiring spree was seen as a challenging if not improbable mission, so WSS decided the natural way forward was to develop its own apprentice program further and to promote from this level upwards to fulfill future requirements.
The Houston training facility is the fifth training center worldwide for the company, joining facilities in Shanghai, Singapore, Antwerp and Fujairah. The new WSS Service Technician training program is focused on creating professional technical levels of expertise for WSS technicians in marine safety systems, products and service management systems.
In pure numbers, the company anticipates putting 50 people per year, 10 per world region, through the training system in the build-up to 2016, according to Sheriff. “We’ll lose 30% through people determining that this simply is not for them,” said Sheriff. “They will want something that is land-based and is ‘8to 4’ … this certainly is not an ‘8 to 4’ business; it’s a 24-hour business.”

WSS Today
“I think we all have our fingers crossed now that you’re starting to see some good green shoots coming through in the shipping industry, and based on those green shoots we believe the business will grow. Even Europe is positive for the moment for us,” said Sheriff.
Today, WSS Safety Services boasts more than 40 years of fire and safety experience, conducts 21,000 safety services annually via its network of 98 service offices globally.
The Middle East is one of the areas of strength, and the company’s training facility in Fujairah is a model facility. “Fujairah is a very big port for us from a business perspective,” Sheriff said, “as we have  about 45 engineers working out of there purely for safety service.”
The tanker business is the obvious driver in the Middle East, and while WSS has a traditional strength operating out of the United Arab Emirates, Sheriff said as the shipping business is mobile, so too is WSS.
“We are starting to see that certain other countries within the Gulf are building up nicely, such as Qatar. Qatar Gas is a big customer with about 60 ships, and they want the service work in their home port; so we’ve opened a service station there. The market moves, and we must be agile, particularly with personnel.”
Outside of the Middle East Sheriff said that the focus during the previous five years has been on the ‘BRIC’ countries – Brazil, Russia, India, China – and WSS has moved methodically to add stations and personnel in these regions.
Brazil in particular is a growing force in both maritime and offshore circles, and Sheriff counts Henrique Schlaepfer, WSS’ Area Director, South America, as a source of strength on the continent.
“If you go into a market like Brazil with an ex-pat, it can be very slow (growth),” said Sheriff. Alternately, finding and keeping a quality local such as Schlaepfer – someone who knows how things work and how to get them done – can be instrumental in driving business further faster.
“Brazil today is adapting to the new reality of globalization,” Schlaepfer said. “We want to do business.
To enter Brazil and open a business in Brazil, the real challenge is bureaucracy as it is still very cumbersome.”
Another challenge in the country is the overall quality of its workforce, as he estimates in excess of 20 million have just recently elevated to the middle class. They  are in need of training to build and maintain a uniform high technical level, and this is where the WSS commitment to training comes in. The company invests not only to ensure a high level of technical competence, it invests too, in sponsored English lessons for all employees for example, to ensure that technicians are able to communicate effectively and efficiently with crews arriving from around the world.

Liferaft Exchange Program
Despite a reputation as conservative, the shipping industry is always changing, sometimes radically, often times driven by regulation. Sitting with Sheriff and Schlaepfer afforded a cumulative 44 years of shipping industry experience to tap, and both men concurred that one of the most drastic changes in the shipping industry today, particularly in regards to its effect on the service business, is the ever-shortened time that a ship spends in port.
To put it simply, ships are in port for much less time, said Sheriff.
Schlaepfer agreed, saying today a (container) ship arrives at eight in the morning and departs at four in the afternoon; tankers still take longer, depending on size up to two days. “This is a very short time if you have to service the vessel, whether it is servicing the liferafts or commissioning the fire system,” Schlaepfer said.
“That is why things like the Liferaft Rental Exchange (LRE) has suddenly become a success, where it probably would not have been 15 years ago,” Sheriff said.
The Liferaft Rental Exchange is a program pioneered by WSS, and essentially allows its customers to rent Unitor Liferafts on an annual basis, promising no delays or surprises. As a vessel’s short stay in port allows little time for the annual liferaft service, ship operators often don’t have time to send life-saving appliances back to suppliers’ service centers and wait for them to be inspected and repaired before setting sail.
With the Liferaft Rental Exchange, at the end of the year shipowners simply exchange them for equivalent approved liferafts at a mutually convenient port, the highlight being a fixed annual price and quick turnaround, among others. Today WSS maintains 42 LRE stations supporting more than 1,000 ports.


(As published in the April 2013 edition of Maritime Reporter & Engineering News - www.marinelink.com 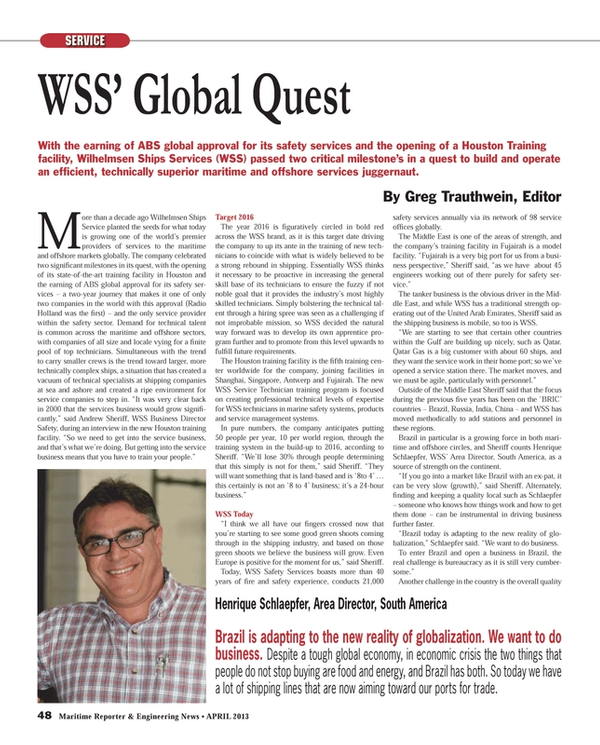