For enhancing the draft in ports or undertaking major dredging projects, India still relies on foreign dredging giants, a situation not likely to change unless the government comes out with a policy encouraging investment in the dredging industry.

European dredging giants continue to make a clean sweep of all major Indian dredging projects, a market condition largely attributed to the lack of an environment conducive to encouraging Indian companies into large scale dredging. In short, there are no parallel “protectionist policies” in place like those that exists in several maritime countries.
Big players in the India dredging market, including Dutch and Belgian dredging companies, particularly VanOord, Royal Boskalis, Jan De Nul and Dredging International, have ruled the Indian dredging market; and if the present trend continues, they could very well remain in charge of the situation for some time to come.
With the increased focus on port infrastructure development, escalating size of vessels calling at the Indian ports and increased attention being paid to coastal shipping and inland water transportation, the dredging boom underway is unprecedented. There are 13 Major Ports (which come under the federal government) and approximately 187 non-major Ports (under the various state governments). Many of these are set on enhancing throughput capacity by taking the dredging route. The 13 federal ports are working at 85% capacity, where 70% is considered to be ideal. Mumbai’s Jawaharlal Nehru Port (JNPT), the largest container port in India, is working at nearly 100% capacity. The total handling capacity of all the ports is 689.83 million tons on March 31, 2012.
The draft at Indian ports, in channels as well as alongside berths has historically been very low and not commensurate with global developments. Comparing the top 20 container ports of the world where the draft exceeds 15 meters, the situation in India is pathetic, to be forthright. Barring some newer ports that have achieved draft of over 14 meters, the minimum draft at most other ports is less than 10 meters. Even JNPT has a draft of only 11 meters at high tide.
The government’s Maritime Agenda 2010-2020 envisages enhancing the draft in all major ports to at least 14 meters and some significant ones to 17 meters. Dredging projects worth more than $4 billion have already been planned for execution by 2020. However, the growing demand has not been complemented by equivalent increases in the Indian dredger fleet. The capacity of the few dredging players in the country is already engaged in ongoing contracts.
Some ports are undertaking dredging projects to maintain adequate draft. Key ongoing dredging projects include the deepening and widening of the Mumbai harbor channel and the JNPT channel Phase One ($ 314.2 million), capital dredging at Ennore Port (Phase Two) ($34 million) deepening of the inner harbor entrance channel and turning circle (Phase Two) ($46.4million) and capital dredging for the Mumbai Port Trust offshore container terminal ($56 million). Further projects worth over $78 million are on the anvil at the ports of Pipavav, Cuddalore, Chennai, Ennore, Visakhapatnam and Mumbai.

Poor Dredging Capacity
“Though there is tremendous potential amongst Indian players, they are unable to invest in dredging equipment in a big way,” said Pavan Sood, Director of IMS Dredging and Infrastructure Pvt Ltd. “Besides, governmental support for the dredging industry is lacking, hence the country’s capacity has remained dismal.”
The dominant local player, the state-owned Dredging Corporation of India (DCI), owns 10 trailer suction hopper dredgers (TSHDs), three cutter suction dredgers (CSDs) and one backhoe dredger. Besides, other key private players put together have about 37 TSHDs and 48 CSD, clearly indicating the urgent need to augment dredging capacity. Seven TSHDs of DCI are more than 20 years old, and two CSDs are more than 35 years old. The state government organization – the Gujarat Maritime Board – owns four grab dredgers and four CSDs. The Maharashtra Maritime Board, the Kerala government and some private ports also own dredgers, but of minimal capacity.
However, foreign dredging companies have come a long way to mark their footprint in the Indian market with their explicit dredging technology and know-how. They have an active presence in the high volume segment involving capital dredging. They have successfully won contracts directly or through Indian subsidiaries and are capable of meeting deeper draught requirement.
According to the 2007 guidelines of the dredging policy, all Indian companies operating Indian flag vessels including DCI have a right of first refusal if their competitive bid is within 10% of the lowest bid, pointed out Devdatta Bose, Group Vertical Head – Ports and Transportation, TATA Consulting Engineers Ltd., who are presently consultants to JNPT in their on-going dredging project for enhancing the draught to 17 meters. He states that the Ministry of Shipping (MOS) reserves the right to assign any dredging contract at any major port to DCI on nomination. In 2010, the MOS prepared a draft dredging policy which is yet to be approved. The ministry has also released a draft model tender document for use in dredging contracts, which needs refinement.
“The Eleventh Five Year Plan (2007-2012), the target for capital dredging and maintenance dredging was set at 675.3 cubic million (cu. m.) and 430 cu. m. respectively,” Bose said. “However, the achievement for capital and maintenance dredging was only 40.29% and 67.82% respectively. The shortfall in capital dredging in the case of major and non-major ports was 68% and 53% respectively. This was due to several factors such as delay or failure in implementing port projects, financial and environmental constraints and poor response from bidders.”

Funding
Currently, major ports finance capital and maintenance dredging from their internal resources. Given the absence or scarcity of reserve funds, ports are trying to resort to alternative funding through the bond market, loans from national and international agencies, GBS, etc. Internationally, port channels are considered national assets, and dredging projects are funded by local municipalities or government and not by ports.
“All ports in the country should be dredged to a minimum of 14m while the hub ports must be dredged to 17 m depth,” said L. Radhakrishnan, Chairman of JNPT. “Because of the inability of our ports to handle larger and huge ships, the country has to lose out $320m annually to foreign ports. With more than $2B required to achieve 17 m draft in the major hub ports alone, we need to think about how to fund this huge requirement.”
A public-private partnership model in dredging where the concession agreement will obligate the concessionaire to create and maintain the required depth for a predetermined period is being envisaged. The concessionaire will develop the project as per the conceptual layout and parameters proposed by the port and incur capital expenditure on capital dredging and recurring expenditure on maintenance dredging.
“Prior to 2012, there was no distinction for dredgers, imported on lease or other than lease,” Bose said. “A flat rate of 9.52% on the depreciated cost of a dredger with applicable duty drawback was imposed. After the 2012 budget, a clear reduction in the gross rate of customs duty of 6.18% and the upfront duty payable have been linked to the duration of stay of the dredger in India – 6.18% of the total lease value (which would be determined by the lease period and market conditions) and 1/120th of 6.18% of the depreciated cost of a dredger per month if imported on other than lease basis.”
“There is no one who can invest in a big way in dredging, whereas the Dutch players have already invested over a period of time,” Mr. Sood contended. He maintained that the dredging boom has been drawing many Indian players into the market. But most of them with the exception of DCI have generally stayed clear of most major dredging projects. They are unable to operate in most of these offshore works which are notoriously vulnerable to wave, wind and tidal forces. On the other hand the giant players having the expertise and heavy assets are better placed to evaluate the risk, able to budget for the incidence of the risks beforehand on a project basis and are able to manage the ground conditions below the seabed prudently.
“Indian companies have to put up with several hurdles,” said Hemanth Meka Rao Director of Meka Group. “For one, the banks don’t give loans easily. Only if the dredging company has a contract in hand do the banks agree to provide loans because this assures a source of income for paying back the loan amount. Again only if the company has the proper dredger for the job to be contracted do they agree to provide the finance - that is for capital dredging it won’t help to have a trailer suction dredger meant for maintenance dredging.”
Most Indian companies are not geared to offer the entire range of dredging services. With a mere two or three dredgers they are left to depend more on chartering for meeting any exigencies - which need not necessarily be a reliable option. With many companies having come on to the scene, it is becoming a common feature to see several bidders turning up to bid for small contracts with the number often exceeding ten.
A dangerous trend has taken shape mostly amongst major ports that are now adding to the risks with the terms of agreement which put contractors at a disadvantage. Devdatta Bose pointed out, “Contractors are expected to somehow budget for the incidence of these risks before-hand on a project basis. At times, the employers are better placed to evaluate this risk, and yet they pass these risks on to the contractors.”
Going forward, there is a need for adequate technical studies and investigations prior to tendering professional projects management consultants, proper structuring or the contract as per FIDIC guidelines, policy innovation in financing capital dredging projects and skilled manpower. Indian dredging companies also need to augment their fleet to meet the growing dredging requirements. 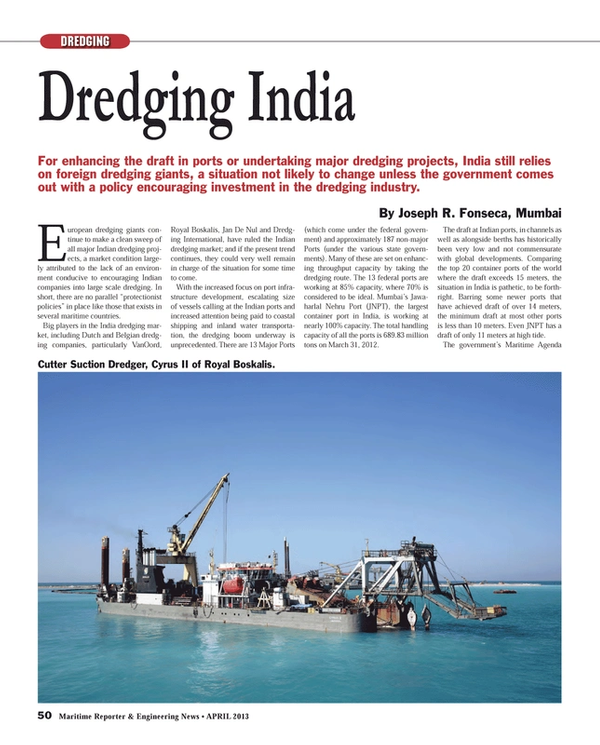