The Glass Half Full

I tend to be a glass half full kind of guy, as even in the worst of times there tends to lie opportunity. I would not be remiss in saying there are more than a handful in the shipping community that could label conditions today “the worst of times” – simply put, as the global economy struggles to regain solid footing some companies find themselves in economic peril. But as history tells, the business world is filled with peaks and valleys, and generally it is the long-term, quality players that not only survive the downturns, but generally emerge even stronger.

In attending a fair share of conferences and technical symposia throughout the year for the better part of 20 years (including the always top notch CMA Shipping exhibition in Stamford last month)  a common lament from the ship owning community is the perception that “regulation” is killing the business. While it is true that there is a seeming endless onslaught of new rules which dictate the manner in which ships are outfitted and operated – ultimately tapping the bottom line – I contend that new regulations are not killing the business, they are simply changing the business, albeit sometimes radically.

“Chapter 11” in a headline is usually not a good sign of a success story, but I encourage you to read Thomas Belknap’s article “Does Chapter 11 Work for Foreign Shipping Companies,” as it documents the trend of foreign companies seeking U.S. bankruptcy protection. Starting on page 18 he discusses some of the ins and outs, ups and downs of the practice.

While shipowners may lament emerging rules and regulations, companies such as Wilhelmsen Ship Service (WSS) embrace them, as new rules create new opportunity. But the path for WSS and companies in its space is hardly the straight and narrow, particularly as WSS continues on its quest to build and maintain a truly global, mobile and efficient safety services network, a mission which received a huge boost last month when WSS earned ABS global approval for its safety services and also opened its fifth global training center in Houston. While WSS is built to help its clients fulfill an increasing array of complex technical rules and equipment, WSS itself invests mightily to build and maintain an equally efficient and effective safety services company across the world’s time zones and across the world’s cultures … no small feat. I was privy to a cadre of WSS executives in an exclusive opportunity in Houston last month, which you can read about starting on page 48.

As this is our Offshore Annual in conjunction with the Offshore Technology Conference in Houston, I would be remiss to not turn the conversation to the offshore industry, for this reason and also because offshore is THE driver of much maritime business these days.
It is no secret in fact, that the offshore energy business has been a major driver of the world economic recovery and to date, around the world, the task to discover and recover oil and gas in deeper, more hostile and challenging environments is growing by leaps and bounds. To put things in perspective I am happy to share with you an exclusive report authored by Jim McCaul of IMA. For those of you not familiar with McCaul’s work in this sector, he is an offshore Floating Production System guru of sorts, producing his insightful Floating Production System Report for more than 15 years. You can read the full story starting on page 32, or for those in need of the full-style 226-page report, you can Email McCaul at imaassoc@msn.com for full details. But there are several key takeaways to share here:

- 40%: IMA forecasts the Floating Production System Sector will grow 40% between 2013 and 2017, a projected need of 124 to 190 additional production floaters in this time-frame.

- 77: The number of production floaters on order, which is an all-time high.

- 55: Brazil is the largest location in terms of floating production systems in operation with 55, including 35 FPSOs, 18 production semis and two FSRUs.

This high-profile, high-value sector of the industry is a decided ‘silver lining’ for many builders and suppliers alike, and a strong cause for optimism going forward. 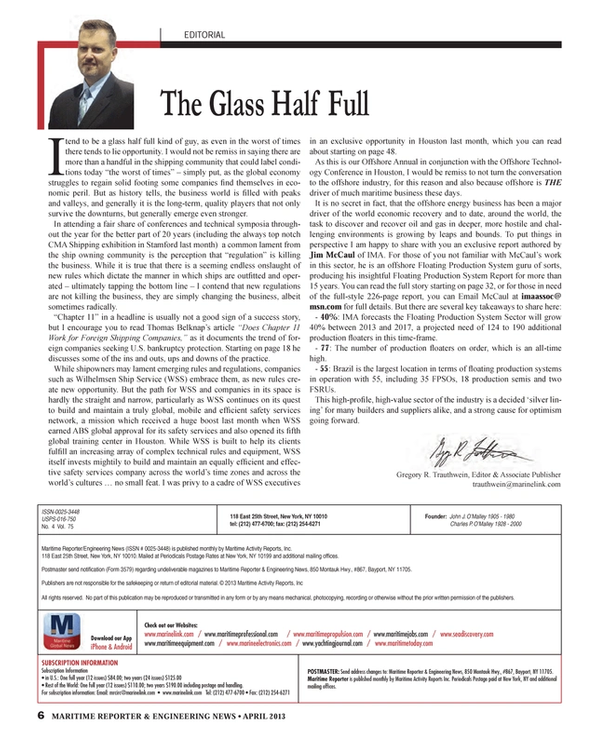 Read The Glass Half Full in Pdf, Flash or Html5 edition of April 2013 Maritime Reporter