A new medical concept for the cruise industry has been officially introduced by Unitor Ships Service in a special presentation held recently in Miami, Fla. The new concept is designed around the medical needs of the cruise ship hospitals, offering Unitor as a one-source, quality supplier of medical equipment and supplies from the newbuilding stage through re-supply and service.

The concept includes Unitor's first medical supply and service center located in one of the busiest cruise ports in the world—Miami.

Harald Meidel, product manager for Unitor's first-aid medical department, said the company initiated the medical concept in close cooperation with many of their customers who were experiencing problems, not only at the newbuilding stage, but also with after-supply and service. Some of these problems included receipt of equipment that proved incompatible, problems with availability of spare parts and maintenance, as well as equipment or supplies that did not meet international standards.

Figures show that between 1981 and 1989, the world cruise fleet tonnage expanded by 31 percent with the number of berths, now about 100,000, representing an increase of 30 percent.

Further, a 12 percent annual growth rate is predicted with the market potential still not tapped to its limit. With so many going to sea, the importance of the ship's hospital cannot be understated. Add to the fact that changes in medical science are taking place daily, with laws regarding ships medicine and generic medications under controversy. Also is the need for educational updates for the ships' nurses and crew who are away from the medical mainstream.

Unitor's medical concept takes into consideration these facts and includes in-service training, insured brand and generic drugs and a team of medical professionals ready to assist when requested.

In addition, product offerings include medical equipment such as X-ray, anesthesia, emergency and biotechnical, including medical gases.

Pharmaceuticals are supplied, as well as a variety of disposable goods such as dressings, needles and syringes. Hospital beds, stretchers and medical cabinets and other hospital furniture can also be ordered. Also available are loaner machines to help cut the cost of weekend repair rates, as well as repair and in-service on equipment.

Unitor reports that response from customers has been very positive. Some cruise vessels already supplied by Unitor's hospital/first-aid equipment include: Sovereign of the Seas, Seward, Royal Viking Sun, Star Princess, and the Nordic Empress. By utilizing Unitor's concept, onshore purchasing departments will have the advantage of dealing with one internationally approved supplier rather than dealing with many local companies, saving them time and money.

For more information and free literature on Unitor's new medical concept for the cruise industry, Circle 23 on Reader Service Card 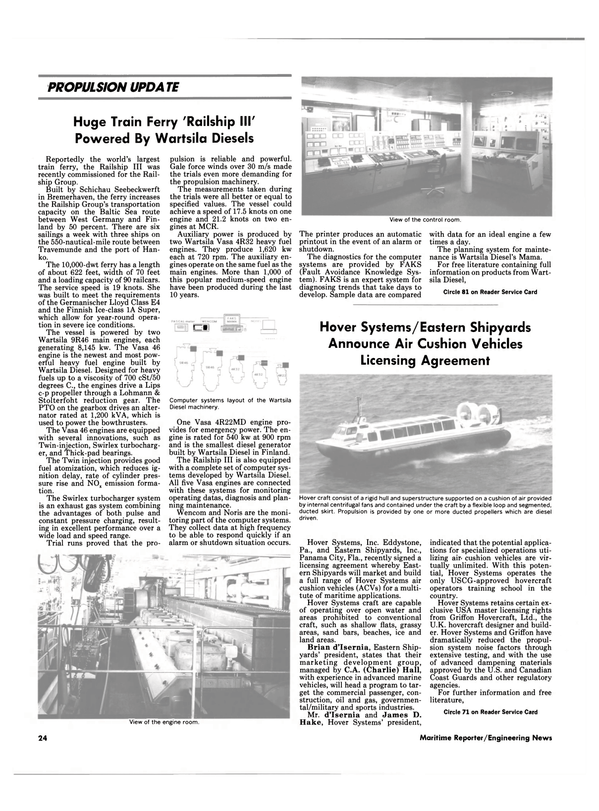