Austal Delivers for Militaries ... Near & Far

While Austal USA based in Mobile, Alabama, still accounts for the lion’s share of revenue (more than 80%) of the Australian based company, the entire corporation has been making waves of late delivering latest technology to naval fleets around the globe.

Austal USA christened USNS Trenton (JHSV 5) at its shipyard in Mobile, Ala. USNS Trenton is the fifth of 10 Joint High Speed Vessels (JHSV) that Austal has under contract with the U.S. Navy as part of an overall 10-ship block-buy contract worth over $1.6 billion. The 338-ft. catamaran was named Trenton by Secretary of the Navy Ray Mabus, after the capital of the state of New Jersey and the site of George Washington’s first military victory during the American Revolutionary War.  Trenton will join the four other JHSVs including USNS Spearhead (JHSV 1) which recently left on her second deployment since she was delivered in 2012.
The ship’s sponsor, Virginia A. Kamsky, is the Chairman and CEO of Kamsky Associates, Inc. (KAI), a strategic advisory firm with offices in Beijing and New York City. Three JHSVs and six Littoral Combat Ships (LCS) are currently under construction in Austal’s Mobile, Alabama shipyard. Austal will launch one ship and send JHSV 5, out on Builder’s Sea Trials in the Gulf before the end of January.

Keels Laid for Oman’s Naval Ships
Austal Australia completed the keel laying for two 72-m High Speed Support Vessels (HSSVs) for the Royal Navy of Oman.  Austal won a $124.9m contract for the design, construction and integrated logistics support of two HSSVs in March 2014, and the vessels are being designed and built at Austal’s Australian Shipyard. Both ships are expected to be delivered in late 2016.

Sixth Cape Class Patrol Boat
Austal launched the sixth in-series Cape Class Patrol Boat (CCPB) at its Australian Defense Facility in Henderson, Western Australia. The launch of Cape Leveque marks the third year in a row a CCPB has been launched in the first week of January; preceded by Cape St George (CCPB01) in 2013 and Cape Byron (CCPB02) in 2014.
Cape Leveque is the sixth of eight 58-m patrol boats that are being delivered to the Australian Customs and Border Protection Service (ACBPS) by Austal as Prime Contractor under a design, build and in-service sustainment contract, valued at approximately $330 million. Austal is also contracted to develop and integrate sophisticated electronic systems for command, control and communication. With the vessel in the water, Austal is on target to achieve full vessel completion and sea trials prior to an official naming ceremony and final delivery to ACBPS in mid 2015. Meanwhile the remaining three Cape Class vessels are at various stages of construction and will be delivered progressively through to end of 2015. Cape Leveque is a state-of-the-art maritime defense capability that will play a significant role in protecting Australia’s borders from multiple maritime threats. It has been designed to have greater range, endurance and flexibility than the current fleet of Customs and Border Protection vessels as well as the Royal Australian Navy Patrol Boat fleet.
The Cape Class Patrol Boats will be designed to undertake 28-day patrols; sail 4,000 nm before having to refuel. 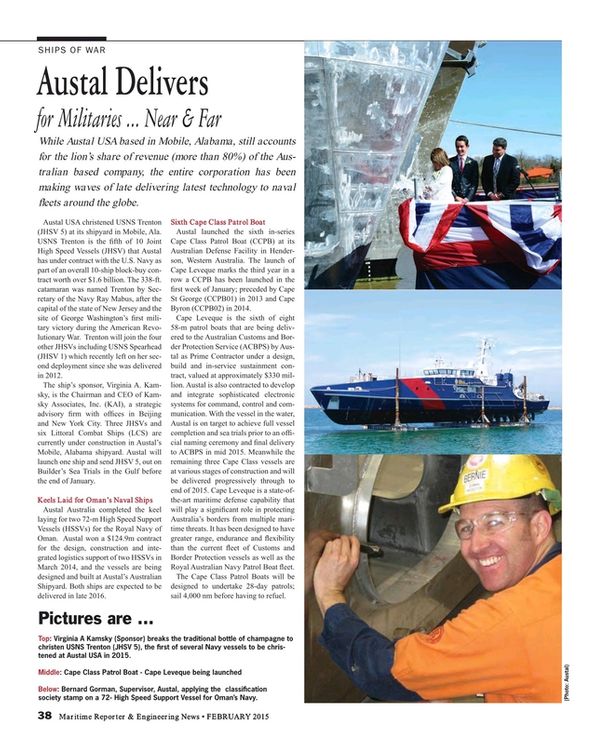