Following a full product trial in New Zealand, the Norwegian Coastal Administration (NCA) signed its acceptance of the first of two ShipArrestor systems from Miko Marine, making Norway the first country with a system that gives it the ability to protect its shores from the danger of drifting oil tankers and from the disastrous pollution that can result when they run aground.
ShipArrestor was put through a complete customer acceptance trial in Tasman Bay, New Zealand using chartered helicopters and vessels. The system consists of a large fabric parachute-style sea anchor that is looped by a helicopter onto a ship drifting without engine power. This is achieved without any involvement of the ship’s crew after which a line terminating with the sea anchor in a container is paid-out upwind by the helicopter. When the container is dropped into the sea it releases the fabric anchor, a recovery line and a buoy that shows its location. The sea anchor cuts the speed of the ship’s drift and consequently increases the time available for a rescue tug to reach the ship and take it in tow before it runs aground and ruptures its tanks.
As designed, when the rescue tug arrives it can lift the buoy on board and use its line to tow the ship to safety. The advanced materials used by the ShipArrestor give it the strength and ability to quickly turn any size of ship, from a trawler to a supertanker, into the wind and halve the speed at which it is drifting. The ShipArrestor was developed by salvage technology specialists Miko Marine, which led a consortium of eight European organizations partly funded by the European Union.
Coppins Sea Anchors Ltd of Motueka, New Zealand joined the team as co-developers of the ShipArrestor in early 2014.
miko.no
kystverket.no 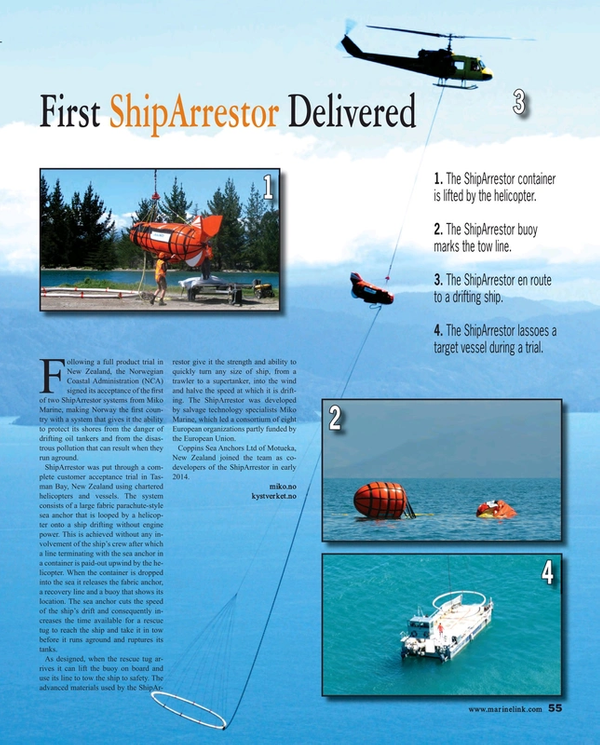