Josh Harris and Casey McManus, a pair of 31-year-olds who respectively own and run the fishing boat Cornelia Marie – made famous on the Discovery Channel’s cable television show Deadliest Catch – discuss with Maritime Reporter & Engineering News their decision to protect the Cornelia Marie with Sherwin-Williams marine coatings.


It goes without saying that commercial fishing boats take a beating, particularly the boats working in the Alaska Bering Sea crab business. The Deadliest Catch tells real-life stories aboard fishing vessels in the Bering Sea during crab fishing season, a cable television show that draws strong ratings for the Discovery Channel, at times drawing more than 3 million viewers according to Variety magazine. Fans of the show likely know very well the story of the fishing boat Cornelia Marie and its colorful crew, led by boat owner Josh Harris and captain Casey McManus. After Harris’ father Phil passed away in 2010 from complications following a stroke, Josh was able to put together the deal to buy the fishing boat and build his own legacy with the vessel his father, he and his brother Jake made famous.
The road has not been short, cheap or easy.
“My dad passed away and left this huge hole in our life, and I started trying to figure out how to get the boat … it costs a lot of money,” said Harris. “Casey’s dad (and Phil Harris’ close friend) made a promise that he would do his best to help maintain us.”
Today Harris is the youngest boat owner, McManus is the youngest captain and the Cornelia Marie is one of the youngest boats fishing the treacherous Bering Sea of Alaska. But just because the boat is relatively new compared to its colleagues it – and particularly its coatings – routinely take a beating from a combination of weather and heavy fishing equipment slamming into it.

Picking Your Paint
According to Harris, in the wake of his father’s death the process to purchase the boat was tough financially given the inflated value of the boat due to the long-running success of Deadliest Catch. To that end, he stressed time  and again the crucial nature of every financial decision.
“Sherwin-Williams has a great product, and for every dollar that we spend on this boat, it has to count,” said Harris. “We are literally pinching pennies to make this happen.”
While Harris continued to stress the importance of every dollar spent, simultaneously he discusses the critical nature of a good paint job to the overall health, welfare and longevity of a Bering Sea fishing vessel. “I’ve seen a lot of different coatings, and for what we have gotten, the Sherwin-Williams product is remarkable. For fishing pots to be able to hit this paint and not simply shatter the paint, it is remarkable.”
But make no mistake, the prospect of starring on one of the longest running, highly ranked cable television shows played no small part in the decision made to give the boat a great paint job. “We needed a paint job, it was going on five years. Being on the most popular show on the planet, rolling in with a rust bucket is not the cool thing. You have to look sharp,” said Harris.
McManus knows the rigors of keeping a fishing boat properly coated, as he has a history and strong ties to the Trident fishing fleet. “We’ve gone through every paint manufacturer that there is, and if you bounce pots off it, other coatings are brittle, they break and it rusts. With the polyurethane that we put on the Cornelia from Sherwin, a pot hits it and it just scuffs. You still get a mark, but the steel is still protected. And that’s what matters to us; in the environment that we fish in, you cannot afford to let your boat get cancerous (with rust).”
The boat, crew and coating were put to the test last year when it fished as Super Typhoon Nuri churned, a massive storm in late 2014 which generated wind speeds to 125 mph and a low pressure of 910 mbar. While the Cornelia Marie didn’t get caught in the heaviest part of the storm, it operated in 40 ft. swells, with a few waves above 50 ft., for more than 12 hours, returning to port and finding that its wave wall had been bent.
“When you’re out in heavy weather, the steel on the boat bends and contorts, and the paint usually hardens to the steel … but this stuff flexes with the steel and it doesn’t just snap off.”
McManus agreed: “I’ve worked with a number of coating and marine applications, and I’ve never seen anything like it. I had worked with Sherwin Williams for more than 10 years with as a port engineer project manager. They come by and drop the paint off themselves, they pull it off the pallets themselves to make sure you got everything you’ve ordered, and they talk to you about mixing and applying the paint. They check the weather, the humidity, and give advice on when to paint the boat. They work with you to ensure everything works right. It’s not just the product, the follow up is incredible, and they want to make sure that it is done to their specs and that it’s performing as you expect.”
Harris concluded: “We work our tails off. We’re not made of millions of dollars. We came from nothing and we’ve created this into something, and we’re so close to an operation that is close to making money. Anything that has to do with that boat, we ask what is the long-term impact. We have to do everything smartly, because if we don’t we will fail.” 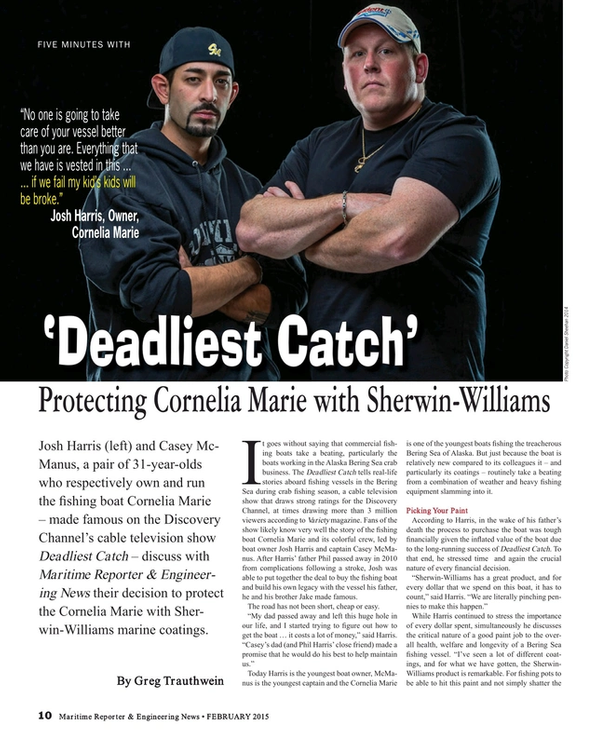