As new emission standards enter force across the commercial maritime sector, Royal Caribbean has opted to outfit 19 of its ships with scrubbers from two manufacturers. This month we visit with Harri Kulovaara, EVP, Maritime, and Kevin Douglas, VP, Technical Projects/Newbuilds, Royal Caribbean Cruises Ltd., to discuss the reasoning behind the decision.

As new emission standards enter force across the commercial maritime sector, Royal Caribbean has opted to outfit 19 of its ships with scrubbers from two manufacturers. This month we visit with Harri Kulovaara, EVP, Maritime, and Kevin Douglas, VP, Technical Projects/Newbuilds, Royal Caribbean Cruises Ltd., to discuss the reasoning behind the decision.
Make no mistake, the prospect of refitting a modern cruise ship with an advanced emissions purification (AEP) systems, more commonly referred to as a ‘scrubber,’ is not an easy or quick decision.
Royal Caribbean Cruises announced in late 2014 that it would opt to install scrubbers on 19 of of cruise ships, finalizing a plan that will be, in the words of Harri Kulovaara, “is one of the most complex technical projects that we have ever started.”
Keeping in mind that Kulovaara is the long-tenured head of RCCL’s new construction program adds perspective to that simple sentence. As most everyone knows, cruise ships have evolved mightily since the industry was born in the early 1970s, and there is little to no space wasted aboard a modern cruise ship, which is literally packed with entertaining amenities and revenue generating spaces. Thus when Kulovarra says that to accomodate the AEP systems – which roughly are the size of a school bus and add substantial weight to the ship – that his team must carve out the space and move equipment, all the while doing as much work as possible while the ship is in service and producing revenue, the complexity of the job starts to take shape.
“Just the amount of water that we need for the system, for example, is enormous,” Kulovaara said. “We need to build new water inlets.”
While the engineered solution is monumental, the company figured it was a better option than switching to a higher grade of fuel, as the AEP system ensures that the company’s ships can travel where they want, when they want, not restricted to high grade fuel availability
RCL contracted two different AEP technology suppliers, Alfa Laval and Wärtsilä, as well as companies to execute the installations, which will start this year and conclude in 2017.
“There is no question that the overall managment must focus on the complexity in relationship (of the new scrubber) to the whole ship,” said Kevin Douglas, VP, Technical Projects and Newbuilds. “Our mantra is ‘we want to get it right the first time.’ So we go through all of the processes that say ‘does the tech work, can we install it, can we operate it?”
The refit of the system, which will take approximately eight months per ship, is magnified by the fact that there are several different size and style of ships, operating in various parts of the world, not always in proximity to a shipyard.
“It makes financial sense to develop and install these systems,” said Douglas, stressing that “We are not losing cabins, which was a key criteria.”
Each ship presents a unique engineering conundrum, as the newer, bigger ships have much more weight and stability, offering a wider choice of placement for the AEP systems including higher up in the ship.
Older, smaller ships present more of a challenge, which Roya Caribbean is confident will be managable.
Kulovaara and Douglas stressed that while the challenge to install the scrubbers is great, it can rely on its well-established and long-tenured connections in the cruise shipping fraternity to lean on for assistance.
As the focus on emissions continues, Kulovaara said that overall energy efficiency of the fleet and its carbon footprint will continue to be driving forces in the ultimate design and outfit of its ships.
“We would love to build all of our ships to be fueled by Liquified Natural Gas (LNG). That would be a very good technical solution. The problem is we don’t have the gas available in the areas where we are sailing.” 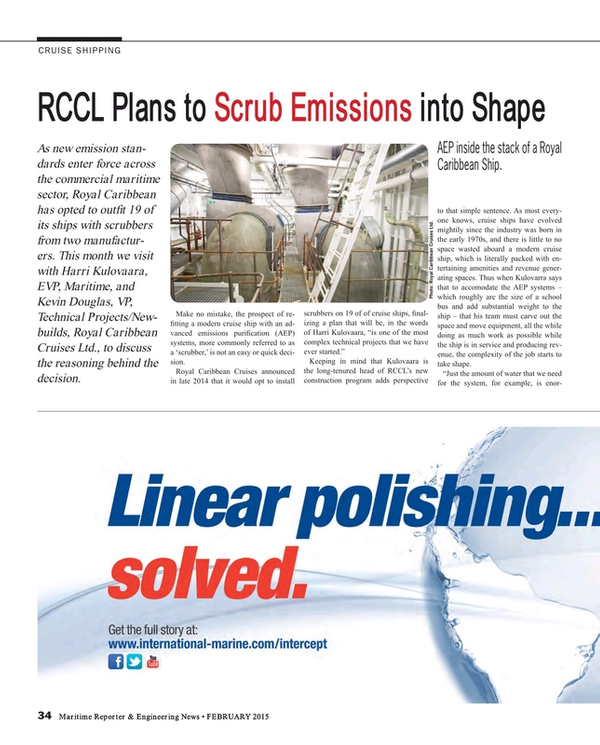