Beyond Your Control: Minimizing Exposure

In the marine industry, the management of risk is an everyday concern. We attempt to minimize risk by maintaining seaworthy vessels, properly training crews, entering into agreements that allocate risk and buying insurance. Despite those best efforts and intentions, events may occur that are beyond our control; events that could possibly cause damage that we may be responsible for. These events are often referred to as Acts of God. These events are important for two reasons: One, when these events occur, they often trigger contractual provisions pertaining to such situations. And, secondly, when damage is caused by your vessel or equipment during the event, vessel owners can, in certain situations, assert an Act of God defense to avoid liability for such damage.
Some advance planning and an analysis of your hurricane procedures could protect you from future liability.

Act of God Defined
An Act of God is defined as an accident that is caused directly and exclusively by natural causes without human intervention, and one which could not reasonably have been expected or prevented. Federal Courts have expanded upon this definition and defined an Act of God as “a disturbance ... of such unanticipated force and severity as would fairly preclude charging a [defendant] with responsibility for damage occasioned by [the defendant’s] failure to guard against it in the protection of property committed to its custody.” The Courts have expanded this concept by including similar likeminded defenses such as “force majeure” and “peril of the sea” to the mix. A “peril of the sea” is said to occur when conditions “are of an extraordinary nature or arise from irresistible force or overwhelming power, and which cannot be guarded against by the ordinary exertions of human skill and prudence.”
Courts have also expanded upon the no-fault concept and used the term “inevitable accident” to describe certain accidents, whether or not caused by an Act of God, in which all reasonable precautions had been taken and the accident occurred anyway. An inevitable accident, unlike an Act of God, can start with human action just as readily as it can originate with a natural force.

Burden of Proof
The burden of proving an Act of God defense rests on the party asserting it and includes the added burden of establishing a lack of fault in order to be exonerated from liability for damage caused to another’s property. Thus, if your vessel causes damage due to an Act of God, you have a duty to prove that the event caused the damage and that you are free from fault in preventing the damage from occurring. Essentially, you must prove that the force of the storm, or other natural event, was truly overpowering and that all reasonable precautions had been taken.
Vessel owners have been attempting to use Act of God as a defense for a long time. As one court explained: “[T]he federal courts’ “weathered” experience with [the Act of God] defense has produced one crucial principle: if a defendant has sufficient warning and reasonable means to take proper action to guard against, prevent, or mitigate the dangers posed by the hurricane but fails to do so, then the defendant is responsible for the loss; however, if there were insufficient warnings or insufficient means available to the defendant to protect the cargo from the Act of God, then they are not responsible for the loss.”
The original cases simply required that a vessel owner have taken reasonable precautions under the circumstances to avail itself of the defense. However, in practice, courts often require that the vessel owner affirmatively prove that the vessel owner did everything in its power to avoid the casualty.   Essentially, the courts have found that a casualty cannot be considered an Act of God if it results from or is contributed to by a vessel owner’s negligence.
When damage occurs due to a natural event, the first question to be answered is whether the event is an Act of God. We can use weather as an example because it is a natural event that seriously impacts our industry. Storms that are usual for the region and the time of year are not Acts of God. For example, high winds or waves in the Gulf of Mexico during the months of January or February or violent summer thunderstorms are normal and would not be considered an Act of God because they are reasonably expected. On the other hand, although they can be expected, courts generally consider hurricanes to be an Act of God because a hurricane causes unexpected and unforeseeable devastation with unprecedented wind velocity, tidal rise, and upriver tidal surge. Additionally, forecasting the tracks, speeds and tidal surges of a hurricane are one of the most challenging and difficult tasks encountered by meteorologists, and despite aircraft, land, and shipboard reconnaissance, weather satellites, and other data sources, exact hurricane paths and associated flooding are rarely predicted with precision. As such, even though we can reasonably expect hurricanes, they are usually considered an Act of God that provides some insulation from liability.
Once it is determined that damage originated with an Act of God, the next step is to determine if the vessel owner took reasonable precautions to prevent the damage from occurring. Determining liability for a loss resulting from an Act of God is highly fact-specific and determined on a case-by-case basis.  In a nutshell, you must prove that you took all reasonable precautions to prevent the harm.

Reasonable Precautions
Using a hurricane as an example, if you chose to moor your vessel in a port that was within the path of a hurricane and it breaks free of her moorings and causes damage, you could be found liable for the damage because there was a reasonable precaution that could have been taken to prevent the damage. You could have (perhaps) easily moved the vessel further inland or selected a port that was out of harm’s way. As such, courts would not allow you to use the Act of God defense because your hurricane precautions were not reasonable.
Although this is a simple example, these determinations are usually much more complex. We recently litigated a case that involved an Act of God defense where the factual evaluation of the reasonable precaution test centered upon the selection of the lay angle for a drilling rig’s mooring lines. Essentially, the claimants argued that we should not have used this rig in the Gulf of Mexico during hurricane season because of the potential for bolster contact when the lines were set at pre-hurricane tensions.
Thus, it is important when evaluating your pre-hurricane procedures to make sure that you look at your plan in great detail and that you are taking all reasonable precautions considering the size and scope of a potential hurricane. Unfortunately, what may seem reasonable to you as a storm approaches may not seem reasonable in hindsight when tested by a claimant that suffered damage as a result of your vessel.
Although evaluating the potential ability to use an Act of God defense long before a natural disaster occurs may seem like a waste of resources, it may reap you and your company significant rewards if and when such an event occurs. Like so many elements in the marine business, a little time spent on the front end can save you quite a bit of time and resources later. 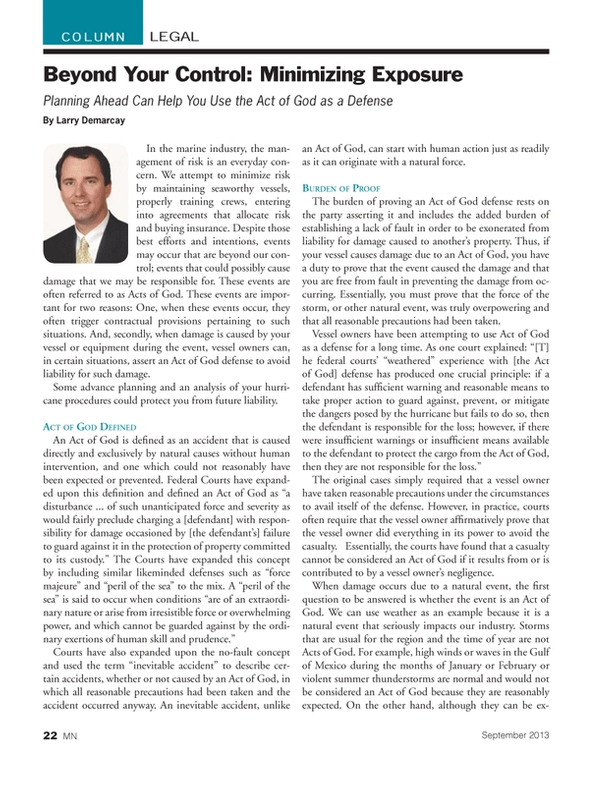 Read Beyond Your Control: Minimizing Exposure in Pdf, Flash or Html5 edition of September 2013 Marine News