Where is Government Transparency?

President Obama pledged in his first four years of office to have a more transparent government. He issued a memorandum on transparency and open government on his second day in office directing agencies to make information more available to the public in a timely manner. Sadly, the Administration has failed to achieve this goal and its decision making processes have become more opaque. The public has a right to know how the Administration develops its policies and this can only occur if the Administration is open and transparent.
Transparency is most lacking in the Federal Advisory Committee Act committees. The government spent almost $3.5 billion over the past 10 years on these groups which were established to provide objective and publicly accessible advice to Executive branch agencies. One such committee is the Shipping Coordinating Committee (SCC) led by the State Department and U.S. Coast Guard. The group provides advice on international maritime and environmental matters but determining membership is like finding a needle in a haystack. The committee membership is not posted on the Coast Guard or State Department websites so it is unclear on who is advising the government. The only readily accessible information is that the committee charter was renewed in February 2013.
In addition to not knowing who is on the SCC, it is also difficult to research past meetings because transcripts and audio recordings are not posted on the Coast Guard or State Department websites. The only way to gain information is to have attended these meetings or go to Coast Guard headquarters in Washington to listen to the audio recordings in person. The Coast Guard was recently asked transcribe the meetings and post the notes on its website but declined to do so because of lack of funding. Similarly, the Coast Guard also denied a request to post public comments related to the SCC meetings on its website. Absent in-person attendance, the average American doesn’t know how the SCC developed its guidance and whether or not the public agrees with it.
Public participation at the SCC meetings is actively discouraged. During a recent meeting, government representatives – sitting on the dais ostensibly to listen to public comments – talked with one another instead of paying attention to those critiquing the SCC guidance. The State Department representative who was supposed to be providing a briefing on an environmental matter told public attendees that she didn’t want to bore them so she skipped over the relevant details. After her cursory briefing, she told public attendees that they could talk with her at a later date. The purpose of the SCC meeting is to share information with everyone at the same time – it is not to omit details, especially when the Administration is not forthcoming about posting meeting notes. The problem is further compounded by the Administration’s haphazard approach in retaining the public comments that are provided at the SCC meeting. The Coast Guard and State Department did not ask public participants at the meeting to provide them with written copies of their statements. If the Coast Guard does not collect written statements and does not transcribe the meeting events, then why is it asking for public participation? People spend a lot of money to attend these meetings and provide their comments; this money could be better spent elsewhere if the government isn’t going to accept and retain them.  Ignoring the public’s comments allows the Coast Guard and State Department to take positions that are counter to U.S. business interests. In the recent public meeting, comments were given questioning the government’s position on the Hong Kong International Convention for the Safe and Environmentally Sound Recycling of Ships. U.S. ship recyclers oppose this convention because it contains standards that are inconsistent with current U.S. law. Foreign recyclers under this convention are held to a lesser standard than their U.S. counterparts. Despite this inconsistency and vocal opposition from U.S. ship recyclers, the government is leading efforts to develop international implementation policies. These efforts are occurring without a clear explanation from the government on why it is has taken a leadership role and how the convention will impact U.S. businesses.
The Obama Administration must reexamine its transparency policies. Billions of dollars have been spent funding FACA committees. Surely, some of this money could be spent transcribing meetings so that individuals outside of Washington, DC will know who has provided advice to the government and how it was developed. The public and U.S. businesses want to know that the government is looking out for their interests and that they are part of the team – not a nuisance placed in a back corner to be forgotten.


(As published in the September 2013 edition of Marine News - www.marinelink.com) 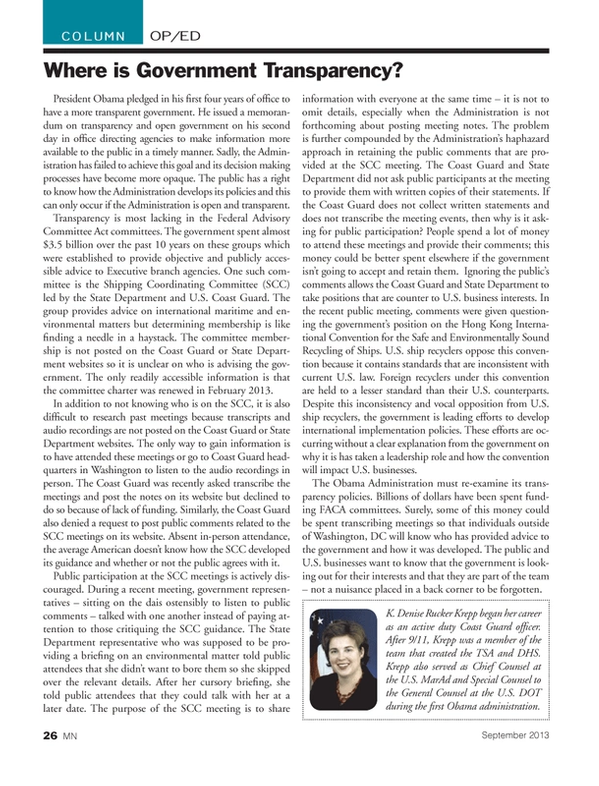 Read Where is Government Transparency? in Pdf, Flash or Html5 edition of September 2013 Marine News