A tumultuous three years for the U.S. Gulf of Mexico, starting with the disastrous Macondo Oil Spill in April of 2010, has come full circle, arriving at a buoyant period for Gulf Cost boat builders, oil & gas developers and the maritime professionals who make it all happen. At the center of all of it is the Offshore Marine Service Association (OMSA) and its President and CEO, Jim Adams.
OMSA bills itself as the leading national association of, and spokesman for, the offshore marine transportation service industry. As a central tenet of its existence, OMSA vigorously defends the cabotage laws of the United States and encourages and promotes high standards of safety training and environmental protection. Listen in as Adams weighs in on the past, present and what’s in store for the most vibrant, and arguably the most important sector for domestic maritime interests today.

Current Conditions – Unlimited Opportunity
According to Jim Adams, one of the greatest challenges facing industry today is to match the growing crewing requirements with a qualified workforce. He explains, “To meet the realities of an aging mariner population and the introduction of a new fleet of larger more capable ships, many of our companies are engaged in comprehensive mariner training programs.  Smart companies are applying the resources necessary to build a new workforce from the ground up.” Beyond this, he says that the word needs to get out to every region of the United States that abundant opportunities exist right now in the U.S. maritime industry on the Gulf Coast. And, he adds, “Mariners working in the Gulf energy sector can live anywhere in country, earn very attractive compensation packages and enjoy a unique amount of time off when not working at sea. Many of the OMSA members are actively recruiting for qualified, credentialed mariners for staffing their current vessels.”
Adams next points to the immediate benefit of a nation striving to become energy independent. Quite simply, exploration and development create jobs. “Whether its Bakken crude in North Dakota or the offshore service vessel fleet based in Port Fourchon, it’s clear that domestic energy activity provides full employment for those willing to work. Looking back to the enormity of the 2010 moratorium, when the entire industry was idled, the challenge of workforce development is put into perspective.”
The offshore service vessel industry is characterized by constant change and technological innovation.  No other sector of the maritime industry recapitalizes its fleet and adopts advanced technology at a pace close to that which we have seen in today’s offshore service market. Jim Adams says that there is a perfectly good reason for all of that. “Over eighty years ago, when our industry’s pioneers converted their shrimp boats and small tugs to serve near shore platforms in the marshes of South Louisiana, they almost immediately recognized that a customized and innovative boat could do a better, safer job.  From that realization, the OSV was born and some of the descendants of those pioneers lead OMSA today.”

Expanding Fleets – and Reasons Why
The American maritime market is an extremely competitive environment and our offshore maritime companies are investing in the future. There is no other sector of the global maritime industry where customer requirements drive reinvestment and innovation at the pace we see in our own backyard.  The demand for domestic offshore energy is driving investment in new ships, constructed in U.S. shipyards around the country, employing tens of thousands of Americans.
Jim Adams explains, “Our industry’s fleet of new U.S. flag offshore service vessels is truly remarkable.  They are remarkable for their size, power, precision and application of advanced technologies. Many of the new U.S. vessels are maximizing their competitive advantage by delivering and installing the merchandize needed for deepwater development. In today’s environment, energy companies embrace an absolute commitment to safe operations and strict regulatory and tax compliance. It is simply good business to maximize compliance and minimize risk by utilizing U.S. vessels that can reliably deliver and install deepwater infrastructure.”

Defining the Jones Act in the GoM
Adams distills the Jones Act discussion down to some key metrics, but also brings up some new and interesting language.
“First let’s look at why its sound public policy to promote our domestic maritime industry. From the founding of our nation, the United States Congress has recognized that ensuring our national security requires a vibrant, competitive domestic maritime industry.  Without active commercial shipyards and a robust fleet of U.S. flag vessels employing professional mariners, our country simply could not mobilize our defenses in times of national crisis.  The Jones Act serves as a national insurance policy for wartime preparedness.”
Adams continues, “We also should recognize that the U.S maritime industry supports over 500,000 jobs nationally.  By utilizing vessels built in American shipyards, and operated and owned by U.S. citizens, we leverage the opportunity of maritime transportation to benefit businesses and employees in every state in the Union.”
Along the way, Adams and OMSA advance an unusual but effective boost for the TWIC concept and what it does for industry and security: “We should know who is operating in our domestic waters and have confidence that they operate using high standards of safety, security and environmental protection. The U.S. Coast Guard has complete jurisdiction over U.S. flag vessels. That’s not true of foreign vessels. Because of their concern for promoting national security in domestic maritime markets, Congress mandated that U.S. flag mariners carry credentials vetted for security by the Department of Homeland Security and vetted for proficiency by the Coast Guard. The Coast Guard has much lower information about the operator and crew on foreign flag vessels operating in our domestic waters.”
As for how the Jones Act applies to the offshore industry, Adams insists that the Outer Continental Shelf Act is pretty clear. “The Act says that, the laws of the United States are extended to the seabed of the outer continental, shelf and to all installations and other devices permanently or temporarily attached to the seabed for the purposes of exploring, developing or producing resources on the OCS. It’s simple, coastwise trade occurs when passengers or merchandise are transported between two points in the United States. The definition of merchandise is simple as well. It’s anything that requires transportation between two points in the United States. Because Congress wanted any item that requires maritime transportation to be considered as merchandise, even “valueless material” is included in the statutory definition. Again, it’s simple, a point is a point and merchandise is merchandise.”
All of that said; Adams has real world advice for those looking to save a few bucks or skirt the law: “While the statutory language is clear, real world interpretations may be based on bad information and penalties for violation can be severe. If an operator has a specific question about the application of the law to a real situation, risk can be avoided by asking Customs and Border Protection (CBP) for guidance. Many in the industry rely on logistics specialists to make their Jones Act compliance decisions. Without authoritative guidance, a questionable move that appears to be convenient at the time can lead to expensive delays and penalties. In all cases, risk can easily eliminated by asking CBP for direction.”

The Jones Act and the ultra-deepwater play – a different playing field?
OMSA’s take on the increasingly far-flung and deep water activities now developing in the Gulf of Mexico is also illuminating. Cloaking his arguments in risk-based language, Adams says, “Since the east coast and west coast are currently closed to exploration and development on the OCS, I can’t see an energy company successfully going beyond our OCS in order to circumvent government oversight. Deepwater exploration is simply too expensive to embrace a business plan that invites political risk. Political stability and predictability provide an essential foundation to justify the expense of deepwater energy activity, so it makes sense that an operator will demand a clear understanding of who is regulating the market before making an investment.”

OMSA’s take on the new ‘normal’ offshore U.S. Gulf in terms of BSEE regulations/enforcement, the evolving safety culture offshore, and the speed of permitting and sales of offshore lands and projects puts the current business climate in sharp focus. Starting with the Bureau of Safety and environmental Enforcement (BSEE), Adams and OMSA weigh in on all things offshore.
”As you know, our domestic maritime industry is pervasively regulated by the United States Coast Guard, not BSEE. While the BSEE SEMS (Safety and Environmental Management System) rule has tasked the lease holder to more closely monitor the operations of boat operators and other third party partners, BSEE has stated they are not interested in attempting to duplicate the regulatory regime of the US Coast Guard.  So, for our members, this is currently a contractual issue with their customers.
Regarding the permitting process, I have to hand it to the smart people who work for the energy companies who have achieved success in obtaining permits by navigating the extremely complex regulatory regime that governs offshore drilling.   The industry at large greatly benefited from RADM Jim Watson’s collaborative approach in his leadership as Director of BSEE. Jim’s service is appreciated and, at the same time, we welcome the appointment of RADM Brian Salerno to replace him, as Jim moves on to his new position. We expect a smooth transition and a continuation of the progress made under RADM Watson’s watch.
It is my hope that as the multitude of new regulatory and technical improvements have been applied to exploration and development with success, we will see the permitting process improved. Overtime, I am confident that smart regulations can be effective without being overly obstructive. Energy independence requires that we keep the Gulf safe and clean as we continually strive for the smartest regulations and operations possible. I am certainly optimistic- just look at how much the industry has accomplished in the last two years. 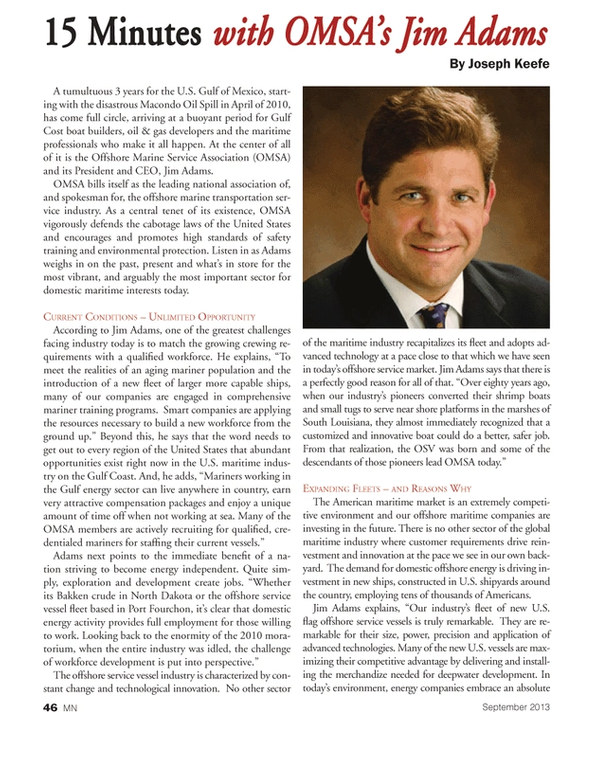