Smaller boatyards carve out a profitable niche in this challenging, yet target rich maritime environment. For Kvichak and USMI; so far, so good.

The May edition of MarineNews brought analysis of possible downstream consequences of the U.S. federal government’s ongoing austerity measures, especially where it could impact U.S. boatbuilders with backlogs tied to government funding. Susan Buchanan’s “Budget Battles Bumping Backlogs” piece brought out the good, bad and potentially ugly realities of the new normal in Washington, DC, where lawmakers tussle over spending priorities, while also leaving various casualties in their messy wake. The August announcement that the U.S. Navy would forego as much as $500 million in needed repairs on the fire-damaged nuclear submarine USS Miami is ample proof of the impact of such cuts. And yet, many yards, in the face of such news, are doing just fine.

Coast to Coast
Located on the U.S. West and Gulf Coasts respectively, Kvichak Marine Industries and United States Marine, Inc. are separated by about as much real estate as is possible here in the continental United States. Beyond this physical distance, their individual business plans are probably about as different as the real estate on which their boatyards sit. What they do have in common has more to it than their mutual skillsets in the aluminum boatbuilding trades and goes more towards the collective ability to transcend a perceived problem that potentially could affect both bottom lines. It turns out that neither group is particularly worried about sequestration; albeit for different reasons.

Kvichak Marine Industries
Founded in 1981, Kvichak Marine Industries quickly established itself as one of the nation’s most widely recognized aluminum boat builders. The diverse Kvichak portfolio includes workboat platforms that include law enforcement, firefighting, passenger ferries, piloting, and general commercial boats. The Seattle-based workboat builder was a recipient of an ARRA small shipyard grant awarded in August of 2009 which in part allowed funding of a state-of-the-art cutting table and brake. This equipment provides KMI the ability to control the schedule of its cut parts being delivered to the production floor. Just In Time (“JIT”) delivery of the cut & formed parts reduces the use of valuable boatbuilding space in the Company’s two main production facilities for parts storage thereby increasing manufacturing capacity. This vertical integration of all plate processing operations reduces overall production costs, trucking costs, carbon emissions and increases quality control of the finished product.
Over time, Kvichak has shown itself to be one of the nation’s most prolific yards, delivering since 1981 548 vessels from the Seattle yard, including 63 Response Boat Medium (RBM) craft for the U.S. Coast guard from their Kent, WA facility. The government business remains as an important part of the Kvichak mix, but not the critical element that some other yards might depend on as a primary staple. That’s because the west coast builder sees diversification as an important survival strategy.

Today, Kvichak continues to look for new and complementary markets that fit core capabilities – high quality aluminum fabrications for industries other than commercial boats among them. The ideal split in today’s markets, at least for Kvichak, probably hovers around 50/50 between Government and commercial business. And, while that isn’t always the case, the split varies but generally averages out over time.
Many smaller U.S. yards – so-called second tier establishments – are experiencing robust workloads at present; series-build and some delivering foreign. Kvichak is seeing demand there as well, and is currently working on overseas opportunities. Recent overseas deliveries include three 75’ Pilot boats to the Netherlands, a 54’ patrol boat to Nigeria, an oil skimmer to Russia and one to Italy. All that and in a market atmosphere that is certainly more competitive in some segments than it was five years ago, especially in the smaller patrol/utility boat markets. Kvichak’s current backlog remains robust with a good mix of committed work extending out to the second quarter of 2014, with a typical progression of builds slots opening up for new projects as mature ones deliver.

United States Marine, Inc. (USMI)
Founded in 1971 by the late Tom Dreyfus, USMI’s present management includes Chairmen John Dane III and CEO Barry Dreyfus Jr. Originally focused on building world class racing sailboats, since 1987 USMI has designed and built military, patrol and special warfare boats ranging in length from 21 feet to 90 feet, constructed of high performance composites or aluminum. As a fully integrated manufacturer capable of designing, building, and testing boats in house, a good percentage of their present workload also includes ongoing, regularly planned maintenance on many of its previously delivered hulls.
Located in Gulfport, MS and New Orleans, LA, on-site facilities provide space for welding, electrical, outfitting, upholstery, and painting. Climate-controlled facilities for lamination and a separate oven for post curing epoxies are a part of the advanced lamination processes used at USMI. In 2010, USMI also successfully applied for a Marad grant to help it purchase the epoxy oven, composite freezer and CNC material cutter.
USMI yards have extensive dockage and cranes for launching boats and water based activities. All facilities connect to the Intracoastal Waterway, Lake Pontchartrain, or the Mississippi Sound providing riverine and littoral type environments, as well as varying water conditions for trials and training. The open waters of the Gulf of Mexico are nearby and are used for deep or rough water testing.
USMI’s Barry Dreyfus, unlike others who in May claimed that demand from U.S. FMS clients had declined and timelines delayed, reports a brisk pace of business. Boasting a current backlog which entails virtually 100 percent government contracts, this sort of mix might make other yards somewhat nervous, given the current political winds. Not so for Barry Dreyfus and the USMI team. Indeed, and while others fret about sequestration, Dreyfus insists, “USMI has not seen a decrease in FMS contracts. What we have experienced is interest from new potential FMS clients who have observed USMI craft in use by current clients. The speed, quality and mission successes of these craft have generated much interest in foreign navies around the world.  We currently have two FMS programs in progress, with discussions in progress for an additional two potential contracts.” He adds, “We have not encountered any delays in timelines, including delivery and acceptance schedules, due to issues with NAVSEA PMS 325.”
Other USMI customers include the U.S. Special Operations Command, U.S. Dept. of Defense, NAVSEA PMS325, Navy Expeditionary Combat Command, U.S. Navy, U.S. Army, U.S. Customs Service, NAVO and MSRC. With 200+ vessels delivered 1987, the yard today continues to be fully engaged. With ten vessels recently delivered to Kuwait under the FMS program, Dreyfus says his foreign military sales (FMS) work is steady, with the biggest region for those deliveries being the Middle East. And, he insists, “In terms of FMS dollars, 90 percent of that money is spent right here in USA. Sequestration is simply not involved.”
It is arguably a good time, sequestration fears aside, to be building riverine and other smaller scale boats for global navies. That’s because the era of the 600’ platform as the primary weapon of maritime power and law enforcement is rapidly coming to an end. That’s good news for USMI and its 25 years of experience in developing, delivering and supporting combatant craft for the both the United States Navy and Foreign Military Sales Customers. During that time, USMI has designed and delivered eleven different types of craft (over 600 boats in total). These craft include but are not limited to the 82’ MK V SOC, 90’ MKV-PB(C), 90’ MKV-PB, 11 meter Naval Special Warfare Rigid Inflatable Boat (NSWRIB), 33’ Special Operations Craft Riverine (SOCR), and the 33’ Riverine Assault Boat (RAB). Significantly, USMI owns the designs of the majority of the craft it has delivered.
USMI facilities are rarely idle, says Dreyfus. In between projects, employees work on upgrading and improving infrastructure. Maintenance of previously delivered units – Dreyfus calls it ‘cradle to grave work’ – account for as much as 30 percent of this builder’s man hours. In fact, USMI is currently providing a port engineer to support FMS customers. Since the move to its current facilities, the company has doubled in size – physical size, employees and business backlog. Dreyfus reports a stable, well-trained workforce of about 200 employees. And, as a builder for the military, ISO 9001 certified USMI arguably does as much as any other domestic contractor.
The USMI business plan is built upon zero debt – long and short term. Dreyfus explains, “We build only what we can afford to build.” Like other domestic builders, USMI hedges its bets by actively seeking overseas work and is actively pushing its products to a number of foreign countries, including Kuwait. The USMI resume includes deliveries to at least nine foreign entities and says Dreyfus, the USMI backlog extends well into 2015.

No Magic Formula
In a seemingly rare era where U.S. shipyards find themselves, by and large, far busier and more profitable than many of their foreign counterparts, Kvichak and USMI are two yards that seem to be riding the current wave nicely, despite having some or all of their eggs in the government basket. The boom in domestic oil production has fueled a resurgence of the Jones Act tanker trade, and the resultant demand in replacement tonnage. Crowley’s August announcement that it had entered into an agreement with Philadelphia-based Aker Shipyard (APSI) for up to 8 additional tankers more than underscores that trend. Separately, a robust offshore support vessel building program is underway from any number of domestic operators and the repowering plans for all domestic fleets, consistent with newer and more stringent emissions standards, also continues at a brisk pace.
The newfound domestic boatbuilding boom seems unlikely to end tomorrow. Hence, any worries about government sequestration issues, for the time being, are being eclipsed by increased commercial sector work. Beyond this, the quality and price of U.S. output is attracting many foreign orders. Kvichak and USMI, of course, are part of that metric, but countless other yards are getting the job done, too. Each has its own way of doing it, but a major theme beginning to emerge is the rapidly diversifying portfolio of U.S. yards – across vessel types, domestic and foreign deliveries, and, of course, government and commercial sectors. Sequestration? What sequestration? 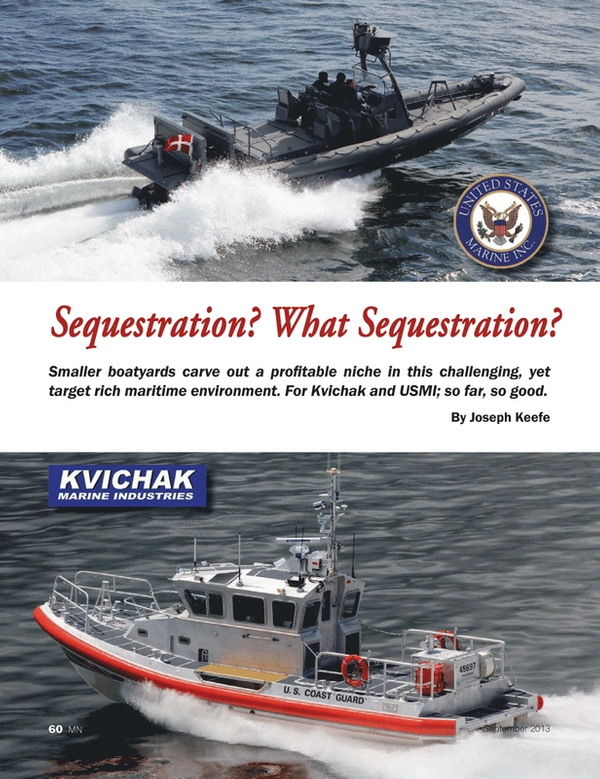