Pop Quiz: Think back to the last time that U.S. Shipyards were operating at the breakneck pace now being seen from coast to coast. Now, think about that in context of slowing global demand brought on by overbuilt bluewater sectors. Next, factor in the breathtaking newbuild programs underway in the offshore support, inland marine and Jones Act sectors. And, don’t forget the increasing demand from foreign operators who, more and more, are beginning to understand that U.S. shipyards can build economically in series, for export and with quality that matches or exceeds global standards. Finally, plug in the shrinking trade deficit represented by energy that could eventually eliminate our dependency on foreign oil forever, powering prosperity that could last for a generation.

If you are at a loss for an answer to this month’s MarineNews brainteaser, then you will find yourself in good company. It has been a long time since the stars were aligned quite as nicely as today’s domestic marine markets seem to be. Although a little out my wheelhouse, I could also throw in the hefty charter rates being paid to Jones Act operators to move all of that new domestic energy. I don’t think it any coincidence, therefore, that this money is being redistributed into domestic newbuild tanker programs. Starting on page 104, you’ll find out why the AT/B will have a prominent role in that piece of business. Indeed, things are so good, apparently, that shipyards and operators alike are having a difficult time finding competent help to keep this economic juggernaut moving.

These are good problems to have. That said; it’s no time to take our foot off the gas, nor is it a good time to forget where we came from, why, and what to do to ensure that the current boom doesn’t become just another cycle rather than a sustained period of prosperity. John F. Kennedy said it best when he insisted back in 1963, “A rising tide lifts all the boats.” This month, Susan Buchanan’s report on the U.S. Gulf Coast’s building boom aptly describes what oil and gas producers can expect for support in coming years, and why. As the domestic offshore support fleet becomes more modern and sophisticated, two things will likely occur next: first, the arrival of the long-awaited two-tier charter market and the “flight to quality” envisioned by operators – like Todd Hornbeck, for example – will finally come to fruition. Secondly, partly because of the first supposition, the specter of overbuilt Gulf of Mexico OSV market will not. That’s my take.

Finally, and since this is after all our Workboat Annual edition, the pages of this, our largest MarineNews edition ever, also contain the full spectrum of all things “workboat” and the service and OEM sectors that support it. Headlong into the 4th quarter of 2013, I might be accused of being a bit too optimistic about the current state of the domestic waterfront. I like my chances about being right. Turn the pages to find out why.

+ As first shown in the September 2013 print ediion of MarineNews + 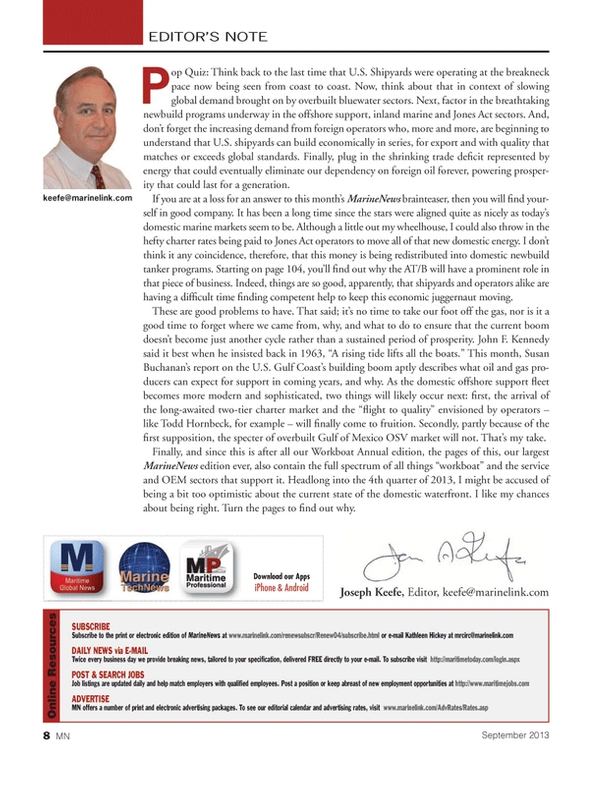