The ATB – What Does The Future Hold?

The AT/B comes of age: operating coastwise, Jones Act – and beyond the horizon, too.

A great deal has been written about the capabilities of the AT/B, or “Articulated Tug/Barge” unit in recent years. Without a doubt, though, the concept is firmly established as a viable ocean and coastwise transportation system in North America. But like any transportation asset, the concept has to not only expand its’ capabilities, but also conform over time to ever-changing rules and regulations. It must also be able to embrace and adapt to changes in technology that hold the promise of reduced emissions as well as savings in fuel and protection of the environment.
AT/B’s recently placed in service as well as those on the drawing boards today, are indeed being designed around these principles and future AT/B’s promise higher speeds per HP, lower fuel consumption and the application of all manner of “green” technologies in their construction.

Early on
The United States and Canada both built their modern coastwise transportation networks around self-propelled vessels. Once the age of powered vessels was born, the development of non-powered barges, towed by powered tugboats, began in earnest. The earliest barges were created from sailing vessels, and indeed, some even retained their sails, to assist in the movement of the tow. In fact, non-self-propelled vessels pulled by mules, or free-drifting in the current, had been common along North America’s rivers and canals for many years.
When it came to offshore and coastal operations, towed barges had a lot of issues when held up to the light of both fuel consumption and schedule reliability. There was also a desire to increase the safety factor in tug and barge operations by exerting better control over a barge than to have it on a long towing hawser. Looking at the entire situation, the solution was obvious enough. Create a tug and barge that could operate with the crew of a traditional tug and barge,  yet could be weather-reliable and safer to operate in heavy seas, with increased speed where that speed would be useful.
Pushing a barge yields better speed than towing it. By its very nature, towing involves adding enough resistance to a barge stern that it will “follow” the tug. If you are pushing, then you want that this resistance penalty is removed. So, various patents to connect a tug and a barge with a secure mechanical connection, were filed - all the way back into the 1800’s. In the late 1960’s, Edwin Fletcher with ARTUBAR, and the Bludworth family of flexible pushing systems, were pioneering efforts to marry the economies of pushing, with the safety/seakeeping inherent in mechanically linking the tug and barge at sea. Other systems were developed and tried; not all were successful.
The AT/B owes its current state of the art, in large part to the progression in development of ARTUBAR, and BLUDWORTH in the U.S., and then the landmark ARTICOUPLE system in Japan, followed by the INTERCON system in 1986. The 21st century has now also seen the wide application of the JAK system on small to mid size AT/B’s.

Safety: Second to None
The safety record of the AT/B has been excellent. No double-hulled AT/B has ever been involved in a cargo spill incident and only one AT/B has been involved in a collision that resulted in a spill and that was judged to be human error on the part of the bridge crew of all three vessels involved in the collision – which included a ship. There has been no loss of life on an AT/B.
The field of AT/B design has seen great advances in recent years. AT/B’s were among the first  tank vessels to adopt double hulled cargo tanks and AT/B tugs were among the first to employ double-skin fuel tanks. AT/B designers are also among the most prolific users of large-scale model testing and have been among the earliest commercial users of Computational Fluid Dynamics software to optimize their designs.
Today’s naval architects include specialists in AT/B design and Robert  Hill of Ocean Tug & Barge Engineering Corp., of Milford, MA has specialized in the design of AT/B’s for many years. His success comes, in part, from a willingness to innovate. “AT/B design has more than kept up with the times,” Hill told MarineNews in August. “We have, as an engineering-industry, worked tirelessly to stay ahead of the various technology curves and have even been responsible for  many innovations that apply to other fields of ship design.” He adds, “With all the talk of reduced bridge complements, the tug and barge industry has been safely running single-officer bridges for decades.” Naval architects serving the tug/barge industry have long dealt with the needs of designing a vessel to be easily operable by a compact crew size, as well as making the boats themselves far more crew-friendly. That effort continues today.  AT/B accommodations and designs are among the most comfortable available – they have to be, given the problem the entire maritime industry has in attracting and retaining crew members. According to Hill, “The boats HAVE to be good and the principal designers in this field are collectively among the best multi-discipline naval architects in the world.”

Built to Order: Fit for Purpose
Modern AT/B’s are being increasingly designed for ship-like speeds. For example, OT&BE’s “RAPID” class AT/B’s will be capable of 15 to 16 knot speeds and the design is being used at this very moment in designs being prepared for AT/B’s to carry containers and compressed/liquefied gasses. Hill insists, “It is not pie in the sky, nor is it a claim with no back-up to it.” Today, AT/B’s are being developed to run on LNG and to employ advanced, American-made diesel and gas-electric drive systems. And Hill insists, “These are not research projects – designs are being prepared for building.” In OT&BE’s office alone, designs are underway for refrigerated gas carriers, two types of container-carrying AT/B’s, LNG bunkering AT/B’s, the tug portion of an AT/B dredge, AT/B’s for project cargoes, and a recent boom in inquiries for 110, 150 and 190,000 barrel capacity crude carrier AT/B’s (reflecting the new prosperity in U.S. crude oil stocks and the rejuvenated U.S. coastwise tanker trades) has resulted in further design work. “We’re all very busy,” Hill says of the principal designers of AT/B’s worldwide, “Not only here, but overseas as well.”
Both vessel Owners and their charterers are asking more of the AT/B’s they build and charter. They are looking for vessels that can save fuel, reduce their emissions, and provide top quality accommodations for the crews. The vetting process that AT/B operators go through when chartering vessels to oil companies and their subsidiaries, is the same vetting tanker Owners must deal with. Being a tug and barge does not allow for any “slack” in the requirements on any level. AT/B’s are widely employed because, says Hill, “… they meet those requirements and they do the job they are chartered to do and they do it safely and efficiently”

Horses for Courses: Here and Everywhere
Today, AT/B’s operate on trans-oceanic routes; they operate from the Gulf Coast to the east coast, to South America, and even to Europe. From the west coast they service Alaska, Hawaii and the Pacific Islands. One even runs military equipment to far-away bases. Bulk units move everything from coal to grain to rock, to iron ore, to virtually any mineral needing transportation. Tank barges move a huge range of crude and refined product as well as chemicals and liquefied gasses. They take dangerous cargoes off rail lines and highways and route them safely at sea as opposed to moving them through cities and towns. That’s not to say that the AT/B is a universal panacea for any sort of ocean trade route. That said; where an AT/B can fit into a particular slot, it will generally do it VERY well.

AT/B’s Evolve: Shipyards, too
As AT/B Designers, Owners and Crews are evolving – so, too, are the shipyards that build these boats. The so-called “Second Tier Shipyards” – the yards that build many of the AT/B’s – are anything but second tier today. Many have become specialists in the building of AT/B’s, utilizing modern infrastructure that rivals some of the larger commercial shipyards. Hill notes that all of the fine design work in the world means nothing, if an equally fine builder isn’t there to make the design come to life.
Over time, Ocean service AT/B’s have been built in Maine, Rhode Island, Florida, Alabama, Mississippi, Texas, Louisiana, Oregon, Washington, Pennsylvania, Wisconsin, Ohio, Michigan and Indiana. The industry has provided shipbuilding jobs in fourteen states. AT/B ocean barges are built in inland river shipyards and their attending tugs can be built in an even wider range of coastal small vessel construction yards. Collectively, these shipyards are among the most productive in the world and according to Bob Hill, even foreign AT/B customers are looking to American yards to build their AT/B’s. “It is a trickle, right now, but it is there and if what my clients are saying turns into contracts, American yards may be building soon for overseas clients.” Indeed, they are already doing so in other sectors. AT/B’s could be next.

Innovation and Improvements
AT/B’s have kept apace of their single hull counterparts include Emissions and Environmental Protection, Crew Comfort, Fuel Consumption, Constructability, Reliability In Service and expansion of services & trade routes. Beyond that, electric drive systems employing multiple generator/VSG/DC Bus/PM motor and generator configurations have the potential to reduce duel consumption on certain AT/B’s by over 20%. A Jones Act AT/B gas carrier slated to go to shipyard bid in December of this year and another, a container AT/B are both similarly designed with these features. Innovative solutions to both hull production and assembly are being carried out by Senesco Marine, while VT Halter has produced the largest class, and second largest class of AT/B’s to date. The extensive use of 3D CAD design in both design offices and shipyards, makes it possible now to expand the kinds of hulls that can be created in the name of higher speed.

Looking Ahead & Back …
New trade opportunities assure that new kinds of AT/B’s will be built in the future. From small landing craft type, multi-purpose units designed to supply outlying Aleutian Islands with the necessities of life, to LNG carriers, to specialized chemical carriers, to the first vessels designed to fulfill the Marine Highway (shortsea shipping) promise, these versatile vessels are finding their way into the American merchant fleet in ever-increasing numbers. The same holds true in overseas markets as well.
What was once labeled by opponents as a “sorry excuse for a ship,” the AT/B has gone about its business, proving time and again that it has earned a well-justified place in the world’s merchant fleets. 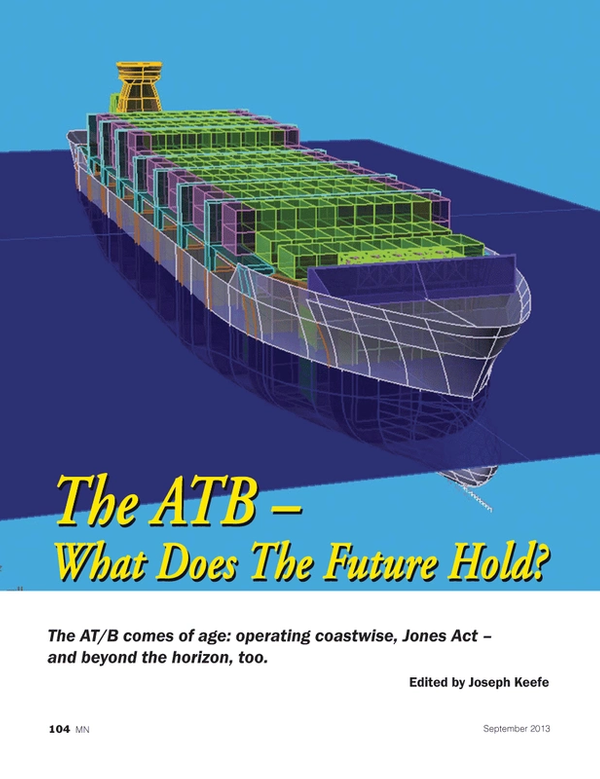 Read The ATB – What Does The Future Hold? in Pdf, Flash or Html5 edition of September 2013 Marine News