The PI-65 is a tactically sized Coastal and Offshore Craft, designed to be a highly reliable combatant craft capable of operating from land or maritime platforms. The general mission of PI-65 is to provide the operational capability to persistently patrol in shallow littoral areas beyond sheltered harbors and bays, and into less sheltered open water out to and past the Departure Sea Area (DSA), and to safely operate in “Beaufort 10” or less sea and associated wind conditions, for the purpose of force protection of friendly and coalition forces and critical infrastructure.
As the role of the 600-foot warship becomes less effective in these times of piracy, terrorism and other growing security threats, envision a future where a new Naval concept emerges using a large number of small high-speed vessels capable of speeds of 50 knots. Imagine a squadron of four PI-65 vessels, loitering with five-man crews (augmented by special boarding teams) who provide visual confirmation of vessel shipments headed toward Southeastern U.S. ports while providing a visual deterrence for Homeland Security and also be on call for maritime emergencies.
Upon orders to deploy for interdiction, PI-65 gas turbine powered boats can switch from electric APU fuel conservation auxiliary power to main turbines running at 75% power bringing the craft on plane to 50 Knots for the high intercept speed and to set coarse set course for simultaneous interdiction. This concept, more and more, will become a realistic scenario as the war on terrorism becomes more intensified and as terrorists and other clandestine naval operations against the United States shipping lanes and ports intensifies. When it does, maintaining patrol, interdiction and surveillance programs will require more vessels, extending the area of coverage, using smaller high-speed vessels that are designed to cover large amounts of ocean in rough sea conditions. Enter the PI-65.
Four years in development, the PI-65 is already in production, with two vessels already delivered to undisclosed government buyers and several more are in the pipeline; none, however, with the new Gas Turbine / APU Electric Drive arrangement. That’s about to change because the new arrangement saves fuel, increases at sea endurance and produces (very quickly) speeds of up to 50 knots.
Euro Marine Ltd. has re-defined a hull-form concept that was originally conceived in the early 1950s, that original concept, had the potential for incorporating advantages of the other popular hull shapes, but eliminated the disadvantages. The craft boasts several other advantages, as well. As the single engine propeller operation of the EML “Hydro-Multi-Lift” hull form does not push against the keel of the vessel, the vessel steering is not effected as in Deep V hull forms, thus the water entering the propeller area is clear of turbulent backwash from the keel. The EML “Hydro-Multi-Lift” hull design is on plane quickly and efficiently, conserving fuel for longer range and extended cone of interdiction coverage. In analysis (see diagram), the forefoot of the “Hydro-Multi-Lift“ hull has a sharp, V-shaped entry to cut through seas easily, crisply and with minimal splash. Another important benefit to the “Hydro-Multi-Lift” hull design is its very shallow draft. The low displacement of newly introduced “Alustar” a  high strength, light weight corrosion resistant marine aluminum, coupled with the elimination of the deep-V amidships, makes it possible to confidently maneuver the PI-65 in areas far too shallow for other ships, and to follow the bad guys, where larger ships fear to go. In other words, the ideal hull design for oceangoing Patrol / Interdiction / Surveillance Craft.
www.euromarineltdpatrolboats.com 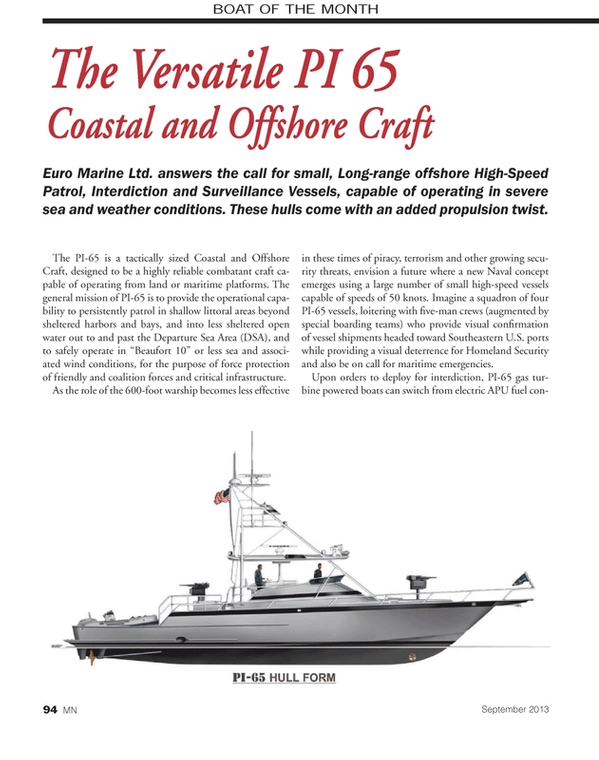