The Company:
The Patterson Manufacturing Company began operations in 1858 on the banks of the Monongahela River in Pittsburgh. In the 1950s, they began designing and manufacturing towboat and barge winches, something which the firm is now best known for. In the beginning, Patterson made just a few sizes of winches, but now offers winches with capacities from 20 tons to 90 tons and in three operating formats: manual, electrical, and hydraulic.

The Case:
Over the years, Patterson has improved the winch by listening to the needs of the end user. The results are increased safety and winches that require less maintenance. For over 150 years, they’ve protected, pulled and performed – for you. For decades, there were only a few choices when it came to winches and ratchets. But winches and ratchets have their downsides: fouling and birdnesting can and do happen. Wire rope is heavy, and traditional rigging takes a lot of it. Old-fashioned winches require a good amount of time and effort to operate. In 2008, the Patterson Manufacturing Company developed the YoYo Barge Winch, a revolutionary design that reflected a total re-thinking of the way winches do their job. Within the next few months, Patterson is on track to deliver its 10,000th winch—a significant milestone that reflects just how thoroughly the YoYo has advanced in North America’s waterways in just a few years.

The Product Line:
The YoYo is a direct result of customer feedback. Patterson engineers originally come up with an idea for a YoYo-style power winch, but it turned out that what customers really wanted was a manual winch for barges. Patterson expanded the idea from there and since then, industry has embraced it. Today, counting rebuilds and re-rigging, the YoYo has been the preferred winch for several years for more than 50% of the winches in play on an annual basis. With approximately 4,000 to 5,000 winch-sale opportunities per year, that’s a lot of YoYos.
For the inland waterways shipping industry, it means heightened productivity and profitability. Because the YoYo uses a single-stacking design, operators no longer have to deal with springcoil, fouling, and uncontrolled spooling. A patented double-dog design allows easy maximum line tensioning and makes it simple to use. The 25 feet of takeup (or 40 feet for tank barge applications) mean less wire rope to heave around and eventually untangle. The YoYo is 50% faster than ratchets, which, according to the company’s innovative ROI calculator, means that the winch actually pays for itself in a short amount of time. Safety is also a plus—less birdnesting means fewer man-overboard opportunities. Today, the increasing prevalence of the YoYo is leading naturally to a positive change throughout the entire inland shipping industry: standardization. 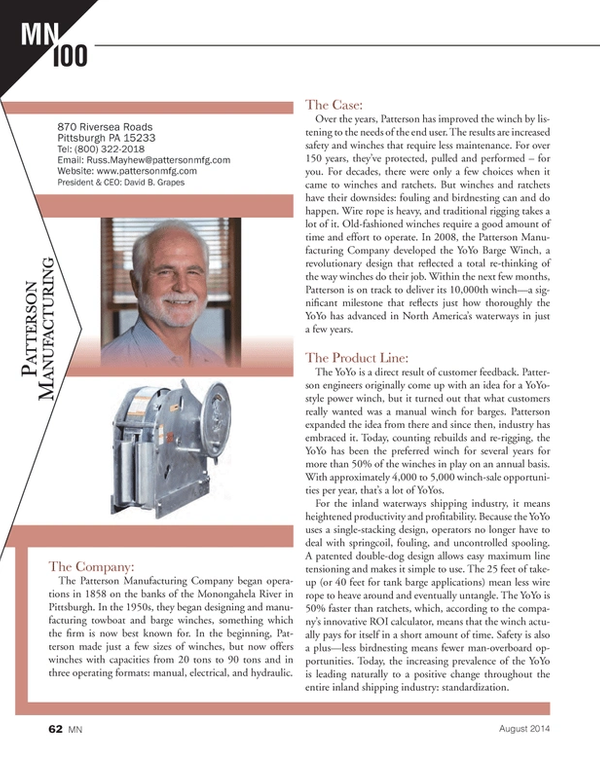