The Company:
Eastern’s original shipyard was established in 1976 for the purpose of constructing commercial fishing boats for the company’s founder and President, Brian R. D’Isernia. By 1980, 26 commercial fishing vessels had been constructed and delivered. D’Isernia eventually decided to diversify Eastern’s reputation from a ‘Fishing Vessel’ shipyard into a shipyard that could fulfill any type of custom vessel request, large or small. In 1981, Eastern’s diversification began with the delivery of its first Offshore Supply Vessels. Today, Eastern’s history includes a portfolio of over 325 vessels and it is one of the most diverse vessel construction companies as a result of its state of the art product line and fabrication process.

The Product Line:
As the owner of a fleet of commercial fishing vessels, Mr. D’Isernia ventured into the world of shipbuilding after learning first hand that the only way to get the type of vessels he wanted was to design the vessels, write the specifications, and build them himself. As he built and developed his own personal fleet of vessels, other professionals in the industry took notice and also began desiring their own custom built vessels. Soon customers in areas including New England, the Pacific Northwest, and Alaska were contacting Eastern with requests for customized fishing vessels. Eastern’s proven successful shipbuilding record stems from the fact that it is willing to accept any new challenge and are confident that they can successfully build and deliver any type of vessel that Clients require, both on time and on budget.  As Eastern moves into the future, it looks forward to the continued diversification and growth of its already considerable portfolio of vessels which brings new challenges and ultimately grows the company. As ample testimony to that goal, in February, it was announced that Eastern Shipbuilding had been selected as one of the three finalists to design the United States Coast Guard’s new Offshore Patrol Cutters (OPC). In accordance with the terms of the $22 million dollar Phase I finalist award cap, Eastern will spend the next 18 months finalizing the engineering and ship design with the goal of becoming the final shipyard selected to build the first OPC vessel. 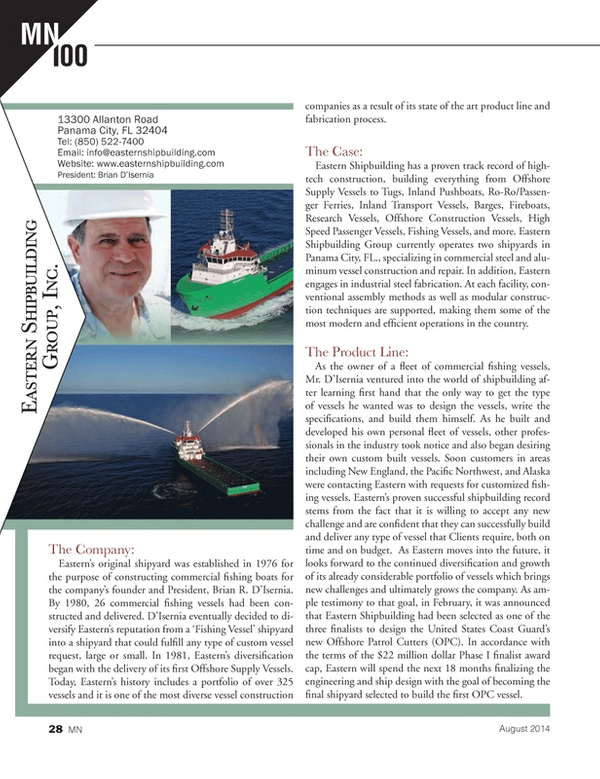