Colt Industries' Fairbanks Morse -Engine Division of Beloit, Wis., has received an order for four diesel engines that will supply all of the electrical power for a huge offshore drilling rig;—the Ocean Ranger. The engines will be built for Ocean Drilling and Exploration Co.

of New Orleans, La., a major company involved in drilling for oil and gas around the world.

The four Fairbanks Morse Model 38TD8-^ opposed piston engines will each be 12 cylinders, 3,600 horsepower and turbocharged. A unique feature will be a double rpm rating depending on the service required. At .720 rpm the engines will generate alternating current for drilling, work power and personnel accommodations.

At 900 rpm, direct current will be generated which will be used for propelling the giant craft.

Each of the four engines will be skid mounted and direct connected with electric generators.

The Ranger is a semisubmersible super rig, 391 feet long by 262 feet wide. Twin lower hulls will house electric motors which will produce a total of 14,000 horsepower to propel the rig 'by a twin Kort nozzle system. It will have the capability to drill from a floating position in water depths up to 3,000 feet.

More than 40 Fairbanks Morse diesel engines are supplying power for ODECO drilling rigs around the world. The Ocean Ranger has been designed to operate in any drilling environment worldwide. It has the capability of operating for extended periods without the need for being tended by supply boats because of enlarged material storage capacities.

The mooring system will consist of twelve 45,000-pound anchors with a combination 3}£- inch chain and cable with a breaking strength of nearly a million and a quarter pounds. There will be living quarters for 100 men. A heliport on deck will support a helicopter for transporting personnel and equipment. The rig is scheduled for completion in the spring of 1976. 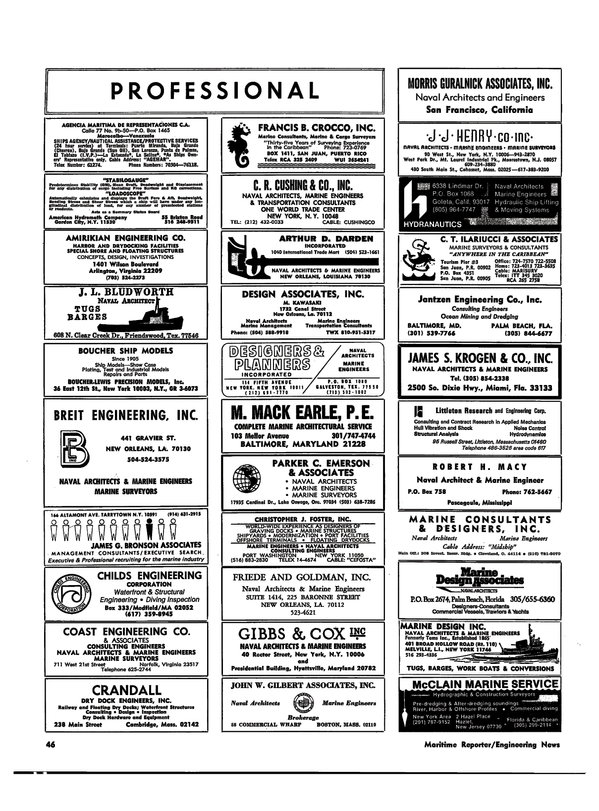