The motor vessel Dennis Hendrix, a new 8,400-horsepower towboat in the fleet of American Commercial Barge Line Company, was christened in ceremonies Saturday, July 16, at the riverfront in Owensboro, Ky.

The vessel, which is equal to the largest and most powerful towboats operated by ACBL, the principal operating company in the Inland Waterways Services Division of Texas Gas Transmission Corporation, was named to honor Texas Gas president Dennis Hendrix.

The ceremony was held at the foot of Frederica Street, where the new towboat was docked. Master of ceremonies was H. J. Bobzien Jr., president of the Inland Waterways Services Division. J.

W. Hershey, chairman of American Commercial Lines, Inc., and a member of the Texas Gas board of directors, was the principal speaker.

The highlight of the traditional ceremonies was the actual christening of the towboat, at which time the sponsor, Mrs. Jennie Hendrix, broke a bottle of champagne over a capstan on the forward deck and officially named the vessel in honor of her husband.

The Dennis Hendrix is the sixth ACBL towboat in the 8,400-horsepower series. It will join 51 other towboats in the ACBL fleet, which also includes approximately 1,500 barges, in moving tows of various types of freight on the inland waterways. The Hendrix was constructed by Jeffboat, Incorporated of Jeffersonville, Ind., and was launched there May 28 to undergo final outfitting while it floated on the Ohio River. Jeffboat also is a unit in the Inland Waterways Services Division of Texas Gas.

The Hendrix, like the other towboats in the 8,400-horsepower series, is a triple-screw craft capable of moving barge tows of 50,000 tons or more. The vessel's three diesel engines, which will generate 2,800 horsepower each, turn three five-bladed propellers that are 9 feet 2 inches in diameter.

Three steering rudders and six flanking rudders, all streamline, are operated by independent hydraulic systems. The vessel is 180 feet long and 52 feet wide.

Closed-circuit television enables the vessel's captain or the pilot on duty to maintain a constant visual check on the engine room and other areas of the towboat. 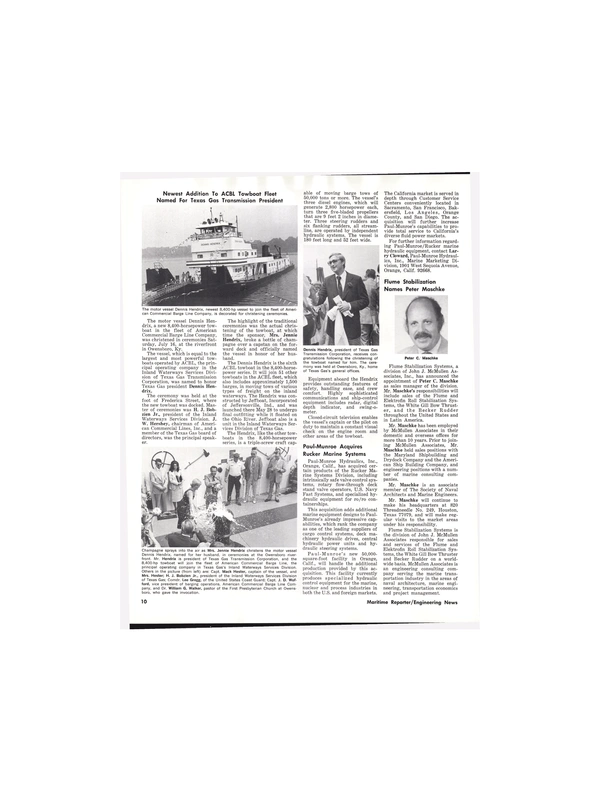