Of British Columbia, The New Skeg Design Results In A 10 To 15-Percent Higher Speed Or 20 To 30-Percent Reduction In Power Required To Tow Loaded Barges At The Same Speed A Canadian invention which reduces the power needed to tow loaded barges by up to 30 percent was used to speed the delivery of the drill rig Interocean II from Japan to the U.S. Gulf recently.

An average speed of 10 knots was achieved under the most adverse towing conditions on a semisubmersible barge which is 400 feet in length and has a 100-foot beam.

The barge is owned by Genstar Overseas Limited of Hamilton, Bermuda, and operated by Global Transport Organisation.

Hydralift Skegs, developed by Seaspan Development Co. Ltd. of Vancouver, British Columbia, are a dramatic breakthrough in skeg design, resulting in 10 to 15-percent higher speeds or 20 to 30- percent reduction in the power required to tow at the same speed.

Conventional skegs create a significant drag as they provide the necessary stability. This increases the power required to tow them.

This new skeg design applies the principles of aerodynamics to the design of skegs. A lift is induced by the airfoil shape of the skegs to establish stability while at the same time producing a forward component of lift, thereby reducing drag.

The theory was exhaustively tested over a two-year period by its inventor Josip Gruzling, and Jacques Heyrman, the vice president of the development subsidiary of Genstar Marine Limited.

This resulted in a 400-foot by 100- foot barge sliding down the ways in Japan in 1976, equipped with the Hydralift Skegs. The barge, which is owned by Genstar Overseas Limited, was followed by five sister barges.

Mr. Heyrman, speaking in retrospect, described the invention of the Hydralift Skeg as an amazingly simple and obvious concept.

"It was simply a matter of transferring known principles from an air medium to a water medium," he said.. . . "No moving parts, yet this skeg system saves fuel and conserves energy—to say the least, it is a timely invention." Hydralift Skegs are a radical departure from conventional skegs in current use. Conventional skegs increase total barge resistance by 25 percent to 50 percent.

Hydralift Skegs not only provide the required directional stability of the towed vessel, but maintain a total barge resistance close to or even in some cases slightly less than the bare hull resistance of the vessel.

Hydralift Skegs consist of a number of vertical, high aspect ratio foils fitted to the barge and positioned at each side of the stern barge rake, and horizontal foils connecting the bottom tips of each set of vertical foils.

The key to the remarkable efficiency of the Hydralift Skegs is the optimization of skeg profile and angle of attack to the flow of water. The invention enables this to be applied specifically to each barge design. The barge is stabilized by lateral lift induced by the foils which counters the drift of the barge stern, and which at the same time generates a forward component of lift which not only cancels out the frictional drag of the skegs but cancels out some of the barge hull resistance as well.

Hydralift Skegs are of benefit to barges over 5,000 tons deadweight, contemporary barges with shallow rake angles compatible with Hydralift Skegs, and particularly to barges used on long distance hauls where the transit portion is a high percentage of the total transport cycle.

(SeaDevCo), based in Vancouver, British Columbia, Canada, is an arm of Genstar Marine Limited established to research and develop technological advances in marine transportation in association with Seaspan International Ltd., Canada's foremost tug and barge company. Genstar Marine, through its operating companies and affiliated organizations, is also involved in marine transportation in the Canadian Arctic and in eastern Canadian waters.

The development of Hydralift Skegs was achieved by this group and Hydralift's exclusive design consultant, Nautican Research & Development Ltd. SeaDevCo makes the device available in three ways: 1. The use of the invention under license arrangement to shipyards, builders, naval architects and owners. SeaDevCo prefers to be involved not only in the design but in the construction stages of the new equipment as well.

2. Design of the skegs by Sea- DevCo and fabrication by Vancouver Shipyards Co. Ltd., a sister company located adjacent to Sea- DevCo. The skegs would then be made available to owners for installation under SeaDevCo supervision.

3. For vessels which trade in the Pacific Coast Region, design of the Hydralift Skegs by Sea- DevCo and fabrication and installation of the skegs by Vancouver Shipyards. This would involve the installation of the new replacement skegs on barges already in operation, as well as new barge construction. 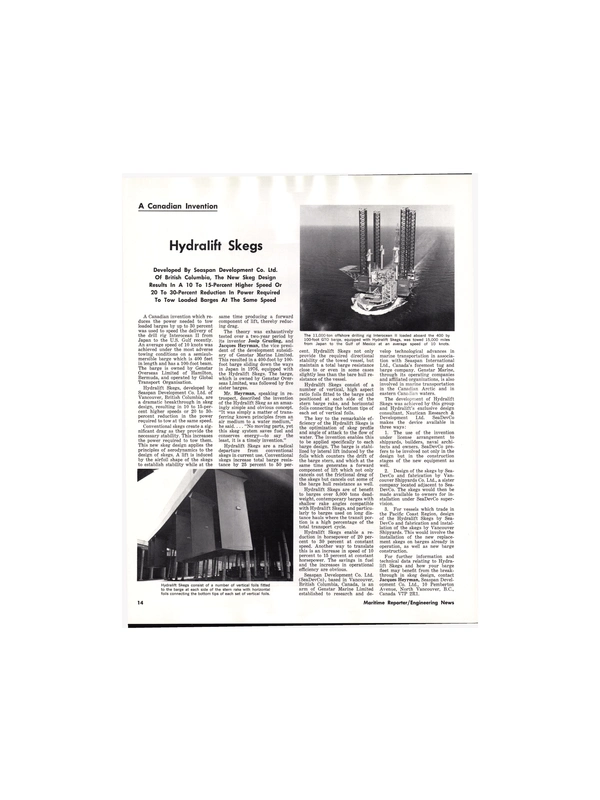