The General Electric Credit Corporation announced it has purchased for $120,000,000 the 225,- 000-dwt tanker T.T. Stuyvesant, and that the vessel has been initially chartered to the Standard Oil Company of Ohio (SOHIO) to transport Alaskan oil.

The VLCC (very large crude carrier) was built by Seatrain Shipbuilding, a subsidiary of Seatrain Lines, at the former Brooklyn Navy Yard, and is a sistership to the Brooklyn and Williamsburgh, which also are owned by GE Credit.

The Stuyvesant, like its sister vessels, is capable of delivering 1,600,000 barrels of oil.

GE Credit has arranged a 20- year leveraged lease of the vessel to the newly formed shipping corporation, Queensway Tankers, Inc., which in turn has arranged a three-year time charter to SOHIO to transport North Slope oil from Valdez, Alaska, to Panama.

Because the Stuyvesant is too large to negotiate the Panama Canal, it will offload its cargo at Balboa for delivery in smaller tankers to Gulf Coast refineries.

A spokesman for GE Credit said the purchase-lease-charter deal was unusual in that it was put together in just two months.

GE Credit, headquartered in Stamford, Conn., is a wholly owned subsidiary of General Electric Company and the world leader in leveraged leasing of industrial and transportation equipment, with more than $3 billion in such equipment on its books.

GE Credit acquired its first VLCC, the Brooklyn, in December 1973. At that time, it was the largest commercial vessel built in the United States. The Williamsburgh was purchased one year later.

The Brooklyn and the Williamsburgh are under 25-year time charters to American Petrofina, Inc., a subsidiary of Petrofina S.A. of Belgium. 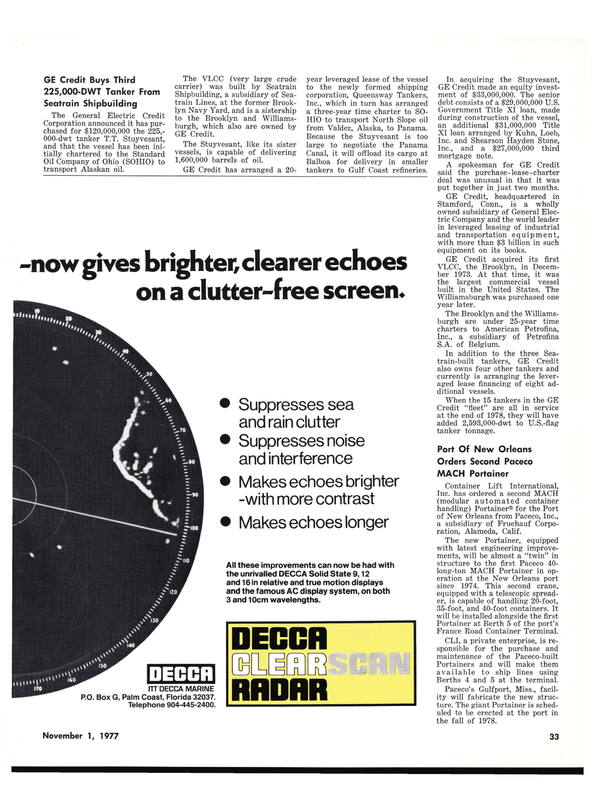