The announcement of this new concept in marine propulsion was made at a press conference in New Orleans by Harold P. Halter, president, Halter Marine Services, and Prieur Leary, president, Acadian Marine Service.

Acadian Marine is an owner/ operator of offshore support vessels for the oil and gas industry, and the new class of vessels was designed by Halter to Acadian's operational requirements. This new design is the subject of a patent application filed by Halter.

The conventional tug/supply vessel is considered a fine machine in its own right, but an optimization was required to permit extended use, extended versatility, extended efficiency and savings for the offshore charterer.

Diesel-electric propulsion is not new to the marine industry, but the SCR diesel propulsion system represents a major change in the design and operational capabilities of the specialized offshore tug/supply vessel since its introduction to the oil and gas industry in the late 1940s and early 1950s.

There has been a slow evolution of the typical offshore service vessel since its inception in the beginning days of the offshore industry — the placement of the deckhouse forward, the installation of more powerful engines, the f i t t i n g of anchor-handling winches and equipment, stern rollers, bow thrusters for maneuverability, improved electronics for navigation and communications, and the placing of mud tanks below deck.

Basically, the utilization of the SCR propulsion system reduces total ship diesel horsepower required by the efficient use of the installed horsepower, thereby reducing the use of fuel and extending engine life. Primary diesel engines are moved to any area of the hull, with stack location dictated by economics, increasing operational payload of the vessel.

Towing advantages are increased greatly because all available horsepower is used, high reliability is obtained in the power system, and the system permits flexibility in design and construction, in usable horsepower and in operational applications.

Mr. Halter stated during the press conference that: "We have been constantly involved in designing and building more efficient offshore oil and gas industry support vessels. Uppermost in our minds has been the need to reduce the fuel consumed by the typical tug/supply vessel, the need to save as much energy as possible and at the same time to maintain or increase the power and towing and other operational capabilities of the vessel. There has also been the need to create a new class of tug/supply vessels within certain size ranges that could operate effectively in a variety of offshore oil fields, a vessel flexible enough to work, for example, in the North Sea under one set of conditions and in the Gulf of Mexico under entirely different conditions. We feel that this new design is so innovative that we have applied for the appropriate patents.

"The development of the SCR propulsion system for tug/supply vessels has, we feel, accomplished these objectives. But the flexibility of the vessel using this type of power does not end with its fulfilling the basic operational requirements of getting somewhere efficiently and more profitably for its owner. A great number of the vessel's services systems can be tied directly into the SCR system without decreasing the propulsionpower output. The SCR equipment can power the ship's pumps, cranes, fire-protection system, an- chor-handling and bowthruster equipment, and, when necessary, provide complete electrical service directly to an offshore installation for positive and reliable continued operation of that installation's functions offshore. We have made it possible, through the use of SCR, for engine life to be extended because of the very nature of the system in selecting and using precise amounts of horsepower required for the job to be performed.

"All of this, of course, results in greater efficiency in the operations of companies operating offshore and a savings in energy, time and money." Capt. Rudy Vorenkamp, executive vice president of Acadian Marine, added the following to Mr. Halter's comments: "We feel that the new Mariner Class of offshore tug/supply vessels now being built represents a major development in our operations offshore.

The use of SCR, as has been noted, will greatly extend the usefulness of the typical vessel, and this was one of the prime objectives of this company in considering the use of the SCR system.

"We wanted to build and operate a more versatile and more flexible vessel, that could fulfill its operational objectives as a highly efficient tug/supply vessel, but when required, be placed into service, for example, as a small containership for feeder container service in a great many places in the world. We were immensely intrigued by the SCR concept as something new and different and highly practical in the industry, and a system that has proved to be workable elsewhere in the general maritime industry.

"Most important of all, it is a system that would give us high diversity and flexibility in our marine operations. The overriding consideration to that end was the flexible horsepower available.

Our operational capabilities will be expanded tremendously.

"Among the uses for this new class, we can operate as a tug/ supply vessel, an offshore-platform power-supply source without effecting our own power needs, and as a feeder containership.

And, we feel that this is just the beginning." S.J. Guarino, vice president of engineering, Halter Marine Services, explained the engineering advantages of the SCR system as follows: "From an engineering and design standpoint, we now have much greater freedom of choice in the placement of major equipment in this type of vessel.

We never had this before, being restricted in the design of the conventional diesel vessel, for example, by long propeller shafts or long exhaust runs. The carrying capability of the new vessel is enhanced and expanded because we can now place generating units just about anywhere we wish.

The SCR is capable of producing and applying the exact amount of horsepower required whenever or wherever it is needed — instantly and without decreasing the horsepower or power supply to other ship's systems and needs." Harry O'Brien, marine electrical consultant, worked with Halter Marine Services to develop the SCR system for its application in these offshore tug/ supply vessels.

To change the direction or speed of each propeller, the voltage of the powering generator would have to be changed and therefore, a failure of one dieseldriven generator results in a loss of twin-shaft maneuverability.

Also, since most electrically driven auxiliaries use a-c power, an independent auxiliary electrical system would have to be installed incorporating two or more dieselpowered generators. This type of system offers no real advantages over the standard gear-driven twin-shaft vessel.

"The offshore-drilling industry began using SCR systems years ago, and the system has been used also on icebreakers, ferries and other types of vessels. Primary use by the offshore industry has been on self-propelled offshore platforms to provide electrical services where needed.

"It is the first time SCR has ever been used on a workboat.

"Simply put, an SCR propulsion system is, and consists of, two or more diesel-powered a-c generators feeding power into a 'power pool' through a common switchboard from which electric power is gathered to drive propulsion motors. The latter turn the propeller shafts and wheels.

"From the switchboard, a-c power is fed to SCR units which convert the a-c power into d-c power and then controls the level of the power being fed to each propulsion motor. Electric power from the same switchboard is used to power bowthrusters, towing winches, and other ship's service equipment, including lighting, pumps, air compressors, etc.

"The power pool created is similar to an electrical powerplant for a small community, out of which you can draw as much power as you put into it and distribute this power to wherever you need it.

"In a conventional diesel-engine powerplant, torque and developed horsepower is proportionate between fixed minimum and maximum revolutions per minute (rpm). The diesel engine cannot run safely outside of this fixed rpm range.

"In a SCR diesel-electric propulsion system, maximum rated torque is available to the propellers from 0-percent rpm to 100- percent base rpm. Since horsepower equals torque times rpm, the horsepower increases as the rpm increases. But, even further, a d-c motor's rpm can be increased above its rated 'base rpm' by reducing the field current. From 100-percent base rpm to 200-percent rpm, available horsepower remains constant and maximum torque decreases. It should be noted also that the minimum rpm of the diesel engine is about 400 rpm or approximately six knots, which is its idle speed, whereas the speed of the electric motor can be controlled all the way down to 0 rpm or 0 knots.

"With the SCR system, using its field reduction capabilities in the d-c motors, the propeller shaft speed can be increased to the point that all available primary horsepower is being used by the propellers.

"The availability of 100-percent engine horsepower through the top 30 percent to 40 percent of propeller rpm enables the designer to design his propeller for top free running speed/hp/shaft rpm (at approximately 130-percent motor base rpm) and let the reduced speed/shaft rpm situation encountered under towing conditions take care of itself." Halter Marine Services stated that with SCR controlled propulsion, the tug/supply vessel now being built for Acadian Marine as the Mariner-Class will go farther, faster, quieter, using less fuel, carrying more cargo, with more maneuverability and more reliability, requiring less maintenance, and at a lower cost than conventional tug/supply vessels. 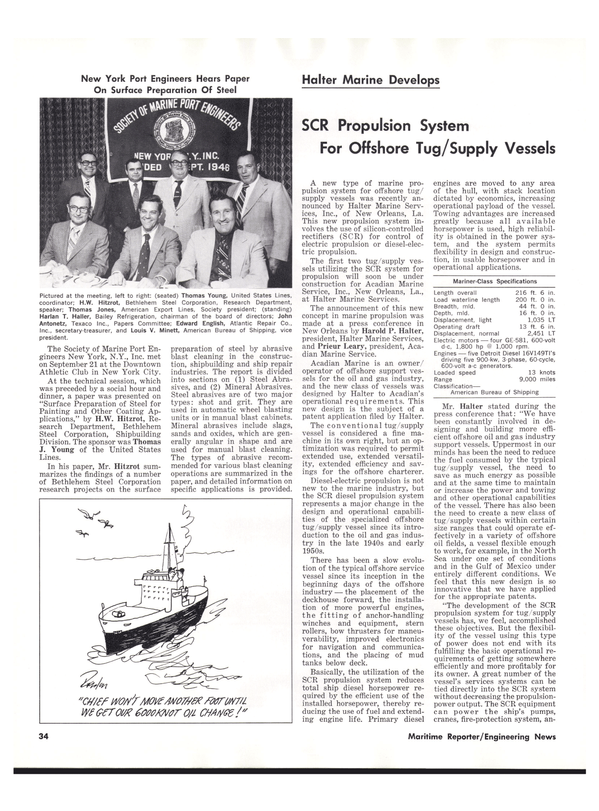