The 85th Annual Meeting of The Society of Naval Architects and Marine Engineers will convene at the New York Hilton Hotel on November 10-12, 1977, it was announced by Robert T.

Young, president of the Society.

"This is by far the Society's largest annual event," he said, "with more than 2,000 people from all segments of the maritime industry gathering to hear the technical presentations. Many will take part in the luncheon, banquet, and dinner-dance as well." At the simultaneous technical sessions on November 10 and 11, fourteen papers will be presented with subjects of enough variety to interest all the attendees.

President Young will give his annual address at the President's Luncheon in the Sutton Ballroom on Thursday, November 10. Featured on the program will be the presentation of several important awards.

Later in the afternoon, at 4 p.m., the annual Business Session will be held, where the members will act on proposed amendments to the Society's bylaws.

On Friday evening, November 11, the Annual Banquet will take place in the Grand Ballroom of the Hilton, with Mr. Young presiding. This is the most traditional part of the Annual Meeting, where the Society's highest awards are presented, and a major address is given.

The David W. Taylor Medal "For Notable Achievement in Naval Architecture and Marine Engineering" will be awarded to James J. Henry, chairman of the board of J.J. Henry Co., Inc., New York, N.Y. The Vice Admiral "Jerry" Land Medal "For Outstanding Accomplishment in the Marine Field" will be given to E. Scott Dillon, who was for 35 years with the U.S. Maritime Administration.

The banquet speaker this year will be Allen E. Schumacher, chairman of the board, American Hull Insurance Syndicate, New York.

On Saturday night, the Grand Ballroom will again be the setting for the annual Dinner-Dance, always a gala occasion and a fitting conclusion to the Annual Meeting.

The 14 technical papers to be presented are: Paper No. 1 —• "Hydrodynamic Design Basis for Navy Ship Roll Motion Stabilization" by Geoffrey G. Cox and Adrian R. Lloyd.

Synopsis—The hydrodynamic basis for the design and performance evaluation of navy ship roll stabilizers is covered in some detail, including the necessary background material. Major attention is devoted to antiroll fin/bilge keel systems, and procedures are illustrated by examples where possible, with the necessary analytical methods provided in the appendices. Also noted are the results of ship trials, model experiments and theoretical developments which have contributed to the present state of knowledge.

Paper No. 3—"On the Application of Hull Surveillance Systems for Increased Safety and Improved Structural Utilization in Rough Weather" by K. Lindemann, J. Odland and J. Strengehagen.

The concept of probabilistic design based on a proposed strength distribution is introduced. A suggested hull surveillance system has been worked out, where curves for the probability of failure are constructed.

Synopsis — Large bulk carriers operating in the Great Lakes represent a class of ships in which springing is more important than in oceangoing ships due to the unique characteristics of load and configuration. For this reason, some emphasis should be given to this phenomenon in the design of large Great Lakes vessels. The paper describes an extensive ABS research program, including the development of the SPRINGSEA II computer program, correlation of full-scale measurements, general trend studies and some design considerations.

Synopsis •—- Designing the first generation of 550,000-dwt tankers required research in the fields of hull structure and hydrodynamics, which is described in this paper. Factors which led to the selection of the twin-screw, twinrudder arrangement are outlined, and some results of sea trials are given.

Synopsis—The results of a threeyear survey of means for fuel conservation in the maritime industry are summarized. Topics covered include ship operational practices — speed reduction and rationalization of schedules — increasing the efficiency of hulls, powerplants and propellers, improved navigation aids, and a search for alternative fuels. A broad industry / government fuel conservation plan is formulated.

Synopsis — This paper presents the results of recently completed R&D and descriptions of ongoing research and development efforts, sponsored by the Maritime Administration, for the purpose of improving marine boiler reliability.

Synopsis—Dramatic increases in fuel prices have created unparalleled challenges to shipowners to maintain healthy profits. This paper reports on the conversion of Seatrain Lines' gas turbine twinscrew containerships and the developments which enabled bold modifications to burn blended residuals and the radical modification of one propeller. The economic benefits are included.

Synopsis — The authors discuss design techniques for surface ship stack casings and exhaust duct terminals. Traditional engineering problems associated with stack design are addressed and solutions given. The experimental data base for the design practices in plume prediction and stack gas temperature prediction is presented and discussed. An example is introduced. The appendix contains data from recent full-scale ship trials.

Synopsis -— The results of intensive studies of a concept called SEAMOD are described. Through interface standards, SEAMOD allows independent (and parallel) design and acquisition of ship platforms and payloads. The paper discusses the impact this "philosophy" would have on the design of a typical destroyer and future frigate, plus analysis of changes in the ship acquisition, construction, and modernization process (government and industry).

Synopsis — The Navy 3KSES acquisition program will demonstrate the feasibility of surfaceeffect ships (SES) technology for large oceangoing ships and will provide an assessment of its operational utility as a warship.

This paper provides an overview of the 3KSES program and details on the current design of the test ship. Performance capabilities are shown and design features are addressed by major SWBS weight groups.

Synopsis — The Trans-Alaska Pipeline System (TAPS) will deliver oil from Alaska's North Slope to the tanker terminal at Port Valdez. Tankers will then transport the oil to the various ports within the "Lower Forty- Eight." This paper presents the original real-time simulation analysis of the TAPS tankers within Valdez Narrows, describes the behavior of the man-controlled ship, and discusses simulation techniques.

Paper No. 13—"Reliability and Safety of LNG Shipping: Lessons from Experience" by Bertrand De Frondeville.

Synopsis—The LNG shipping experience, available from almost 3,000 cargoes unloaded since 1964 in Europe, Japan, and the United States, is reviewed f r om the standpoint of reliability and safety.

The record of upstream (liquefaction, loading ports) and downstream (receiving terminals) components of the LNG transfer system is summarized. Factors contributing to a successful safety record and improving reliability are analyzed, and citizen participation encouraged.

Paper No. 14 — "A Solution to the Series Production Manufacture of Aluminum LNG Spheres" by P. Takis Veliotis.

Synopsis — This paper describes an advanced manufacturing concept for the quantity production of large spherical aluminum LNG cargo tanks for use in the LNG shipbuilding program at General Dynamics Quincy Shipbuilding Division. Extensive detail is given on the series production manufacturing process, the use of automated welding techniques and the testing, insulation and transportation of the spheres to the installing shipyard. 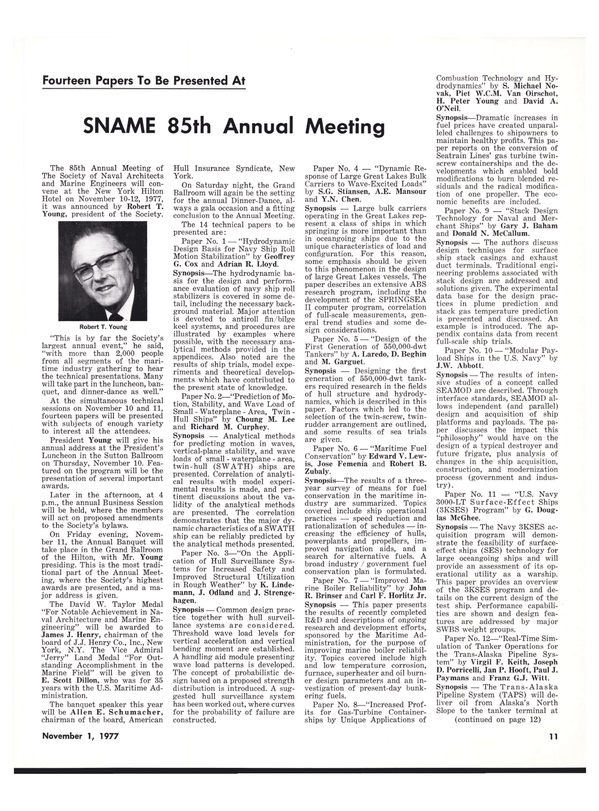