series of huge aluminum tanks nearing completion in Mobile, Ala., soon will be playing a significant role in helping the nation meet its energy requirements.

The 15 mammoth all-welded containers are being assembled by Kaiser Aluminum & Chemical Corporation on nearby Pinto Island for eventual use in three liquefied natural gas (LNG) ships under construction at Avondale Shipyards in New Orleans, La.

The 125,000-cubic-meter ships will be operated by subsidiaries of El Paso Natural Gas Company to transport natural gas at cryogenic temperatures (minus 260 degrees F) from gas fields in Algeria to East Coast markets.

The multimillion-dollar project is the largest of its type in LNG history, and the tanks are the first of their design ever built in this country.

The tank dimensions are impressive.

They are being assembled in sets of five, and vary in size and configuration depending on where they will be placed. The largest are the three that will be in the center of the ship, with each approximately 120 feet long, 120 feet wide, and 75 feet high.

More than 27 million pounds of Kaiser-developed 5083 aluminum plate, extrusions, and forgings are being used in the tank project.

Aluminum plate up to 1% inches in thickness is provided by the company's Ravenswood, W. Va., Works. Extrusions are from Kaiser Aluminum's Halethorpe, Md., plant; forgings from Erie, Pa., Works; and the total welding wire requirements of some 500,000 pounds are being supplied by the company's Newark, Ohio, Works.

The largest of the Conch-design rectangular containers weighs approximately 950 tons, while the smaller ones weigh approximately 700 tons. They are being assembled at ground level and will be lifted into place in the ships by a huge twin-boom derrick which has been specially constructed for the purpose at the Mobile site.

The first tank is scheduled for lift in approximately 30 days, according to T.H. Johnson, Kaiser Aluminum LNG project manager, and the ships are expected to be completed in 1978.

The tank fabrication itself is a two-step process. Individual component panels were assembled at a plant in Wilmington, N.C., using sophisticated processing equipment and automated welding techniques.

The subassembly panels, which weighed up to 60 tons each, then were transported to Mobile by a large oceangoing barge. The barge had a capability of carrying all 24 panels needed for one finished tank, plus the smaller brackets and parts.

Upon arrival in Mobile, the panels are assembled into a tank much the same as a ship is built, with subassembly fitting and welding into place. Workmen then complete installation of all internal tank piping and instrumentation.

Kaiser Aluminum developed special welding procedures for the project, with particular emphasis on quality control. All automatic butt welds undergo X-ray and tensile testing to insure that requirements are met, and stringent inspection is followed on all manual weld operations.

When the tanks are finished, they are transported into position for eventual placement aboard ship by specially designed crawlers.

Four of the 300-ton-capacity diesel-powered vehicles are used, one under each corner of the individual tanks.

While the aluminum containers are being fabricated in Mobile, Kaiser Aluminum also is insulating the three LNG ships at Avondale Shipyards. The company is the prime contractor for installation of a special polyurethane foam system in the holds of the carriers.

The insulation is a combination of balsa wood corners and tank support piers, nylon mesh reinforced polyurethane foam, and fiberglass. Although not in the insulation contracting business, Kaiser Aluminum developed the special cryogenic foam and perfected the procedures to install it in the LNG ships. In addition to its insulating characteristics, the system has been designed as a secondary liquefied natural gas barrier, with built-in structural support for the cargo tanks.

Quality control and testing procedures on the projects are continuous and exceedingly strict.

At Mobile, not only is there a stringent Kaiser Aluminum inspection program in operation, but one by the Coast Guard and by the American Bureau of Shipping as well. All shell welds undergo 100 percent X-ray inspection, and each finished tank is then hydrostatically tested to insure integrity of the container.

Hydrostatic testing procedures for the tanks were developed by Kaiser Aluminum, Conch, the Coast Guard, and the ABS. Each tank is more than half filled with water, which in the case of the larger tanks is approximately four million gallons, and then eight pounds of air pressure is placed on the surface of the water.

Testing and inspecting during the foaming operations at Avondale Shipyards and at the Wilmington plant are equally strict, not only by Kaiser Aluminum inspectors but also by the American Bureau of Shipping and the United States Coast Guard. 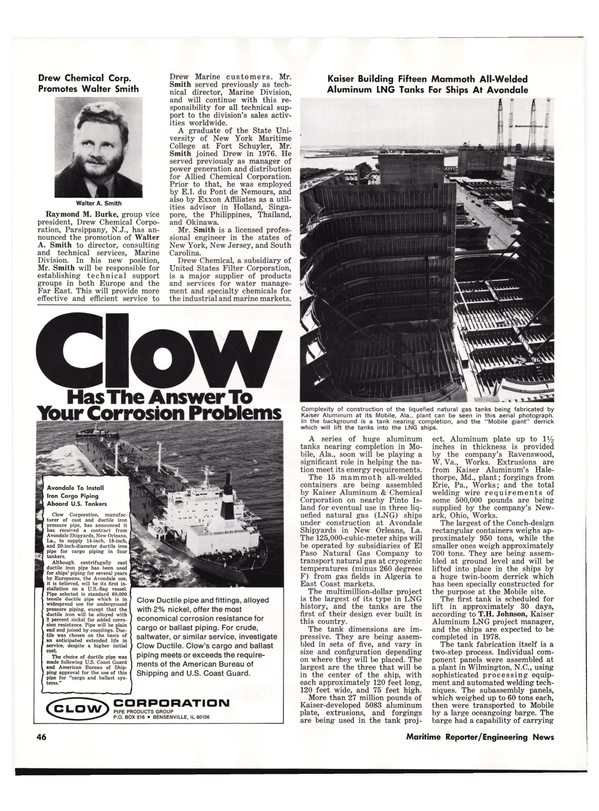