The National Shipbuilding Research Program Was Developed By The Maritime Administration And The Society Of Naval Architects And Marine Engineers To Serve All U.S. Shipbuilders.

The singular characteristic of the National Shipbuilding Research Program is its focus only on making the shipbuilding process more productive. Specifically, each of its many projects attempts only to cause a net reduction in the four essential shipbuilding resources, i.e., manpower, material, facilities and time.

In pursuit of this self-serving objective in the research category "Outfitting and Production Aids," which consists of many diverse projects, unprecedented and important relationships evolved.

These led to a strategy, growing in sophistication, which addresses the concerns of and frequently benefits other interested parties.

One prerequisite for the strategy results from the organization of the National Shipbuilding Research Program. The program acquires research subjects and guidance from The Society of Naval Architects and Marine Engineers' Ship Production Committee, whose membership represent all shipbuilders.

Management of the research is decentralized, by categories, among a number of shipbuilding firms. Program managers assigned by the latter are virtually free to visit in all shipyards to both acquire and desseminate ideas for productivity improvements.

Because of this, there is sufficient acceptance that the R&D program managers, although employed by different corporations, have credibility as representatives of the entire U.S. shipbuilding industry.

One of the first research projects undertaken, perhaps the simplest, furnished the most significant insight. The objective was to develop an acceptable electriccable connection device which would satisfy the requirements for modular construction. That is, it would permit "prewiring" of separately constructed deck houses, ships built in halves, etc.

Initial inquiries disclosed that apparently sufficient technology already existed, e.g., locked-cycle hydraulic tools for applying butt connectors and heat-shrink or prestretched tubing for restoring cable insulation and jackets. Further, it was learned that such splices were already being used in mines, aircraft and nuclear powerplants and that the U.S.

Coast Guard (CG) had permitted a nominal number of electriccable splices in ships in order to establish reliance based upon service experience. The inquiry also disclosed that applied research and systematic analysis are techniques recognized by ship classification societies for creating assurances commensurate with advancement in the marine industry in a more timely manner.

Accordingly, the research, performed by the Applied Physics Laboratory at the University of Washington, was directed to show that permitting more extensive cable splicing using existing methods does not present a hazard to a vessel or its personnel. The applicable request for approval was submitted and within four months a CG letter providing interim guidelines for immediate implementation was received. This was supplemented by a change to the Code of Federal Regulations (CFR) which specifically notes that splices are permitted to facilitate the shipbuilding process, ship modification and ship repair.

General adoption of splices was accelerated by the vigorous marketing efforts of an interested supplier, AMP Special Industries.

The supplier's role should not be underestimated. This is illustrated by another research project which produced a water-based cement, poured-type seal for the transit of electric cables through bulkheads and decks. It employs a simple technique for a dam and is approved as firetight, watertight and ratproof. Although it is already installed in at least two ship classes, implementation is not as rapid as for splices. Primarily, there is no supplier providing a marketing effort as performed for splice materials.

Alternatives to dangerous and expensive radiographic testing (RT) were investigated three years ago. This included evaluating of acoustic emissions and acoustic holography. Ultrasonic testing (UT), already in extensive use for naval work and provisionally allowed by ABS, was confirmed to be the only suitable alternative.

The researcher's identification of the UT checkpoint length which yields "the same order of reject rate as for RT" suggests that ABS qualified plate, welders and weld procedures are sufficient to justify acceptance of weld quality based upon random sampling and application of statistical laws.

This view was supported by a recent description of a Failure Analysis Associates' (FAA) report.

"When a supertanker developed welding cracks during construction, the firm was asked to determine whether similar cracks might occur in an already launched sistership and result in disaster.

Using statistical analysis, FAA reported that the risk involved in continuing to operate the sistership without modification was acceptable." Thus, there is already substantial thinking that suggests research to develop a statistical approach for assessing weld quality.

Since statistics is a form of applied mathematics, it is a logical tool to use for increasing owner, regulator and shipbuilder UT assurances while opening the way to more improvements in productivity.

Another project was undertaken to reduce the cost of shipboard electrical installations by expanded use of less costly and readily available material from the larger electrical equipment markets that exist for general, residential and specialized (tank farms, mines, etc.) construction industries. By this time the research management had adopted the same format for proposed changes to the Code of Federal Regulations (CFR) as used by headquarters members of the CG.

The reason being to perform every logical task, even administrative in addition to applied research and analysis, that would facilitate a regulator's understanding.

The main emphasis of these requests is on the necessity to adopt standards of the National Electric Code (NEC) and National Electric Manufacturer's Association (NEMA) unless there is an absolutely manifest need peculiar to ships and/or the shipbuilding process. Traditionalists and some suppliers who are devotees of the generality "commercial marine practice" are upset by the growing knowledge that the electrical equipment requirements of other industries, petrochemical for example, are frequently much more severe than those of the marine industry.

More of such knowledge obtained through applied research and analysis and widely disseminated is the only way to counter their negative reactions.

The CG is encouraging requests resulting from the research because they show that shipbuilders are collectively doing their "homework" instead of expressing frustration with the CFR. Further, the CG already has mechanisms for public participation in rule making as is now being demanded in Congress. No matter what the mechanisms are, they cannot do anything without responsible input.

The shipbuilders' collective thinking is included in such input through guidance furnished by the Ship Production Committee.

An added degree of responsibility is the wide distribution of such requests to the industry, via the Ship Production Committee, to ABS and to the Maritime Administration.

The CG has proposed research, to be jointly funded with MarAd and implemented by the National Shipbuilding Research Program, which would produce the standard needed to establish performance requirements. It would anticipate everything electric cable in ships must endure during construction, service, and when exposed to fire and flooding.

The same four-task approach is already incorporated in recommendations resulting f r om research on the use of plastics in ships. They propose similar performance standards and tests for plastic pipe systems and for the epoxy chocks used to align machinery.

Usage in ships is now inhibited because what plastic pipe and chocks are expected to endure during installation and service has not been adequately described to polymer suppliers.

Thus, the suppliers have not sufficiently described the properties of their plastic products to permit design with the same assurances that exist from knowledge of metals.

The plastic research is disclosing facts which encourage more dialogue between polymer suppliers, regulators, owners and shipbuilders. Unlike steel, plastics are light in weight, do not rust "like hell" in seawater nor in certain acids, are nonconductive but can be made conductive, are less energy intensive, and do not impose "in-process" problems with glare, fumes and noise.

Other research projects proposed, underway, and completed are also of significance to owners, regulators, designers and suppliers.

Multiplexing has not yet been started. The rectangular vent-duct standards, already published, improves productivity by identifying the minimum necessary components and sizes. It recognizes that many custom fittings and sizes were built to design constraints which far exceed the accuracy of basic flow factors.

The initial phase of photogrammetry, i.e., obtaining reliable information about physical objects by measuring photographic images, is completed. The report entitled "Photogrammetry in Shipbuilding" was issued in July 1976 by the National Shipbuilding Research Program. The technique is already in "solid" implementation in shipbuilding for producing very accurate LNG tank sounding tables, and for predicting the fit of large ships and offshore platforms built in sections. The tanksounding tables are clearly beneficial to regulators, owners and designers, but there are other applications, not in shipbuilding per se, that should attract their interests. Accurate measurements of bow waves or hull hogging and sagging are possible. The completed research proved the feasibility of photogrammetrically acquiring accurate digital representations from scale models of ships' machinery spaces. Future research will disclose the relative costs for using the process to automatically plot pipe system arrangement and isometric drawings, and serve as the input "device" which would permit a combined pipe-systems designer,/ model maker to put his inherently interference-free piping arrangements into a computer. Thus, the future work by the researcher, John F. Kenefick, Photogram- metric Consultant, Inc., should be of greater significance to designers.

The activities described herein require constant information exchanges with many people throughout the world. As a consequence the research management receives numerous requests for shipbuilding information. In a recent one-week period, nonshipbuilders who inquired included the University of Mississippi, two naval architects, and three suppliers.

Regarding suppliers, assistance is freely given, provided: a supplier's product would permit a significant net decrease in the required shipbuilding resources, i.e., manpower, material, facilities and time, and no proprietary information is involved so that everything may be freely distributed in the U.S. shipbuilding industry.

Finally, there is still another benefit to all parties in the shipbuilding process. A valuable and real end product of the National Shipbuilding Research Program is not specified anywhere. That is, in addition to producing specified end products, the Program has caused experts in various disciplines to acquire detailed knowledge of ships and the shipbuilding process. They comprise a tremendous potential for even greater advances. 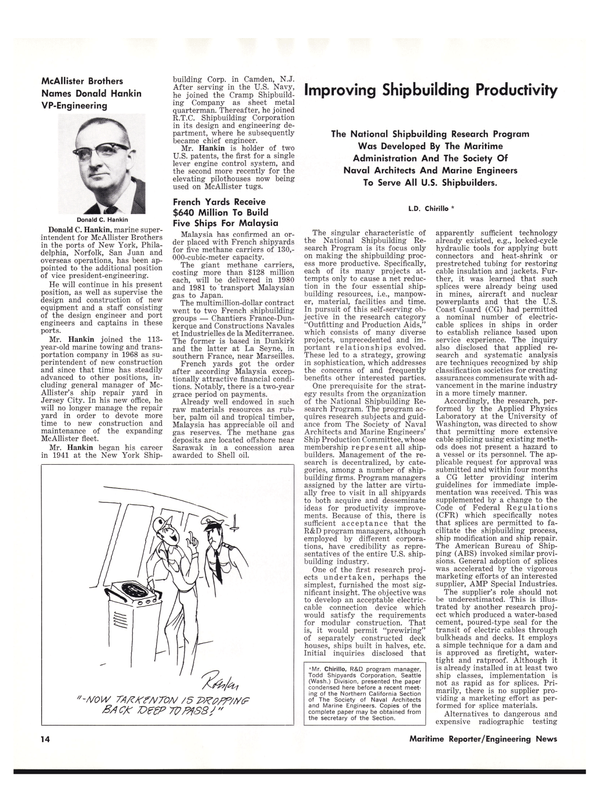