Stanley G. Stiansen, an assistant vice president of the American Bureau of Shipping, was elected a vice president of ABS at the semiannual meeting of the board of managers held in New York City, chairman and president Robert T. Young announced.

Mr. Stiansen joined the international ship classification society in 1947 as a Surveyor in the Hull Technical Department. In 1949, he resumed his educational studies, and worked in various marine-related activities. He was employed as a design supervisor of the hull scientific group for New York Shipbuilding Corporation for six years, as assistant naval architect in the new construction department of Moore McCormack Lines for five years, where he worked on the construction of the large passenger cargo ships, the Brazil and Argentina, and as an attorney with an admiralty law firm for three years.

In 1965, Mr. Stiansen rejoined ABS as a Surveyor in the Hull Technical Department. He was appointed Senior Surveyor of the Research and Development Division in 1970, chief research engineer in 1973, and an assistant vice president in 1976.

Mr. Stiansen holds a B.S. degree in naval architecture and marine engineering and an LL.B degree in law from the University of Michigan. As a senior in engineering college, he was awarded the ABS prize for excellence.

He also studied at the Graduate School of Engineering of Columbia University.

A registered professional engineer in the State of New York, Mr. Stiansen is a member of The American Society of Mechanical Engineers and The Society of Naval Architects and Marine Engineers (SNAME). He serves on two SNAME panels (Slamming, and Design Procedure and Philosophy), and has authored several technical papers presented at Society meetings. He is also a member of the Ship Structure Subcommittee, an organization sponsoring research in shipbuilding, and has served as chairman of the subcommittee since June 1976. In addition, Mr. Stiansen is a member of the American Concrete Institute (ACI) Committee on Recommended Practice for Use of Concrete in Fixed Offshore Structures, and a member of the International Association of Classification Societies (IACS) Working Party on Strength of Ships.

He is also a member of the International Ship Structures Congress (ISSC) Committee on Design Procedure. 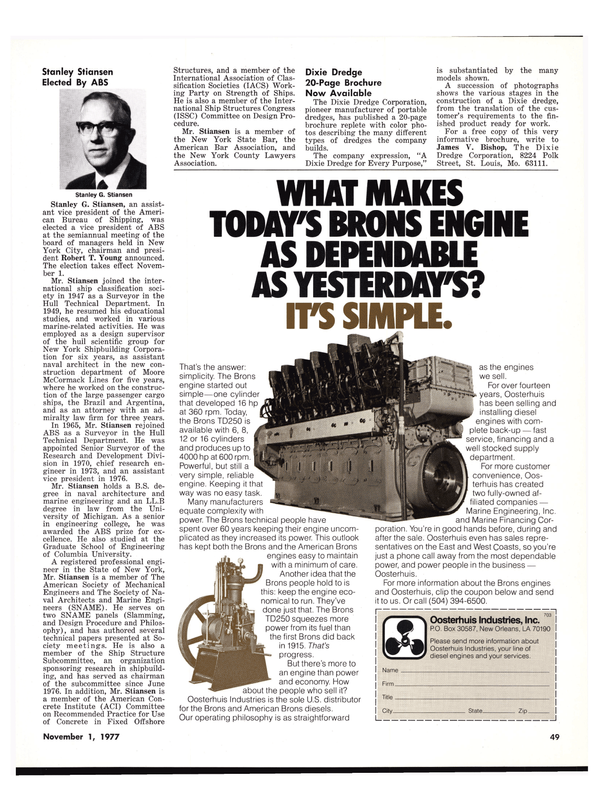