The Canadian Arctic Pilot Project is a combined pipeline/marine transportation system for Arctic natural gas to supply about 7.0 million cubic meters of gas per day to southern consumers. After a three-year development period, we are now very close to initiating the construction of various components within the project.

Generally these are: the gas gathering system at the gas field; a gas pipeline across the Island to Bridport Inlet adjacent to Viscount Melville Sound; the facilities at Bridport Inlet which include the gas liquefaction (or process) barge, the storage barges and the vessel loading equipment; the two ships which will bring the liquid gas from the Arctic to the southern terminal, and the southern regasification facilities.

This gas is excellent gas which requires very little pretreatment before being pipelined.

The methane content is very high —about 98 percent. Initially, eight wells will be drilled to supply the 8 million cubic meters per day required production with additional drilling being continued to maintain the production rate.

After chilled glycol treatment to remove water and to cool the gas to below the freezing point, the gas will be supplied to the cross-island pipeline.

The complete route of this pipeline is in permafrost so Alberta Gas Trunkline (AGT), who are the managers of that component, have chosen to use a buried chilled gas pipeline. The cold gas will not degrade the permafrost and *Mr. Miller, naval architect for Petro- Canada with particular responsibility for the Arctic Pilot Project, presented the paper condensed here before the recent Canadian Shipbuilding and Ship Repairing Association's Annual Meeting.

by burying will be isolated from the 40-cm deep active or growing area. During 1979, AGT conducted tests at Rae Point to identify the proper procedures for back filling the trench to avoid slumping, etc. The overland distance of the pipeline is about 160 kilometers and its diameter about 560 mm. This pipeline initially will not have any active compression since the gas comes from the field at about 8,500 kPa. As the field pressure drops due to depletion, compressions will be added to maintain the throughput.

At Bridport Inlet, the gas will be supplied to the process barge, where heat will be extracted from the gas stream by means of a multi-component refrigerant cycle.

The gas will be cooled to about — 162°C at which point it becomes a liquid at atmospheric pressure.

This plant will be constructed integral to a barge hull to allow building in an existing shipyard and then towed by way of Baffin Bay and Lancaster Sound to Bridport Inlet. The beam of the barge has been set to allow passage through the Panama Canal.

The output from the liquefaction process, about 12,200 cubic meters of liquid per day will then be transferred to two storage barges for holding until ready for loading onto the ships. These two storage barges will be designed so that they could be built in a Canadian shipyard.

The liquid gas will be loaded onto either of two large icebreaking carriers for transportation to the south. Each ship will be about 375 meters long overall with a beam of 42 meters and a draft of 11 meters in open water and 13 meters in ice. Displacement will be about 140,000 tons. The propulsion system will be ac/ac electric with three 44 MW electric propulsion motors, each driving an 8-meterdiameter fixed-pitch propeller.

The number of gas-turbine/electric generators will depend on the final choice of prime move and its power level. Candidate units include the LM 2500, the RB211 and the FT4, all gas turbines of the aero-derived type. These turbines will be fueled by a portion of the natural gas cargo; by augmenting the natural boil-off for the heavier load conditions. The use of the very clean natural gas is expected to reduce the maintenance costs and times significantly on the gas generator and power turbine over liquid fuel.

The other big plus factor is the security of supply of the fuel since our company analysts believe that the availability of liquid fuel cannot be guaranteed in the 1990s and after.

The 140,000 cubic meters of liquid cargo will be carried in five tanks in the vessel. At present the system for cargo containment has not been finalized—either the membrane or spherical tanks will be acceptable. The final choice may well be made based on the licensing arrangements which the shipyard has prepared.

Because of their size and complexity, it is unlikely that the ships will be built in Canada, although two shipyards are working on a method by which they will participate in a joint venture with an offshore yard.

The locality of the southern terminal is not yet fixed. Three sites are presently under consideration— Gros Cacouna, P.Q.; Saint John, N.B., and Strait of Canso, N.S. The final choice of the site will probably be dictated by external factors.

The process of liquefying the gas stream is quite simple in principle.

It involves removing enough heat from the incoming stream so that its temperature is reduced to about — 162°C. The process chosen will be that marketed by Technip of France. Most of this heat exchange process takes place inside the cryogenic heat exchanger which will be the largest single item of equipment on the barge.

Refrigeration for the liquefaction process will be supplied by three Elliot compressors absorbing a total of 61 MW, and being direct driven by a Cooper power turbine driven by a Rolls-Royce RB211 gas generator unit. Inlet air for these power units will be drawn through a marine type air filter and silencing system to remove salt and moisture. In certain conditions this inlet air will require preheating to avoid ice build-up.

Boil-off gas and process flash gas will be recompressed for use as fuel by a 3-MW compressor which may be electric or gas-turbine driven.

Electrical service power will be provided by two gas-turbine-powered generator sets, each at about 10 MW. All these gas-turbine units will be fired on natural gas.

The barge hull itself will be about 132 meters by 32.3 meters by 15.6 meters with a full length "industrial" building type superstructure.

The hull will have a complete double skin and will be strengthened to allow for being frozen into an intact ice sheet.

Because the barge will not be drydocked for at least 20 years, some special features will be included in the specification. Some of these features are: access must be allowed to all the inside surfaces of the shell; there will be a high adhesion outside coating system; there will be an impressed current system for corrosion protection ; arrangements must be made to allow the maintenance of ship side valves while afloat, and a system of identification marks placed on the outside of the shell plating to allow divers to orient themselves.

The plant to be installed on this barge is very complex and, of course, includes a considerable amount of cryogenic piping and fluid handling equipment. A typical material for this service would be stainless steel, and due to the flammable nature of the fluid, the highest standards of design and assembly procedures must be used throughout the cargo handling system.

The process barge hull will be divided into five separate areas by full and intact fireproof bulkheads.

Personnel in transit through these bulkheads will be required to use air locks. Air pressure within each of these five spaces will be controlled by their individual heating and ventilation units so that a pressure gradient always exists from the least hazardous area (highest pressure) to the most hazardous area (least pressure).

All spaces will be fitted with detection systems for combustible gases, temperature both hot and cold, and flame. Extinguishing systems will include water sprinkler, dry chemical, Halon, etc.

The major control complex for all the Bridport facilities will be located at one end of the barge. In this space will be controls for the gas production and field processing at Drake Point; the crossisland pipeline; the liquefaction process; the storage process; the interface with the ships for the loading process; and all the communications systems. These systems will be monitored automatically and constantly by a computer- based system. This will reduce the required staff on site to about 40.

To allow the plant to operate continually in a system which sees ship arrivals vary from one every eight days in summer to one every 16 days in winter, a "buffer" or storage capacity of 200,000 cubic meters is required. This will be contained in four tanks mounted in and integral to two barges.

Each barge hull will be about 175 meters by 36.5 meters by 23.0 meters. As with the process barge these hulls will be strengthened in way of the ice belt for the voyage north; however, unlike the process barge which will float inside its own lagoon, the storage barges will be grounded on a gravel pad in a dewatered bermed area. This is an advantage in many ways when the range of displacement of each storage barge can range from 17,000 tons (dry) to 60,000 tons (full). The liquid cargo will be stowed in tanks with a membrane containment system. Either the Technigas or Gaz Transport system will be acceptable. For internal inspection and insulation monitoring purposes these storage barges will be double hulled throughout.

The successful docking of the tankers in an environment which grows 2.2 meters of ice each year is obviously of paramount importance.

To aid these maneuvers, an ice management system has been designed — this will distribute warm water effluent (at about + 10°C) below the ice cover adjacent to the wharf. The heat content of this water, about 100MW, will be obtained from the heat exchangers used in liquefying the gas stream. This heat will inhibit the ice growth to less than one meter at the end of winter within an area of 100,000 square meters.

This ice management system has been extensively investigated in theory and the design will be finalized in a large scale-model within a cold room. This model will correctly grow ice, distribute warm water below the ice, and maneuver a vessel in and out of the wharf area. This model will cost about $300,000 and take about five months to build and operate.

About half the total costs of the Bridport facilities goes into civil works, including roads, an airport, accommodations and, of course, the wharf and loading facilities for the ships. The other half will go into the process and storage barges.

MARINE DIVISION Petro-Canada and its partners in the Arctic Pilot Project believe that resource movements from the Arctic will commence on a yearround basis in the 1980s. The Arctic Pilot Project contains all of the elements of these transportation systems, and by its successful implementation and operation will demonstrate the economic viability of such systems. 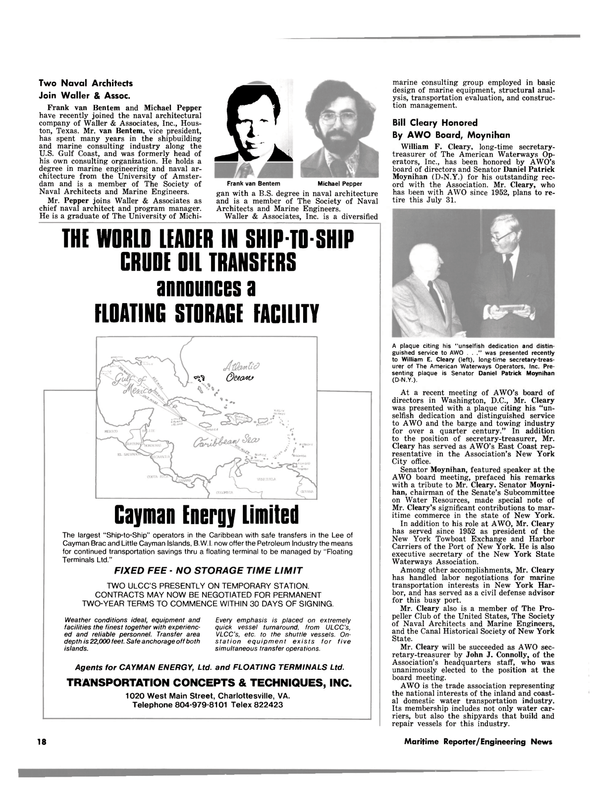