The new Dixie dredges, which are part of a U.S. State Department A.I.D. project, employ a "tilting spuds system" which will allow the dredges to pass under bridges and other obstacles without having to remove their spuds.

The Egyptian Dredging Company will build the hull side sections for the dredges, which will then be employed throughout Egypt to maintain and construct irrigation canals.

Each of the dredges is a modified Model CS-2-14 (EDC) Dixie dredge. The dredge pump in each craft is powered by a Caterpillar D-348 turbocharged and raw water aftercooled diesel engine developing 725 continuous horsepower.

The service water pump, along with the hydraulic system and generator on each dredge will be powered by a Caterpillar 3306 turbocharged and raw water aftercooled diesel engine producing 175 continuous horsepower.

The overall hull length is 40 feet long by 10 feet wide, and the dredging ladder, with an 18-foot removable section, extends 45 feet, enabling the dredge to dig to a depth of 33 feet below water level. Other equipment to be provided to the Egyptian Dredging Company includes f i v e 3 6 - f o ot dredge tender boats, two 32-foot crew boats, and spare parts and a c c e s s o r i e s needed to support dredging operations.

D e l i v e r y of the fifth Dixie dredge, completing the $3.5-million contract, is scheduled before the end of the year. 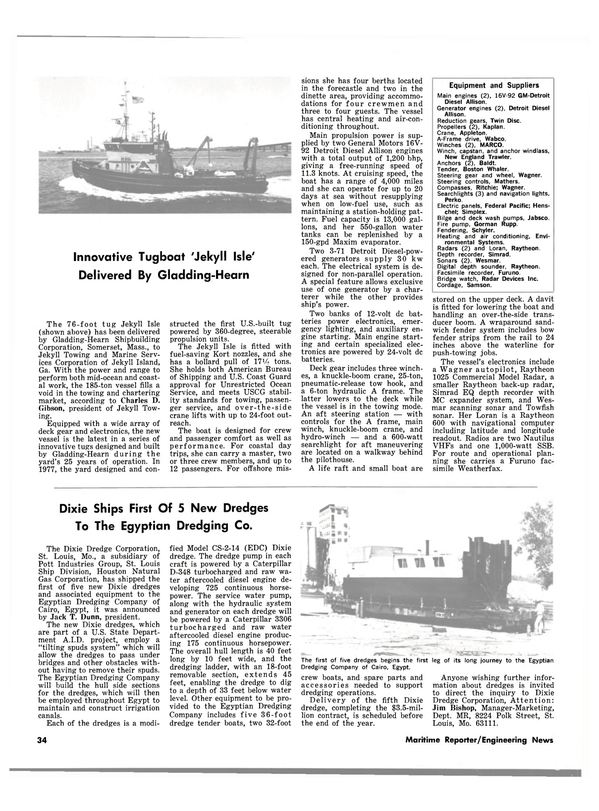