The Fairbanks Morse Engine Division of Colt Industries has received an order for four large Colt/Pielstick marine diesel engines with auxiliary equipment from Lockheed Shipbuilding and Construction Company of Seattle.

Announcement of the $8.6-million order was made by Thomas J.

The four 16-cylinder, 8,500-bhp engines represent the first shipset of propulsion machinery for the new amphibious, LSD-41 class dock landing ship program planned by the Naval Sea Systems Command. Earlier this year an order for $4.3 million was received by Fairbanks Morse for two engines of the same size and configuration with auxiliary equipment for installation in a training and testing facility at the Philadelphia Naval Shipyard.

There, the Navy's Land Based Test Site will be used to simulate actual operating conditions of the ship propulsion system, and for operation training.

When funded, the LSD-41 program will involve a number of ships, each powered with four Colt/Pielstick diesel engines. Use of diesel propulsion in these ships offers distinct savings in fuel consumption.

The Navy estimates that eight of the new ships, in replacing eight of an older class, will save more than 20 million gallons of fuel per year. As the diesel engines provide improved fuel consumption, the LSD-41 ships will carry less fuel and still meet cruising range requirements. 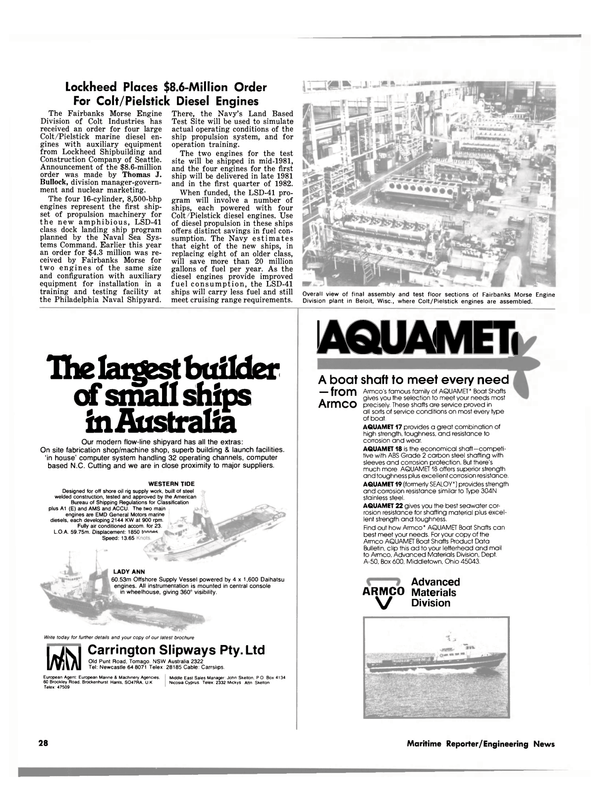