First American Bulk Carrier Corporation, Orange, Texas, has applied to the Maritime Administration for a Title XI guarantee to aid in financing the construction of two bulk/container vessels.

First American, a new company owned by the Pension Fund of the Marine Engineers' Beneficial Association and General Shipholding, S.A., a firm organized in Luxemburg, had previously applied to MarAd for construction differential subsidy for these ships.

Each of the 38,580-dwt ships, to be powered by diesel engines, would have two onboard, 30-ton gantry cranes and capacity to carry about 1,300 TEUs. They would be used in worldwide trading, primarily between the U.S., Europe, and Australia. Levingston S h i p b u i l d i n g Company, also of Orange, is the proposed builder, with delivery estimated for September 1982 and August 1983.

The estimated cost of each vessel is $78 million, $36.3 million or 46.5 percent of which will be paid by the construction differential subsidy. Therefore the Title XI guarantee, if approved, will cover $31,275,000 or 75 percent of the $41.7 million that will be the owner's cost for each ship. 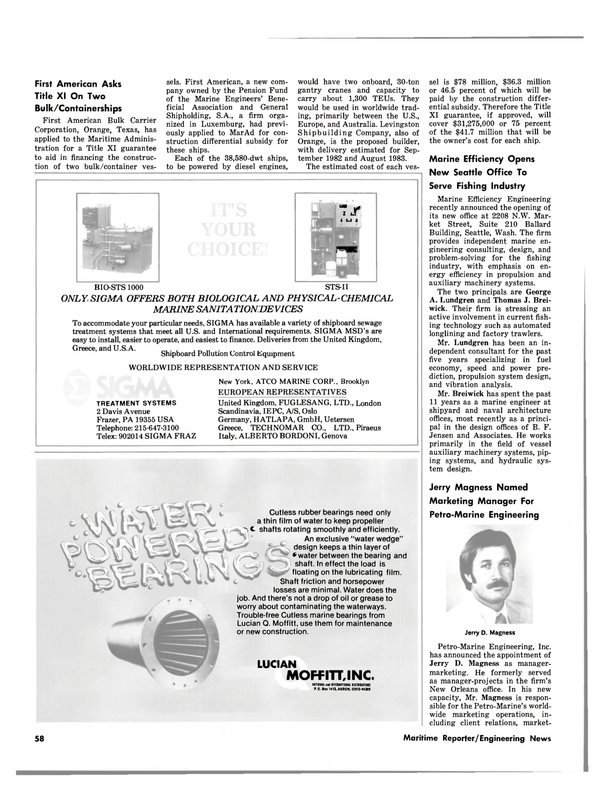