The "Sea-Shed" is a king-sized, open-top, multipurpose container which forms the "heart" of an innovative marine transportation system. Designed primarily for the stowage of the large number of commodities which comprise the neo-bulk cargo market, the Sea-Shed has been configured to a s s u r e c o m p a t i b i l i t y with the standard barge systems adopted by both the U.S. and European waterways. This container also has been sized to permit efficient handling and stowage in the large open holds of most bulk and neobulk ocean carriers in service.

The dimensions of the Sea-Shed are based on multiples of the standard I.S.O. container. Sea- Sheds also can be accommodated in the cellular compartments of containerships and combination container/breakbulk vessels. The key to the system concept lies in the unique patented design features of the container.

The basic marine applications include its use as a portable ship's hold, shoreside transit shed, domestic container f o r s t a n d a rd sized U.S. inland waterway hopper barges, and as a cargo box which can serve to convert harbor lighters into covered barges.

As a system, Sea-Shed offers the potential for barge or ship operators to expand their market opportunities, increase capacity utilization and total earning power.

Since it can be readily adapted to the many thousands of standard barges presently operating on the large river networks in the U.S. and Europe, the system can be introduced without disturbing arrangements which have been the culmination of many years of development. It enables operators of existing tonnage to make a slow and cautious transition from today's cargo handling and shipping practices to the more elaborate systems of tomorrow.

The Sea-Shed What is the Sea-Shed? The Sea- Shed is essentially a supersized version of the standard I.S.O.

Built around a framework of four corner posts, it is tied together longitudinally by top rails and lower rails which also tie the end frames together to form the box, Figure 1. The corner posts are fitted with complimentary upper and lower castings to facilitate rapid transfer via floating or shoreside heavy-lift cranes and to enable stacking on river barges, in the holds of oceangoing vessels or at shoreside facilities. However, the Sea-Shed incorporates certain unique design features which c l e a r l y distinguishes it from any other type container of either standard or nonstandard design.

The key feature of this "super" container lies in the design of its bottom structure. A rectangular hatch frame which occupies most of the inside floor area is secured to the base cross members and bottom side rails. Hatch covers comprising fore-and-aft bifolding panels are fitted into this frame.

The container thus normally has a continuous floor, but when the covers are folded up, it has a large hatch opening, providing access to the cargo stowed in another container placed beneath it. The fold-up floor feature provides for considerable flexibility in cargo operations.

The container is fitted with a roof hatch frame for placement of watertight pontoons. These covers would be used only on a container exposed to the weather, such as "he top container of a stack of containers, or individual containers temporarily stored shoreside.

Roof covers would not be required for a shipboard cargo operation.

Shipboard Use The system provides shipowners with more alternatives during periods of depressed shipping rates. A "portable" 'tweendeck arrangement enables the operator to quickly shift from one cargo to another or from one trading area to another as market demand dictates. This type of flexibility can take on special significance for ocean carriers engaged in short-term-charter a g r e e m e n ts where demands for 'tweendeck general cargo space or open-hold single deckers for neo-bulk such as lumber, newsprint, etc. along with certain bulk cargoes tends to fluctuate.

Once emptied of cargo, the Sea- Sheds can be shifted from hold to deck or vice versa to suit the special stowage requirements for either the base-haul or back-haul voyage.

The Sea-Sheds can be positioned and restrained in the ship's hold by a heavy-duty guide structure similar to the type presently in use. Double-bottom reinforcement would, of course, be required to compensate for the highly concentrated corner-post loadings.

Sea-Shed installation would not require the use of shipyard cranes.

This can be accomplished at the ship's normal loading berth via conventional-type floating derricks or mobile truck cranes. The tare weight of the Sea-Shed would, of course, vary according to size and construction materials. However, the largest size steel module envisioned (40-feet long by 25- feet wide and 12-feet deep) would have a tare weight slightly in excess of 30 tons.

The flexibility of the Sea-Shed provides river operators with a means for introducing entirely new distribution concepts on inland waterways.

MarAd Studies Sea-Shed The Maritime Administration awarded a contract to M. Rosenblatt & Son, Inc., naval architects, to study the Sea-Shed concept as it would apply to containerships.

This report stated, in part, as follows: The Sea-Shed concept is that of a removable modular 'tweendeck conversion system for containerships to provide them with the capability to carry outsize and heavy unit loads which cannot be containerized in standard I.S.O.

containers. Sea-Shed modules are large open-top containers having work-through floors designed for insertion into container holds having at least three laterally adjacent 40-foot container cells. Depending on the depth of the hold, the modules may be installed in a stacked arrangement.

When Sea-Sheds are installed in the ship, their work-through floors are in effect 'tweendecks and may be likened to the folding 'tweendeck hatch covers on breakbulk cargo ships. The Sea-Shed modules will be inserted into the ships by dockside cranes. Cargo may then be loaded on a unit or breakbulk basis.

Adoption of the Sea-Shed concept will provide U.S.-flag containerships with a v e r s a t i l i ty which will make possible ttie'utilization of these ships for handling outsize commercial and military cargoes.

The Sea-Shed development is a response to the need to improve American merchant marine ship capacity utilization in commercial and m i l i t a r y applications. The general decline in the number of breakbulk U.S.-flag merchant cargo ships and the increased trend toward the construction of "full" containerships has deprived commercial shippers and the military of ships with the capacity to accept outsize cargo. 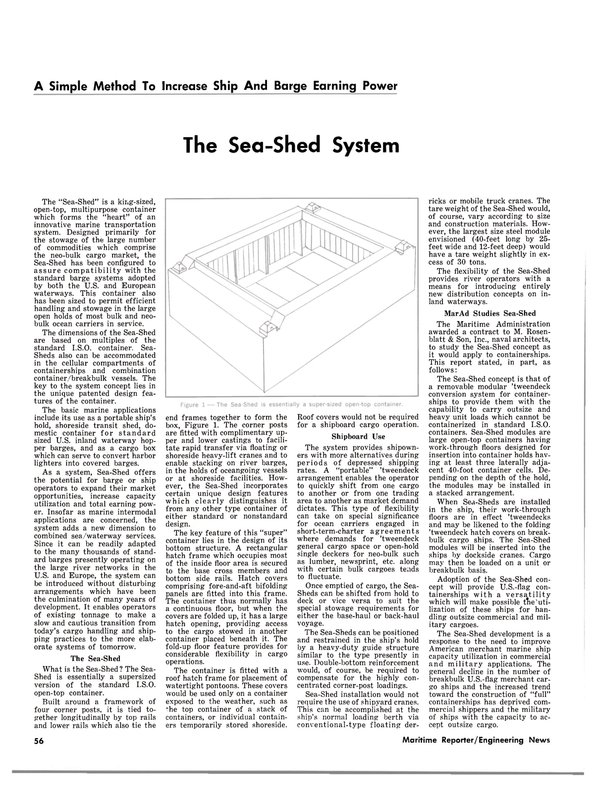