The Rhine-Schelde-Verolme Group of The Netherlands has announced that with the reorganization of Group activities there will be a change in the representation in the United States previously carried out by Rhine- Schelde-Verolme (North Ameri- Cci) Inc The VDSM Group (Verolme Botlek) c o n s i s t i n g of Verolme Dock and Shipbuilding Company B.V. and Verolme Tankcleaning Company B.V. will be represented in the U.S. by Midland Marine Corporation, One Penn Plaza, New York, N.Y. 10119. Martin A. Langeveld, f o r m e r l y with Rhine- Schelde-Verolme (North America), Inc. and Verolme U n i t ed Shipyards (North America), has joined Midland Marine with primary responsibility for the activities and interests of Verolme Botlek in the U.S. and Canada.

The combined management of Wilton-Fijenoord and Rotterdam D o c k y a r d Company also an nounced the formation of Wilton- Rotterdam Dockyard Group, which will result in a closer coordination of the activities of these companies. This group will be represented in the U.S. by Ampower Corporation, One Marine Plaza, North Bergen, N.J. 07047, who represented Rotterdam Dockyard Company from 1959 to 1973. This activity will be carried out by Robert H. Imlah, vice president of Ampower, and Frank R. Mc- Kenna, who has handled the activities of Wilton-Fijenoord since 1965. 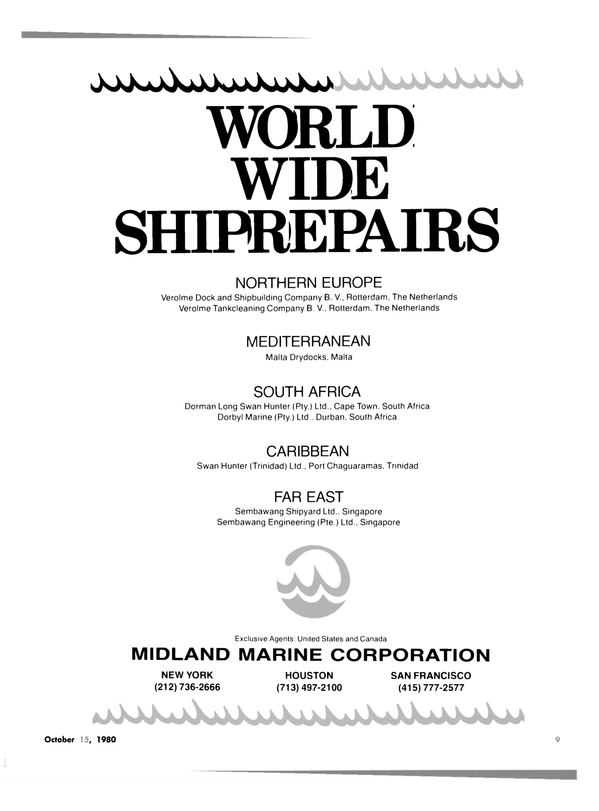